The opening night of CATS in Sydney proved to be quite the occasion. Although it was a dull, dismal and even stormy evening, the rain did not dampen the excitement, nor did it compromise the glamour of the “Who’s Who” of Sydney. With stars flaunting their outfits on the red carpet and posing for press photos, the street buzzed with camera flashes and great anticipation, and with great reason! There are so many components and historical facts behind this musical that contribute to it’s greatness and popularity.

For those new to the musical, CATS is based on “Old Possum’s Book of Practical Cats” by T.S. Eliot, a popular book of poems for many children. Originally written for his godchildren, the words were penned and published in 1939 as a collection of children’s verses. Fast forward a few decades and this cultural classic inspired the now-famous Broadway musical that first premiered on the West End in 1981. [Fun fact: CATS is considered the fourth longest-running musical in Broadway history.]

Composed by the celebrated Andrew Lloyd Webber, the musical conveys the story of a tribe of cats known as the Jellicles. At the time Webber was creating melodies for the musical, dance was exploding in Britain. It was the late 1970s and new styles were attracting dancers from all over the country. Embracing the momentum of dance during that era, he took the opportunity to create dance music for the theatre. Influenced by T. S. Eliot’s work, Webber, the musical dramatist, toiled endlessly to formulate a composition that would in turn introduce these classic verses to a new generation, and leave a legacy that remains a success still to this day.

For this production, Act I was set at midnight. One by one the cast of CATS emerged, dressed in unitards and adorned with cat-like features and stylised makeup, not forgetting the eighties’ leg warmers that complimented choreographic movements of the day. They roamed their way through the darkly lit auditorium with feline-like movements, and then up to the stage that was set up as a back alley junkyard. Slowly as the lights revealed the setting, the proud cats invited the audience into their world.

Act I continued as the characters were introduced and differentiated. These included: Victoria, the Young White Cat; Jennyanydots, the Old Gumbie Cat; The Rum Tum Tugger; Rumpleteazer; Old Deuteronomy; Bustopher Jones; Macavity; and the famous glamour cat, Grizabella, played by Delta Goodrem. Each represented a unique persona, style and vocal melody that contributed to the story. 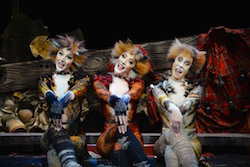 The characters Demeter, Bombalurina and Jellylorum from the ‘CATS’ Australian Tour. Photo by Hagen Hopkins.

Following the explanation, Victoria, the white cat, initiated the beginning of the Jellicle Ball. It was here that the Munkustrap announced that Old Deuteronomy would select a cat to be reborn into a new life on the Heaviside Layer. After the ball, Grizabella returned and attempted to dance, yet her age restricted her ability to do so and the other cats shunned her. In a state of deep melancholy, she teased the audience with the short version of Andrew Lloyd Webber’s Memory.

Act II was set after the Jellicle Ball and Old Deuteronomy presented his song of What Happiness Is, in reference to Grizabella. Confused and confounded, the other cats were not able to comprehend his serving of wisdom, so he repeated the song.

With a loud crash and bang, Macavity stole the stage and had his moment of glory, “the master criminal that is never found at the scene of the crime!”

The story moved on and returned to Old Deuteronomy. As he sat down, the old, yet beautiful, Grizabella returned and was permitted to address the tribal gathering. At first her lonely and weakened disposition had no effect on the other cat members. However, the tides changed and the tables turned. Grizabella was the chosen one to go to the Heaviside Layer, to be reborn into a new Jellicle life. It was the moment the audience was waiting for, the extended version of Memory. Goodrem’s voice was absolutely incredible and she proved to be in a class of her own. Her projection and power, yet graceful control, filled the auditorium. The theatre was hushed with silence in order to hear every highly professional note. If only the song lasted longer! Goodrem was stunning and took the show to a whole new level; as surely envisaged by Webber!

This was a wonderful and successful evening for the cast and crew of CATS!