In an evening that celebrated the best in Australian dance, the 2015 Australian Dance Awards brought together some of Australia’s best dancers, dance companies and dance elders to present 13 awards and welcome two new members to the Hall of Fame.

Daniel Gaudellio & Vito Bernascon in Queenland Ballet’s ‘Romeo and Juliet’, nominated for the Award for Outstanding Performance by a Company. Photo David Kelly.

Marilyn Jones OBE and Dr. Elizabeth Cameron Dalman OAM were formally inducted into the Hall of Fame for their distinguished contributions to dance, to loud and long applause, in front of representatives from Australia’s professional dance companies. The Lifetime Achievement Award was given to Marilyn Rowe, who was unable to attend due to an illness. The award was received on her behalf by Leigh Rowles of The Australian Ballet School.

Performances included Dancenorth, who flew in direct from Townsville on Saturday to perform, with two former ADT stars Kyle Page and Amber Haines performing a section of their new work, Syncing Feeling; Melbourne City Ballet came off tour from Sydney with the pas de deux from Helena & Demetrius; and the doyen of ADT, Dr. Elizabeth Cameron Dalman OAM, delayed a trip to Taiwan so she could restage early ADT work Creation with the current company.

The Australian Dance Awards were presented by Ausdance, with Harlequin Floors and the Adelaide Festival Centre. Dance Informa was the proud media sponsor. 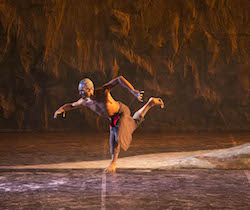 “After an outstanding career as an internationally acclaimed principal artist with The Australian Ballet, Marilyn dedicated her life to The Australian Ballet School and its students, helping shape the future of young dancers through her leadership, vision and innovative education programs…”

“For a well-constructed work that was polished, powerful, poignant and a real celebration of youth dance, and for a confident, impressive performance by a cohesive ensemble.”

“For her dedication to excellent teaching for over 50 years, for expanding her students’ vision through exposure to the international classical ballet world, and for a truly lasting legacy.”

Outstanding Achievement in Commercial Dance, Musicals or Physical Theatre – Gravity & Other Myths for A Simple Space

“For a thrilling hour of daring feats of balance, strength and skill, impressive teamwork and creativity, astounding acrobatics, and some dangerous and original choreography.”

“For a bold and engaging collaboration of dance and music with wonderful choreography and outstanding editing, direction and production.”

“For beautifully sculpted and clever choreography presenting a fascinating exploration of identity, displacement, loss and mortality, and for a wonderful blend of film, photography, lighting and dance.”

“For a large-scale, captivating, cross-cultural dance performance fusing contemporary and traditional dance, championing reconciliation and uniting people in a wonderful celebration of dance and community.”

“For his generosity and extraordinary talent in capturing the spirit of dance and dancers through his brilliant photographs, and his skill in collaborating and discovering new ways to present dance through visual media.”

“For an exquisite, compelling and immersive production exploring intimacy and human relationships within disability in a personal, honest and provocative dance theatre performance.”

“For an outstanding and radiant performance that showed flawless technique, artistry and intelligence; a masterful portrayal of the metamorphosis from innocent to fallen woman.”

“For his impressive physicality, exceptional dance technique, powerful characterisation and a magnetism and integrity that commands attention.”

Outstanding Performance by a Company – Queensland Ballet for Romeo & Juliet

“For a captivating production that demonstrated excellent solo and ensemble work, brilliant costumes, sets and designs, and a unified company performance that was of an international standard. “

Congratulations to the 2015 Hall of Fame inductees:

Marilyn Jones OBE, Australia’s first new prima ballerina of The Australian Ballet, is an iconic figure of dance. From her first season with the company to her last, she sustained an innately lyrical aesthetic. Marilyn’s warmth and humility in such classics as Swan Lake, Raymonda, Sleeping Beauty and, perhaps above all, Giselle with her (then) husband Garth Welch, made her a favourite with audiences nationally and abroad.

Following her performance career, Marilyn taught at the National Theatre Ballet School and was artistic director of The Australian Ballet (1979-1982), where she established the Dancers Company involving final year students of The Australian Ballet School. In 1995, she became Artistic Director of the National Theatre School, and later, Senior Lecturer and Coordinator of Classical Dance at the Western Australian Academy of Performing Arts.

Today, Marilyn is the artistic director of the Australian Institute of Classical Dance, which she established to produce a new Australian ballet-training syllabus. In 1996, she launched the much-valued Dance Creation competition for emerging choreographers. Marilyn continues to lead the Institute’s valuable work, which comprises workshops for students, teachers’ seminars, examinations, scholarship competitions and residencies at the Royal New Zealand Ballet School and the Houston Ballet School in Texas, USA.

One of our greatest classical dancers, Marilyn has inspired and influenced generations of young dancers throughout her distinguished life in dance.

Nationally and internationally renowned as a choreographer, teacher and performer, Elizabeth has been passionate and dedicated to dance and the arts for her entire life. Part of a generation of artists seeking a spiritual and holistic way of expressing themselves, she has helped to define Australia’s cultural identity and expression in the modern world and has made a significant and lasting impact on the development of Australian contemporary dance.

A visionary as well as a pioneer, Elizabeth has always been an advocate of human rights — as expressed in her many creative works — actively supporting Aboriginal rights, women’s rights, the environment and contemporary arts. Leading a generation of artists who were seeking a spiritual and holistic pathway through their art in order to communicate and explore ways to interpret the world, she has contributed to defining Australia’s diverse cultural identity and has made a significant and lasting impact on the development of Australian contemporary dance.