At just 24 years of age, Ako Kondo has become the Australian Ballet’s newest Principal Artist. Her promotion was announced on stage at the Sydney Opera House last month after a performance of Giselle in which Ako danced the lead role partnered by her professional and real-life romantic partner, Principal Artist Chengwu Guo. The achievement comes after years of hard work in Japan and Australia, including five years with the AB.

Dance Informa’s Grace Gassin speaks with Ako Kondo about making it to the top of the ballet profession and what it took along the way. 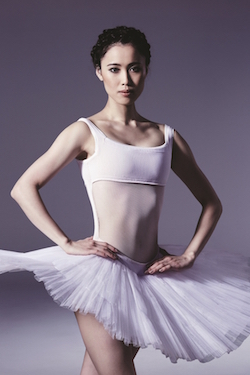 Congratulations on your promotion! What did you do to celebrate? I heard your mother flew from Japan to be there for the big announcement!

“Yes, well, she was but she didn’t know it was going to happen! It was a surprise to everyone actually. My mum just came to watch me do Giselle from Japan, and so just happened to be in the audience. Afterwards, we went home and my mum said ‘I’m so sorry I didn’t cook something special for you, I didn’t know’. We just had a home-cooked meal with some drinks, you know, chill out, a quiet night, and then on the weekend we had a big dinner, a celebration with friends.”

Did you get much in the way of congratulation from the other Principal dancers?

“Yes! Everyone was really nice. Madeleine Eastoe, who is retiring in July, actually gave me big flowers the next day with the words ‘Principal Artist Ako Kondo’ and I just felt that was really lovely. But you know, all the principals congratulated me straight away — because I was the lead dancer on that night, most of them did that by calling and texting. My boyfriend [Chengwu Guo] actually, who is a Principal, was dancing with me, partnering me as Albrecht. It was so special to have him on stage as well.”

I know you’ve not had much time yet as a Principal, but in the little while since your promotion, have you noticed differences, perhaps in your schedule, in your dancing routine compared to the one you enjoyed as a Senior Artist?

“My schedule has actually remained much the same which is interesting, but it’s only been a few weeks!

One night though, I was signing myself off after the show and I couldn’t find my name on the list because I was looking through Senior Artist and my friend was like, ‘No, no, you’re a Principal now’, — my name was under ‘Principal’. That night I did actually feel a bit like ‘Oh wow, I got promoted’. I haven’t moved my changing room to the Principal room yet though and it’s still a bit unreal, I’m still thinking ‘Did that really happen?’

For the next programme though, I’ve been taken out of all the soloist roles and am just doing principal roles like Cinderella in Cinderella with the principal artists, and dancing with principal artists. It just makes me feel, well, really honoured and that I’m taking on a big responsibility for the company now.” 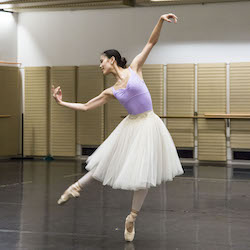 Your boyfriend is Chengwu Guo, who was also named a principal at the same age. What’s it like to be in a romantic relationship with someone with whom you also have a strong professional relationship?

“Well, he’s two years older than me and got into the company two years before, so he has always been ahead of me and I’ve always looked up to him and tried to follow him. He’s really positive and always gives me good feedback. When he got promoted to principal by 24 years old, I was like, ‘Wow that’s a really big achievement, I hope that I can be principal by 24!’ So I think I worked harder to make it to there. We are always supporting each other, and I think it’s great to have him as a ballet partner and a real-life partner.”

Many young dancers have looked up to you and will continue to do so over the course of your career. Who did you look up to as a dance student?

“I’ve always loved Svetlana Zakharova, she’s a Principal in the Bolshoi Ballet. I think the first time I watched her was in the Don Quixote pas de deux in Japan, where she was a guest artist in a gala. She’s just got the look of a ballerina, beautiful legs, beautiful face, but then her performance is just amazing. I just felt something in the audience, she inspired me and I’ve always looked up to her. Actually, when I was learning Giselle I watched her Giselle DVD a lot because it’s one of the best roles she’s ever done.

Lucinda Dunn too, looking at her in class and in rehearsal, she was a great role model to me and a superstar in this company. Now she’s gone, it’s a bit sad but we’ve still got Youtube and stuff in our generation [laughs]!”

I’ve got to say, I’m jealous of you for getting to see Svetlana Zakharova dancing live in Japan!

“Yeah, I was really lucky. I was only 13 and I remember I was with my friend — after the show I went down to the stage door because I wanted to get her autograph. I was waiting so long and finally she came out. I asked for her autograph in really bad broken English and she signed her autograph on my pointe shoes! I still have that pair. They’re not hung up any more because I’m a grown up but they were when I was a student. Now they’re just in a drawer but I still look at them now and think, this was the beginning of my ballet career. I still have a photo as well, and my face just looks so big next to hers — she’s got such a tiny face [laughs].” 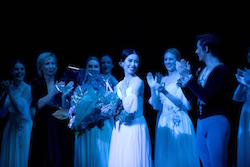 You mentioned that your English was not as polished when you were younger which must have been hard when you first arrived in Australia as a young dancer from Japan. What were some of the challenges you faced?

“Yes, I think in the beginning English was a problem – I didn’t have English at all. Ballet is all about body language though, you don’t need to speak up. That helped me a lot in class and with making friends.

But I also had a problem with my body. I felt like, well, as I said, I think dancers like Svetlana have beautiful long legs, tiny face, beautiful feet — and I always thought ballet was for European people or Russian, western people, not for Asians, because being Asian you get short arms, short legs, you know, and hips that won’t turn out. When I came to Australian I thought everyone had beautiful long legs and I didn’t want to look at myself in the mirror because I could tell how bad my body was!

Then I watch a documentary about Miyako Yoshida, it was about her life and time as a Principal dancer with the Royal Ballet and in it she said, ‘I have short legs, much shorter than the others, but I can move much faster than the others because of that.’ And I was so impressed — she took everything so positively. Instead of thinking ‘Oh I’ve got short legs, I’m not suited for ballet,’ she actually said that was the reason why she could move faster. After that I just starting thinking about everything more positively. My life changed. I just started enjoying ballet more, you know, and everything that happened to me I would think of in a positive way and I still do that now.”

Channelling Miyako Yoshida’s self-awareness, how do you think your own dance quality differs to that of other senior artists and principals in the company?

“My strength would be my technique, I’m quite reliable and I’m also an energetic dancer— I always get cast for jumping and turning roles because I’ve got the technique and energy to push, and my excitement comes out on stage, so roles that tend to suit me are ones like Kitri from Don Quixote and Gamzatti in La Bayadère.

But I don’t want to be just like that. I want to be able to dance all of the different roles and suit them to me. I was surprised I got cast for Giselle because I never thought I’d be casted for Giselle, you know, who is so innocent and pure, really soft. But having Fiona Tonkin coaching me in rehearsal, she helped me a lot because she was a beautiful Giselle and she was just really helpful and supportive. I guess through those rehearsals, my artistry got much, much better and you know, I was put on the principal rank.”

What advice would you pass on to younger dancers who aspire to be a principal one day like you?