One of the greatest dancers of our time retires this year, but our fascination with her will live on. Here are ten reasons why Sylvie Guillem rocks.

#1. Those legs. Those feet. That body. What else can you say?

#2. Her attitude. No, not the position – although that is also incredible – but her self-assured approach to life. As she said in an interview for The Spectator last year: “A lot of people will say to you that they can’t stand the way I dance, they hate me. Bon. You can’t please everybody.” It was this stubbornness that prompted Royal Ballet director Anthony Dowell to give her the nickname Mademoiselle Non.

#3. This breathtaking performance of William Forsythe’s In the Middle Somewhat Elevated.

#4. Her ability to transition from classical ballet to contemporary – and dominate at both. 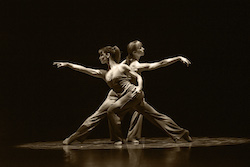 #5. Her collaborations, which have boosted other artists into their rightful place on the world stage, for example Russell Maliphant and Akram Khan, and the Ballet Boyz Michael Nunn and William Trevitt.

#6. How many times have you been told your career as a dancer will only last ten years? Behold, Mademoiselle Non, retiring from the stage at age 50.

#7. She’s tall – taller than your average ballerina. In a world often full of ‘no’ for girls over 5 foot 6, Sylvie has brought hope and inspiration, becoming a role model for the leggier dancer.

#9. This perfect performance as Cinderella in Rudolph Nureyev’s acclaimed production.

#10. Her presence, her passion, her raw energy, her intelligence, her daring. True, Guillem was blessed with an almost unbelievable physical facility for dance, but she wouldn’t have become the game-changer she is without also being a mesmerising performer, an absolute artist.

See Guillem in her last Australian performances this August at Sydney Opera House in her farewell tour called “Life in Progress”. For more information, visit sydneyoperahouse.com. Tickets are now available.

Watch this wonderful BBC documentary from two years ago about Sylvie Guillem.