With an alumni list including A-listers like Cate Blanchett, Mel Gibson and Baz Luhrmann, NIDA is recognised as Australia’s premier finishing school for actors, designers, directors, costume and prop makers, writers, staging and technical production hopefuls. As such, students at the National Institute of Dramatic Arts are well used to tales of stellar success; often as told by graduates returning to direct their campus productions.

However, 2015’s mid-year production run includes one notable non-NIDA ring in, Force Majeure’s outgoing Director Kate Champion. Known for her work as a dancer and choreographer, Champion’s career has seen her drawn increasingly towards works that are neither strictly dance, nor purely theatrical; and it is this blend of disciplines that she is bringing to the third years’ production of a newly devised work called Not Who I Was.

“I’m not doing a dance theatre piece though,” she declares upfront. “It’s more what you’d call a play with movement.”

In some ways, this is classic Champion. Ever the usurper of our expectations, she landed in the over-achieving world of NIDA with an agenda outside the textbook square. Normally, guest directors arrive on campus two months prior, work their charges intensively and then run into production. “But I said ‘well, that’s not how I work’. I normally develop work over a three year period, not full time obviously, so I suggested to NIDA that I try something similar; enter in with the students when they’re in first year, catch up in second and then make the work in third year.”

As it happens, this choice was a perfect fit for the work because Not Who I Was is a play about being a drama student. “What does it mean,” Champion asks, “to take on other people’s personalities while you’re still at a stage in life where you’re still developing your own personality? Y’know, what goes on in your head when you’re doing that at that age?”

From her position as an intermittently visiting outsider, Champion has been able to witness both the personal and professional development of the students she’s directing, as they have gone from “green” first years to more polished third years. Encapsulating the themes of the play, she observes, “By the end of [the course] you feel that you’re not the person you were when you first stepped into the place.” 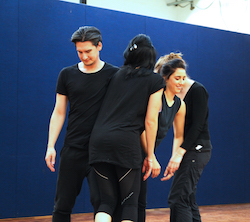 ‘Not Who I Was’ rehearsal. Photo courtesy of NIDA.

That said, the experience is richer than the simple development and staging of a work. Her role at NIDA is clearly more ‘big sister’ than it would otherwise be with Force Majeure or a cast in a wholly professional setting. At the core of this, of course, sits the age old mentor/protégé dynamic; a relationship as rewarding for the elder as it is for the younger.

“It’s a bit like a condensed 7 Up,” Champion quips, (referencing Michael Apted’s long running biopic series), before adding, “There’s a freedom with working with students because I guess they’re not as set. They haven’t been exposed to as much, so they really go with me and trust me. It’s not that other people don’t, but they’re really much more of an open canvas. It’s really energising actually.”

Given that Not Who I Was is very much a play, rather than a movement piece, the choice of Champion to direct may seem odd at first. That is, until she outlines her basic working principle. “I will never not work physically,” she says. “Even when I’ve been working on straight plays, I find that movement informs acting in an incredible way, even for them just to be physically aware, whether it’s the tiniest gesture or even the distance they stand from another person. These things tell so much about relationship. Even if the movement in this play is very simple, it’s still very loaded and there’s still a dramatic through line.”

Against the backdrop of the current vogue for narrative in dance this is a fascinating perspective. The dancer/actor crossover is a much discussed phenomenon, but with Not Who I Was the pollination process appears to be working in reverse.

“Coming from a dance background, what I look for is what happens when actors don’t have words to say,” Champion observes. “They tend to overact their physicality, so I like to get them to trust the truth of it and to not embellish it because, y’know, I’ve seen dancers sit still on chairs in a way that no actor can emulate.”

Perhaps the most poignant parallel at work with Not Who I Was is that both cast and director stand at crossroads in their working lives: students in their final year, Champion just weeks away from the official end of her role with Force Majeure. “Yes well, it gets drummed into them that ninety percent of actors don’t get paid work,” Champion wryly notes. “Having been freelance and worked on independent projects and waitressed and done every odd job, I can say to them, ‘sure, that’s out there but now just forget about it and get out there and do your thing’. It will be a hell of a lot more interesting than most other jobs out there.”

In a contemporary climate where funding is being squeezed and the mantras of economics and the myopic reductionism of marketing are dominant, it is a timely and inspiring call to action. Just what you might expect from a ‘champion’ of the creative life; pun very much intended.

Champion’s Not Who I Was will run from June 16-24 at NIDA Theatres. For information and tickets visit www.nida.edu.au/events/nida-presents/not-who-i-was.