Ballerina Lana Jones is about to dance her dream, as she prepares to take to the boards as Giselle in The Australian Ballet’s new production of the 174 year old classic.

There are a number of reasons why an aspiring ballerina would wish to dance the role Giselle. Not only is she the lead in one of classical ballet’s pinnacle pieces and an almost perfect broken hearted lover but she gets to see bad men lured to a forest and killed for their philandering transgressions.

First performed in Paris in 1841, Giselle is very much core in the ballet world; and indeed Maina Gielgud’s reworking for The Australian Ballet is itself considered something of a masterpiece. All of which sets the stage perfectly for the multi award winning Lana Jones to step into some of the most prized pointe shoes available to a dancer.

“It’s the perfect role for a ballerina,” Jones declares. “It’s got everything: story, acting, technical difficulty and that ethereal quality that just resonates with ballet. It’s a bit of a dream come true. One to tick off the list, that’s for sure.” 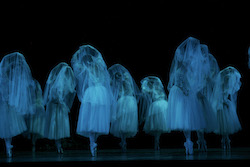 Artists of The Australian Ballet in ‘Giselle’ 2006. Photo by Danielle Lyon.

Originally from Coffs Harbour, Jones joined The Australian Ballet in 2002 and since then has danced plum roles in works by Graeme Murphy, Sir Kenneth Macmillan and George Balanchine; not to mention earlier iterations of Gielgud’s Giselle. As she recalls, “I’ve been in productions previously with the company and always looked up to Giselle and hoped to get there one day; and that day is here.”

Of course, much of the reason for Lana Jones’ obvious satisfaction here is that Giselle has maintained its status across 170 years. In part this is because of its universal theme; the dream of first love and its attendant nightmare. When you add in the ethereal second act, (the one in the forest with all the vengeful ghost women), the result is classic, nineteenth century romance. Dark, doomed and avowedly moral.

It’s also principally about character. “At this stage of my career that’s what I’m finding the most interesting,” Jones notes, “really delving into that youthful thing about falling in love. But she also has a heart condition, so that when she gets her heart broken she unfortunately dies. But then y’know, she comes back as a ghost.” 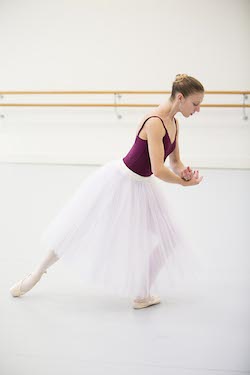 Luckily for the late Giselle’s errant lover Albrecht she is less sanguinary than the other forest dwelling jiltees and elects not to murder her ex but rather to dance all night in order to spare him. “Love overrides anything and when it’s that strong you would do anything for that person, so that’s the sacrifice she is willing to make for him, even though she’s been hurt by him,” Jones explains. “Sometimes I guess we can’t choose who we love.”

Aside from the prestige of the role and the passion of the piece, there is another dimension to Lana Jones’ satisfaction; namely, working directly with the choreographer, the company’s longtime former Artistic Director, Maina Gielgud. “She is absolutely a legend,” Jones confirms.

In the male dominated world of choreography, Gielgud’s interpretation of Giselle is perhaps more gender appropriate for one of ballet’s iconic heroines. “There’s a definite femininity about the way she works,” Jones agrees. ”Yet at the same time there’s this huge amount of inner strength and clarity. She knows exactly what she wants, right down to the fingernail or eyelash.”

Thus, with its blend of love, madness and precision, the Australian Ballet’s Giselle stands poised once more to invite you into the woods.

Giselle opens in Melbourne on March 13, before touring to Sydney, Canberra and Adelaide.  To see the full schedule of performances visit www.australianballet.com.au/giselle.