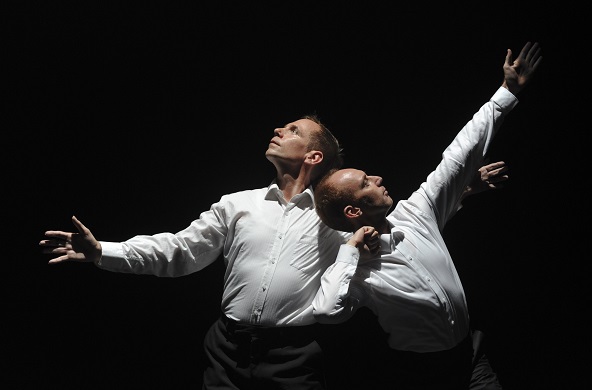 Are there songs one should definitely never dance to – in public or in private?

Songs Not To Dance To is an electric, striking and very moving collaboration between Sydney-based Martin del Amo and Lismore-based Phil Blackman, who attempt to answer this question in an engrossing performance that explores “notions of compatibility/incompatibility, connection/disconnection and congruity/incongruity.”

As we enter, the two are getting changed and ready for the show in what feels like a very old-fashioned theatrical dressing room atmosphere with the drinks trolley, etc. Both men are shortly immaculate and very impressive in their tres chic haute couture dark suits. At various times, the jacket, shirt and tie are removed depending on the requirements of the next dance.

Using ballet technique as its base, the performance is choreographed in del Amo’s distinctive style, using repetition, fluid sculptural movements, a long curved line, etc. There are allusions to his Little Black Dress suite, as well as the work of Merce Cunningham and Twlya Tharp. At certain points, the work is very tightly choreographed in unison, at others it is far freer.

The first dance section begins with the men side by side, facing the audience, observing us. To an orchestrated version of The Way Old Friends Do by ABBA, they repeat small movements, incorporating simple quarter turns. Facing each other, facing away from each other, facing each other to the back, to the front—we see all the various possible combinations. The ‘dance’ is quite minimalist; so little actually occurs that it becomes rather mesmerizing.

‘Songs Not To Dance To.’ Photo by Heidrun Lohr.

To songs by Whitney Houston or Christina Aguilera or stark clavichord pieces from Keith Jarrett’s Book of Ways, one or both men dance with an endearing, seemingly deliberate awkwardness. Wrists droop, toes are pointed inwards and in Del Amo style, hips are strangely placed and arms move in convulsive waves at times. Their movements are often slow and controlled — which has an impact when the music is Eminem’s Not Afraid. In Working Class Man, there are explosive powerful leaps for Del Amo, and his I Will Always Love You (yes, to Whitney) is an abstract reworking of the troubled Romantic Prince searching – extremely moving.

Stillness and silence are very important and used as a basis for reflection. Also, movement, whether balletic and refined or straining, awkward and unbeautiful, is used to celebrate the human body’s vibrancy. The two different types of dance alternate, but the men’s faces are strictly deadpan. Are they mocking and joking? At around the halfway point, orange segments are distributed to the audience.

The evening concludes with an impromptu dance by audience volunteers to an unknown tune that had been voted a song not to dance to by previous audience members. When the music began, they threw themselves into dancing a huge mix of styles, mostly street dance. Most had at least some contemporary dance training. Some stayed solo the whole time, others integrated with their fellow volunteers. They looked as if they were having a whale of a time and it was fun to watch.

Photo (top): Songs Not To Dance To. Photo by Heidrun Lohr.