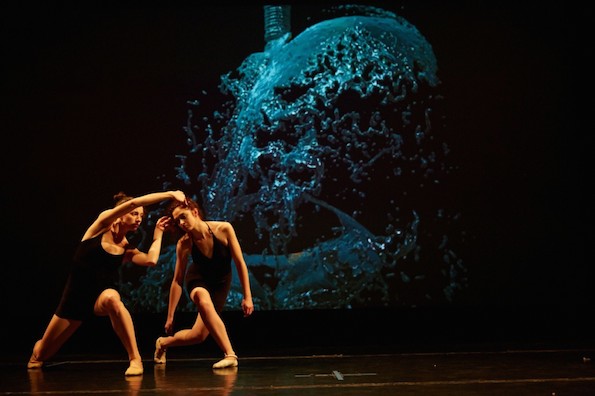 A giant, expressionless face fills the darkness, silvery water cascading down eye sockets and over lips. Inside – or is it underneath? – two dancers thread and weave, suspended in space as they tumble around each other.  Snatches of text float by, in front of you, below you…

In a dark room in the Eastern suburbs of Melbourne, strange things are happening. Things you have to see to believe, and even then, you’ll find them difficult to fathom.

“It’s something that I’m still finding hard to describe,” says Jonathan Homsey, Research Coordinator at Deakin Motion.Lab. “If you can coin a term for it, now’s your chance.”

I was visiting the Motion.Lab to have a sneak peek at rehearsals for The Crack Up, a new work choreographed by Kim Vincs that premiered at Malthouse Theatre on Oct 31.

“The Crack Up places dancers within spectacular projected 3D stereoscopic imagery, created using the latest industry visual effects techniques,” says Kim. “The audience wears 3D glasses, through which the projected imagery appears alternatively to envelop the dancers, co-existing with them in the performance volume, or to generate seemingly vast, cavernous landscapes for the dancers to inhabit.”

This project has been two years in the making; a collaboration between choreographer, dancers, composer and digital animators. It is an Australian Research Council Discovery project, exploring innovation in technology for performance. Since 2012, over five intensive sessions, it’s gone through what Kim calls “many morphs.”

The Crack Up is so much more than just a dance work. “I call it choose your own adventure,” says  Jonathan. “It asks the question: How immersive can immersive be?”

Despite employing the very latest technology, The Crack-up, Kim says, is “a fairly human piece, not about technology per se.” Based loosely on F. Scott Fitzgerald’s short story of the same name, it deals with the story of a person ‘coming apart at the seams’. “Part of the aesthetic is to emphasise the dancers’ fragility and humanity and vulnerability in relation to the imagery, rather than having them feel like they’re part of the same substance.”

The creators wanted to discover how using the available technology would impact on the form itself. “There are two key things we were interested in,” explains Kim. “One is stereoscopic imagery, how it changes how you see dance movement, when you’ve got control over the depth of the background.” The Motion.Lab team have been working on that idea over a number of projects, including Garry Stewart’s, Multiverse for Australian Dance Theatre. “We’re working with a completely different aesthetic and direction, but also working on that idea of ‘how you can shift what the stage space is and what scenography is with three dimensional imagery?’. How does that imagery makes you feel? Because it’s different to flat imagery.”

The other area of interest has been about how to provide information to an audience. “A lot of us watch TV with iPads on our laps; how can we integrate some of that technology into a performance, to feed in other ideas or information?”

And so, audience members of the The Crack-Up are invited to download a free app, which they then activate while in the theatre, playing a “parallel track” to the performance, the aim of this is to start to explore what such a concept means to attention, because it’s a “different kind of attention that’s called for,” says Kim. “We’re keen to see how that odd way of looking at imagery and content could work with the piece as part of the dramaturgy of it.”

One of the performers in The Crack-Up is Steph Hutchison, who has done a lot of work with the Lab. Working with the 3D technology, she explains, “shifts the way you would normally choose to make material for your own body. It asks a different question: If I move my body in this way how does it affect the image?”

Steph likens performing with the imagery to dancing in a contact improvisation system, where “you have to be open and receptive, responsible for yourself but also for the other performers – and the screen is another performer.” The iPads though, pose an interesting conundrum. “I’m not quite sure what it is to perform with the iPads yet… It’s trying not to compete with that, because I think there’s a real sense, as a performer, of ‘I’m working really hard out here and you’re on your iPad!’” laughs Steph.

If you’re anything like me and you’re beginning to have mild anxiety at the thought of having to watch two things at once, let’s relax. The app has been constructed so as not to be demanding of your attention. If you don’t use it at all, Kim assures me, the piece still works. “We hope that people will feel that they can use the devices or not, as they feel, which is how they are in real life.”

It can be difficult to imagine how an app might be integrated into a performance; it may just be something we have to experience to understand. But the specifics of the technology, Kim says, is not really what it’s all about. It’s more about how theatre functions under different parameters, using different approaches to attention.

The Merlyn Theatre is woefully empty the night I arrive to watch The Crack-Up. I take my seat, don my 3D glasses and boot up the app on the provided iPad. As I double tap the screen, the image begins to disintegrate, a theme that will be explored throughout the evening both on the device and in the performance space.

The live performance is a series of scenes involving dancers, animation, and even a bit of circus. The animation itself is at times mind-blowing. Sometimes it’s an ever-morphing shape suspended in mid-air; at other times it’s a dramatic landscape, enhanced further by the surging, haunting musical score.

The app provides poetic images and lines of text, presumably at least some of them lifted from F. Scott Fitzgerald’s story. Although it’s an interesting addition to the work, I prefer to watch the live action unfolding in front of me. That said, I like the way I only catch parts of phrases, which seem to permeate by subconscious and bring a greater depth of understanding to what I’m watching onstage.

The performers, of course, are flawless. On occasion I experience the guilt of forgetting to watch them, as I’m so enthralled by the hallucinatory images that are so hard not to get lost in. These are things I’ve never seen before, so how can I possibly look away? Most of the time though, there is an appropriate balance of focus, where the imagery and the dancers work harmoniously together.

As Kim Vincs had hoped, I truly do leave the theatre amazed at what I’ve just seen, and excited about the possibilities it opens up. I feel I’ve witnessed something truly magical tonight; it’s such a shame that, with all those empty seats in the house, so many people have missed out on experiencing it too.