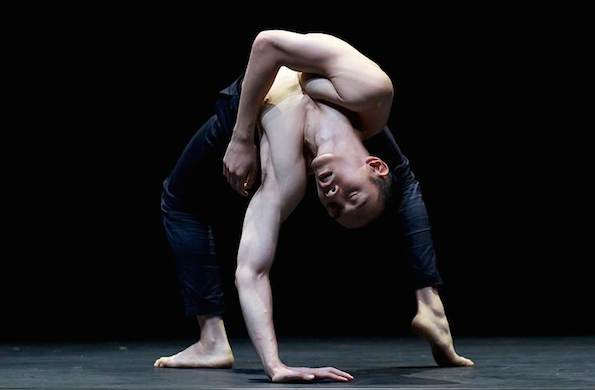 Plucked from third year at New Zealand School of Dance by Chunky Move’s Artistic Director Anouk van Dijk, James Vu Anh Pham is one of Australia’s most exciting young dancers. At just 22, he was last month the recipient of a Helpmann Award, for his performance in van Dijk’s 247 Days. Dance Informa caught up with the Perth-born dancer in between rehearsals for Chunky Move’s Melbourne Festival work, Complexity of Belonging.

You recently won a Helpmann award for your performance in 247 Days. How did it feel to win such a prestigious accolade?

“It was very surreal. You just kind of do your thing for awhile and then something like that comes along and it’s like ‘Oh, OK!’. It was very humbling and unexpected.”

You’re currently working on Complexity of Belonging with Chunky Move, to perform at this year’s Melbourne Festival. How would you describe what the work is about?

You’ve just started rehearsals – what sort of processes are you going through at the moment?

“We did a development for it a couple of months ago and we’re now back in the studio for the first time with everyone – cast and creatives. The development was a real time of working through the themes and ideas and getting to know each other and everyone’s way of working artistically.”

This is your 5th work with Chunky Move so far. Do any of them particularly stand out to you as favourites?

“I can’t say that one is a favourite, as they’re all so different, but there are two that stand out for different reasons. The first is An Act of Now, because it was my first professional engagement and that was really confronting because it was just so epic. The second is the solo I did for the SOLO Festival of Dance in Brisbane [gentle is the power, by Anouk van Dijk]. It was a real challenge artistically as I didn’t have other dancers to share the journey with. It was so physically and emotionally demanding for me, which lead to many moments of self doubt, ‘How am I going to do this?’, but then every time I made it through I felt a sense of accomplishment and empowerment, which is what the solo was about.”

Will you get a chance to see anything in the Melbourne Festival?

“I hope so! I think we have some time off, but it’s a long season and I don’t think other things are on for as long as Complexity of Belonging is. There’s a musician that I would love to see – Nils Frahm – so much of his music tugs at my heart strings, I just have to see him live! And of course the other dance works. I’ve got a lot of friends dancing in Am I by Shaun Parker, so I’d love to see that, and also Trisha Brown.”

You started off training in classical ballet – at what point in your training did you know that contemporary dance was for you?

“I trained at Graduate College of Dance, which is a classical institution, but when I went to New Zealand School of Dance I majored in contemporary, although we had to do ballet also. I always knew that contemporary was for me, but I knew I had to train hard in ballet to catch up on flexibility and technique. Like a lot of boys I started quite late, at age 15.”

Recently, you participated in the development of Triumphs and Other Alternatives, a new work by Ross McCormack and Muscle Mouth. How did you enjoy working with Ross?

“It was such a joy! It wasn’t like going to work at all. Ross is such a great guy, and it was such a fun and enlightening experience. He created a work on us at the New Zealand School of Dance in my second year and I’d always wanted to work with him again since then so it was such a blessing.”

“Definitely. I’d love to work with Sidi Larbi Cherkaoui’s dance company, Eastman. There’s a video of James O’Hara performing Faun that inspires a lot of male dancers, and that particularly stands out to me. But obviously, it’s early days so I’ll just take each day as it comes!”

You also teach at Chunky Move – do you teach Countertechnique?

“Yes, I’ve recently become certified as a counter-technique teacher, which involved a two-week intensive followed by practical and written assessments. I’ve just started out teaching it at Chunky Move and it’s now a process of discovering more about this technique.”

What advice can you give to young graduates or those studying dance?

“Whole-heartedly be yourself. Those moments when you look back on things you’ve done, said or believed in, and you cringe – that’s a good thing! That means you are growing and learning. Don’t be afraid to give it your all and to make mistakes. You’ll always fall forward! The idea of having to break into the industry can be so daunting and you might feel like you have this sense of anxiety and/or urgency because as a young dancer you’re so hungry to get in there and fuel your passion for your artform. Just acknowledge that absolutely everything doesn’t have to happen NOW, and that when things don’t work out, it does not mean you’re unsuccessful. There is time since it’s so early in your journey. Lap up every single moment – up or down, good or bad!

Complexity of Belonging plays at the Sumner at the Southbank Theatre, from October 6 to 25. Bookings can be made at www.melbournefestival.com.au/complexity-of-belonging/#.VB9wF-fvqC8.

Photo (top): James Vu Anh Pham dancing in gentle is the power at the SOLO Festival of Dance in Brisbane in May 2014. Photo by Fiona Cullen.