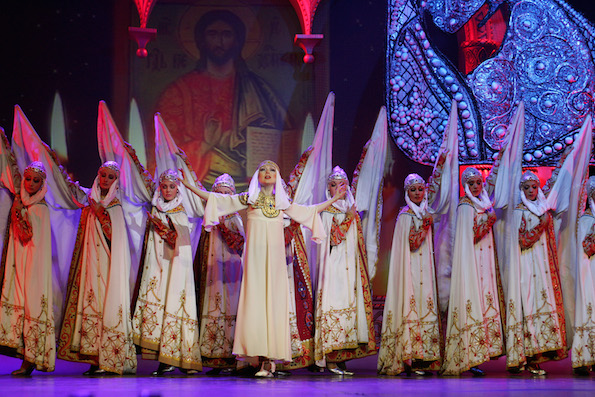 With Russia once more in the West’s bad books, spectacular touring shows Kostroma have more than the usual production and logistic problems to deal with.

Following the collapse of the Soviet Union in 1991, Russia has endeavoured to reassert a sense of its own identity, both within and beyond its enormous territory; and as they once did under the Tsarist and Bolshevik regimes, folk costume and dance have formed a strong part of that push. Indeed, for many of us outside Holy Rus, dance (and ballet in particular), are all we know of Russian culture; with the possible exception of vodka.

However, 2014 has upturned Russia’s steady reintroduction to the world stage. Events in Crimea and the east of Ukraine, and an outbreak of officially sanctioned homophobia, have the wider world looking at Moscow askance once more. 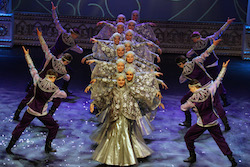 In this context, globe-trotting dance companies like the Russian National Dance Company, who arrive in Australia this month to tour their spectacular stage show, Kostroma, have had to deal with more than the usual theatrical headaches.

Indeed, according to company director and Kostroma’s tour producer Maria Veshkina, “It’s all very frustrating because the idea of the show isn’t about showing how mighty Russia is, it’s about the beauty of the people.”

Speaking from her office in downtown Moscow, Veshkina is adamant that her company and their epic show represent the real Russia. “We’re a multi-national country and we are not what many people think. We’re just trying to say that, apart from everything else, we’re just people. We just want to bring kindness and peace into the world and we’re trying to get out of all that politics; but in our times that is very difficult.”

For all of the contemporary kafuffle though, Kostroma is more rooted in Russian history than in geo-political muscle flexing. In fact, both the show and the company hail from the small city of Kostroma, which in turn occupies a very special place in Russian folklore; for it was from this town on the banks of the Volga and Kostroma rivers that Mikhail Romanov was handed the Russian throne in 1612, thus initiating three centuries of dynastic rule that ended with the twin revolutions of 1917. 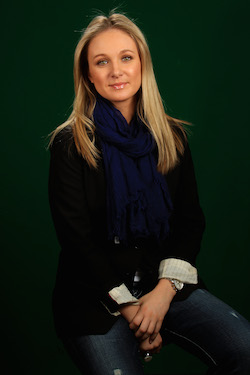 It is no surprise therefore that Veshkina and company are all about celebrating the vast Russian mosaic. “This is the Russia that a lot of people don’t know,” she declares. “Mostly people have heard something, they have stereotypes about Russia; but this is the real true Russia as it is, and we try to portray that in our show. Y’know, we bring a little bit of Russian soul to the audiences.”

At its core, Kostroma is big on spectacle. As one of the most expensive stage productions in Russian history, it comes complete with more than forty dancers, huge video and lighting rigs, ten tonnes of freight and a whopping six hundred costumes. As Veshkina explains, the company opted to go ‘grand scale’ on Kostroma in order to take it “beyond the narrow audience for Russian dance.”

The costume department alone is as vast as Mother Russia itself. “We have seventeen costume changes,” Maria Veshkina says. “Our dancers sometimes change four times in one dance.”

In keeping with the spirit of the Russian National Dance Company, the costumes are the focus of much of the ‘authenticity’ that underscores Kostroma. “All the costumes are hand-made and all of them are very accurate in terms of following the traditional ways of making and wearing them,” Veshkina elaborates. “Each one is an original garment. It’s very difficult to take care of those costumes. You could never replace or duplicate them.”

As much as it’s possible to encapsulate something as abstract and fluid as a ‘nation’ or a ‘people’ in a single two hour show, Kostroma attempts it. “The idea of the show is to guide the audience through history,” Veshkina reveals. “It gives you the atmosphere rather than dates and exact facts and it tells you what mattered to the people at certain points in Russian history.” 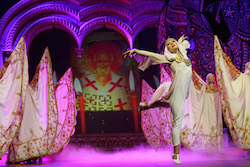 Even more epic than its history is the sheer size of the country. By far the biggest nation on earth, Russia covers one eighth of world’s habitable land mass and no less than nine time zones. For a show like Kostroma this represents both a curatorial and creative challenge. “We meet people from all over Russia and we try to give the audience as true a vision of that culture as possible,” Maria Veshkina states. “But this is nowadays Russia we’re talking about, not Russia from Soviet Union. It’s not about Belarus or Ukraine, it’s all about people living in our territory today and it gives you a feeling for how multi-national Russia is.”

For Kostroma size really does matter. Even after twenty years on the road (including the past ten sellout summer seasons in Moscow), the show is always looking to be bigger, better and bolder. “Like pearls on a necklace,” as Veshkina likes to say.

All of which makes for a fairly punishing schedule. “Sometimes we change entire costumes in under two minutes; so yes, it does take a lot of energy,” Veshkina concludes with a smile in her voice. “Y’know, you could come and watch a complete backstage show if you wanted to. Quite an interesting one as well!”