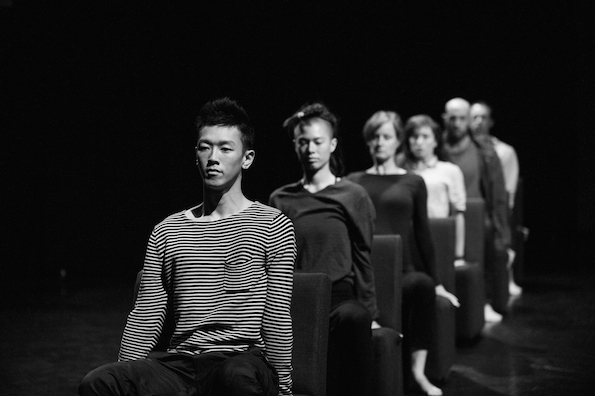 A Dutch choreographer, a German writer, the English language, five dancers, four actors and one international arts festival. Is collaboration the new community?

“The human body is the society,” says Anouk van Dijk.

The Dutch born, now Melbourne resident Artistic Director of Chunky Move sits in a small room in the busy hive that is the company’s HQ. It is just a few short weeks out from the world premiere of Complexity Of Belonging, and she is holding forth about the spine of ideas around which the work is currently coalescing.

“It is the vessel that we carry with us,” she elaborates. “In the end, all of this stuff [waves hands] is sensory. It’s all about how I feel and it’s all connected directly to our bodies. Our bodies are the core of our belonging.”

While some might find this a tad esoteric it all makes sense within the context of the project that van Dijk is bringing to life in collaboration with German writer Falk Richter and nine local performers. Complexity Of Belonging, which will debut at the Melbourne Festival this month, is about how it is we find and create a sense of belonging in an increasingly digital and disjointed world.

Indeed, the much discussed atomisation of society and the attendant collapse of community have inspired and informed the work; both personally and philosophically. “A lot of people I speak to in Australia say, ‘yeah, that’s my life’,” van Dijk explains. “Skype, airports, long distance relationships, working in one state but having a family in another, being a weekend parent; y’know, it’s not so exceptional anymore.”

‘Complexity of Belonging’ in rehearsal. Photo courtesy of Chunky Move.

For Complexity’s co-creators, Richter and van Dijk, the reality of this tech driven lifestyle is very close to home. As the latter notes, although she is from Amsterdam, she has an uncle in Japan, a brother moving to Singapore and new life here in Australia. “So my tribe is tiny and living all over the world,” she says.

The same, she reveals, is true for Berlin based Richter; a busy, successful writer/director travelling and working wherever the commissions take him. “Falk and I always reflect upon our personal experiences when we’re devising a new work,” van Dijk points out, “and so for me, having recently moved to the other side of the world, the questions are where do I belong, what happens to the people I belong to who are living far away from me now, and how does it affect my work?”

However, far from doom-mongering, Anouk van Dijk suggests these newly emerging forms of society represent “an adventure” of sorts. “How do we form societies now?” she asks. “But also, how do we form relationships and what forms of relationships are there? Different partners, same sex, different religions? What are the implications of that and how do we build families from that?”

It’s rich and fascinating philosophical territory; exactly what we might expect from one of Australia’s best loved contemporary dance companies and two of Europe’s most daring and engaging creatives. So how can they make it work on stage?

Although Complexity will be van Dijk and Richter’s fifth collaboration it will be their first in English and the first since van Dijk’s move down under in 2012. As she notes, “Because Falk is a writer and I’m really interested in the emotional impact of words physically we work really well together. We’re interested in very similar topics and also in how we can expose ourselves through our work but still feel safe doing so.”

That personal/emotional element of creation also extends to the five dancers and four actors who will embody the work this month. “There’s a lot of input from the performers; and we as an audience don’t really know if that is the real story of that person or just the written form of it,” van Dijk teases. “Y’know, there’s the white male, the mixed blood first generation person who identifies himself as Australian but is also considered Asian, the strict Catholic background with aboriginal roots, the person who lives overseas and so on. But what is real? And what is created?”

Stephen Phillips and Lauren Langlois in rehearsal for ‘Complexity of Belonging.’ Photo courtesy of Chunky Move.

Given all this talk of tech centric, geographically diverse families and societies, it is perhaps entirely appropriate that Anouk van Dijk likes to video all the rehearsals and give her performers the “best bits” on USB. It is a perfectly digital response to the challenges of rehearsal and performance and, as she says, “now that we’re in the final rehearsal phase all these atoms are coming together.”

And of course, it is togetherness that lies at the heart of Complexity Of Belonging. For all the triumphal bravado of Western liberal individualism we remain creatures of the herd. “Falk and I feel it’s something really positive that we have all these options and ways of discovering new forms of being together,” van Dijk declares. “We have to re-calibrate our belonging; and we see that as something exciting and not as something depressing and suffocating because, in the end, it’s about ‘how can I be close to you and how can we connect?’.”

In fact, if there is anything that the multi-ethnic, multi-time zone, cross-discipline collaboration of Complexity proves it is that we still do our best work together.

Complexity of Belonging plays at the Sumner at the Southbank Theatre, from October 6 to 25. Bookings can be made at www.melbournefestival.com.au/complexity-of-belonging/#.VB9wF-fvqC8.