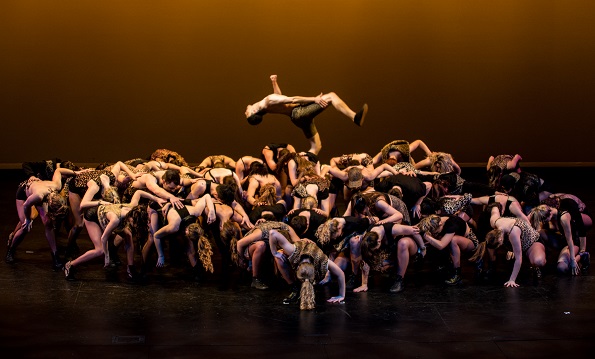 By Kym King of Dance Informa.

Despite unfortunate issues with vocalist sound in the first couple of numbers, Spectrum Dance’s Midyear Showcase at the Karralyka Theatre delivered some pleasant surprises. The program provided an energetic and enthusiastic platform for Spectrum’s Certificate IV and Diploma students as well as the creative talents of faculty and students.

Good programming ensured that there was never a dull moment. While the aim was clearly to showcase the range of the performers, well planned transitions between numbers prevented the show from having a ‘bits and pieces’ feel. This was a considerable achievement given the broad range of dance styles on offer, including ballet, jazz, tap, lyrical, contemporary and hip-hop, as well as acting and singing.

For me what was impressive about this performance was that each of these students was on stage a lot of the time. This supports the statement on Spectrum Dance’s website that they place ‘huge importance on the success of each and every one of their students.’ With so many performers on stage it was essential for ensemble work to be creatively and skilfully choreographed and in this Spectrum are masters. While there were definitely a few who had moments of individual glory, as an audience member I felt that these students were really given the opportunity to fine tune their performance skills.

Highlights in the first act included Social Media performed well by Sophie Stewart with text focusing on the isolation we experience with the rise of social media. Staging of this piece was simple and mesmerising. Stewart stood in a spotlight flanked by performers seated on the floor in gold draping headdresses and lit only by their mobile phones. 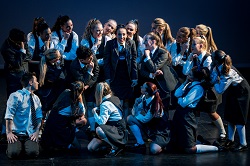 Also notable was some beautiful contemporary (lyrical) choreography by Kim Adam’s Fast Car requiring a more natural quality from the performers. Crazy was danced by Kearna Philpott with vocals by Tessa Wilson. Philpott is an exquisite contemporary/lyrical mover and a joy to watch although at times her slightly overdramatic facial expressions were a distraction.

Opening the second act was Be Italian, choreographed by Michael Ralph for the full company. For me this really delivered the ‘wow’ factor for the entire show with some fantastic ensemble work with tambourines, great costuming, high energy and lots of attitude. This piece was tighter and more professional than anything previous, and from here on the performers seemed to find their stride. Worth mentioning is the comedy sketch I’ve got a Secret performed with great timing and irreverence by Brielle White, Tessa Wilson, and the rich and confident tones of vocalist and guitarist Tegan Cutting in Stand By Me.

As an ensemble the girls were strong performers but the boys did not disappoint, and demonstrated good solid dance technique and some great personalities. In particular, long limbed Tyrone Anthony Lang performed his own solo with wonderful control and grace and Mathew Mitchell proved to be a good all-rounder, performing with commitment to everything he did.

I was thoroughly entertained by this program and in the second half forgot that I was watching students and not professionals. Fingers crossed I’ll see some of these students on stage in professional productions in the future. But in the meantime, quite clearly they’re having the time of their lives.