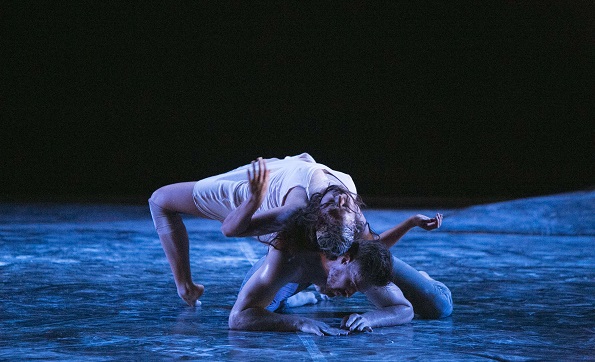 This year is the 25th anniversary of Bangarra Dance Theatre. In recognition of this achievement Stephen Page has created the companies first full length work telling a local Sydney story – Patyegarang. At the opening night Stephen Page welcomed Milly Ingram to the stage to officially welcome the audience to the Gadigal land of the Eora. Such a fitting welcome, as tonight’s performance tells the story of the Eora people during the time of the first English settlers, which took place just metres from where we sit in the Opera House.

The work is named after Patyegarang, a woman of the Eora nation. She initiated a cultural exchange between the traditions and language of her people, the Dharug, and the colonial astronomer and polymath Lieutenant William Dawes. Dawes kept a faithful record of these encounters in his diaries, which were rediscovered in 1972 and then turned into an historical novel by Kate Grenville – The Lieutenant. The Eora people were considered intense with enduring courage as they took in an English settler to teach him their ways. The story is a beautiful, optimistic but brief first example of reconciliation.

The piece begins with a traditional depiction of everyday life on the land. Men enter with spears onto a sparse and simple set, created by long time collaborator designer Jacob Nash, depicting the barrenness of the land. Nash has created a simple but rich and textured landscape which pulsates with the colours of the Australian red dessert thanks to the lighting design of Nick Schlieper. The music completes the experience with David Page’s melodic, computerised fusion of indigenous and traditional instruments beginning with a provoking aboriginal chant as the dancers enter. As the work progresses the chanting shifts to a more atmospheric earth song of the bush.

Stephen Page has created mesmerizing choreography that is a perfect fusion of traditional Aboriginal movement and modern contemporary dance. Thus helping the audience connect to the story whilst providing a modern and accessible pastiche. Page uses his well-honed skills to create ingenious choreography representing everyday movement in a contemporary style. The women sitting, dancing a repeated motif of chopping, or gathering, or brushing, was a stunning insight, through movement of the daily activities of the tribe. Page has created a masterful work that honours his Aboriginal heritage, and the movement associated, whilst still making a work that is modern, relevant and captivating. 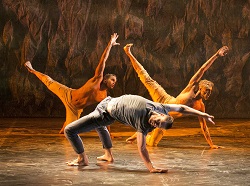 The characters are defined simply through the use of different costumes and looks provided by constant collaborator, costume designer Jennifer Irwin. Her masterful looks are textured and contrasting with a stand-out piece worn by Elma Kris, as an elder of the Dharug, dressed in a fabulous sequined shift dress. The Aboriginal people are in traditional clothes accented with face and body paint whilst the Englishman, Dawes, wears modern European clothing. Although the choreography is all from the vocabulary of Page, it is amazing how different it looks when performed in the varying costumes with different intentions, nationality and characters.

Bangarra invited Thomas Greenfield to dance the role of Dawes, and he is the only non-indigenous performer on stage. He has a powerful and dynamic presence born out of his extensive background in contemporary dance and physical theatre. Interestingly though the movement that he performs as a European is the same distinctive style of the other Bangarra dancers. Thankfully the delineation is clear through Irwin’s costumes.

Patyegarang is played by Jasmin Sheppard who has worked with Bangarra Dance Theatre since 2007. On stage Sheppard has a graceful and compassionate presence, truly embodying this unique and historically relevant character. The mesmerising duets between these two are the highlights of the evening.

Elma Kris, who not only stood out for her wonderful dress, also stood out due to her incredibly wise and mature presence on stage. Waangenga Blanco was another scene stealer. Kris and Blanco portrayed two senior members of the tribe and each time they were on stage they were compelling, enthralling and masterful.

This piece is more than just dance, it is dance based physical theatre, with a story that is clear and vibrant in its telling. It is a story about a desire to understand rather than destroy. Demonstrating that learning each other’s ways is a noble cause despite being in the middle of fighting and submission, and one that sheds a light of hope for the future.

The moment that embodies everything this piece stands for occurs when a blackened girl and white mud-caked boy are carried to centre stage to stand on boxes. Patyegarang and Dawes wash them down, removing the colour of their skin, to leave only the neutral colour of basic humanity. If it were only that simple to wash away prejudice!