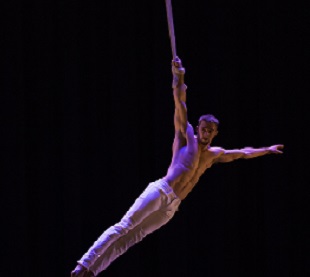 It’s that time of year again when mid-year showcases are happening all around the country, among them that of the National Institute of Circus Arts (NICA). This year there were technically two showcases or at least two alternating shows with the stars of one show performing in the ensemble for the other one. This format provided students who might otherwise have remained hidden in the ensemble a more substantial opportunity to showcase their talents. If in consequence of this the performances in Show Blanc of Rouge et Blanc were a little less even than they might have been, they were still, nonetheless, impressive.

Ashleigh Tomasini’s turn as a platinum blonde bombshell on the German Wheel was funny, vital and impressive; Lucas Simonds, meanwhile, displayed remarkable strength performing on aerial straps, an apparatus which looks like two ribbons suspended from the ceiling and wrapped around the performer’s hands and wrists and not dissimilar from men’s rings in artistic gymnastics.

It was Yonnas Gebremedhin’s nail-biting unicycle act, however, which proved the show’s highlight. His obvious focus and skill made his performance more of a joyous adrenaline rush rather than truly concerning, even while his tricks and leaps across differently-sized unicycles could not help but leave the audience gasping. Gebremedhin’s juggling skills were equally impressive, and he looks set for a bright future in circus arts. 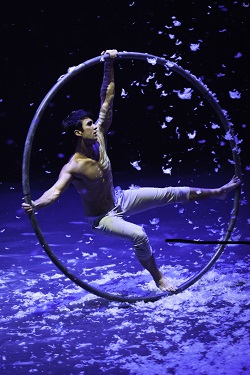 Conceptually and choreographically, the show was a little weak; the circus acts were not particularly cabaret or anything else in particular. Doing much to compensate for this was Aurora Kurth, masterful in her role as our sexy “French” (deliberately dodgy accent aside) Mistress of Ceremonies. Her vocal talent, perfectly-timed wit and spontaneity lent the show an energy it would have lacked otherwise. A quip about “three scared little faces” did much to relax the crowd too after a rather scary moment midway through the show when a three-person shoulder stand came tumbling down during an ensemble scene.

Viewed as standalone acts, the routines fare better, though there remained a number of distracting elements. Mia Albers’ tissu routine, for instance, would have been much better off without the comic attempt at optical illusion at the start. What was meant to be an impressive freeze-frame style opening, in which Albers disappears in the darkness of an unlit stage only to re-appear dramatically in the middle of various spotlights, was somewhat let down by the highly audible sound of scuffling and running between each frame.

Though at times a little thin on the ground artistically, NICA’s Show Blanc is a fun night out and a wonderful celebration of the hard work the young students have put in to get to this stage in their budding careers. If the ensemble members prove as talented as their peers, as I suspect they will, Show Rouge audience members will have a great time in store for them.