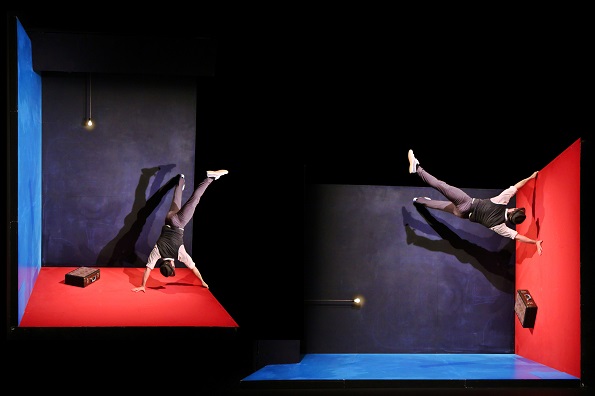 Leo, the simplistic yet intelligent one-man physical theatre comedy show from Montreal, originally crafted by Tobias Wegner and performed by William Bonnet, brought the house down laughing for both young and old on Sunday, 6th July at the matinee performance at Sydney Opera house.

Situated in an exposed two tone blue and solid red three wall room, located stage right, Leo, the Charlie Chaplin like character of the modern circus world, went about his day in a horizontal manner whilst gravitating to the floor.

To the left of stage, was a live visual projection of the same room, yet vertically orientated to create the illusion of dual vision. This visual trickery resulted in comedic moments of ingenious flare, where Leo would suddenly have the laws of gravity working in his favour, where witty and intelligent creativity would defy basic perceptions.

Amused and perplexed, Leo would find himself climbing up walls, walking upside down and coexisting in a world of static magnetism. He explored witty Spiderman like skills by twisting and twirling, climbing and sliding, exploring every corner and surface available to him.

Gradually building from one concept to the next, mixing music, cirque art, comedic gestures and projected video animations, his universe was created by his very own imagination leaving his world unparalleled and upside down, causing him to be entangled in personal conflict prior to finding an unsuspecting escape.

This incredible venture of Leo’s has resulted in numerous awards, dazzling audiences across the world, from the Edinburgh Fringe Festival, to Russia, Korea, China and New York.

Produced by Y2D Productions in association with Chamaleon Productions, Directed by Daniel Brière, this must see show for all ages was quite the visual tease. It was certainly executed with suave strength and ease.