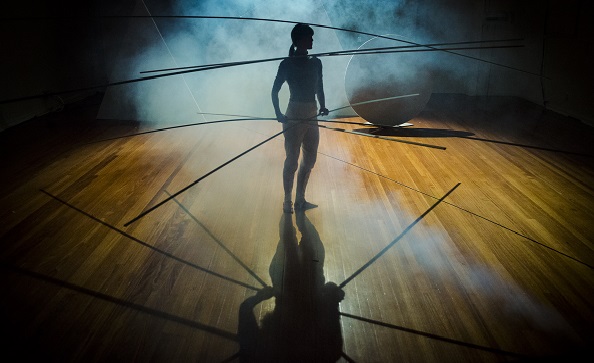 Sarah Aiken, James Batchelor, Atlanta Eke and Shaun Gladwell were the four contemporary dance artists selected for Programme Two of the inaugural Keir Choregraphic Awards semi-final. All four shared the same brief — to each create a 20-minute dance piece realising the topic of their initial submission to the panel.

Sarah Aiken’s Three Short Dances continued her fascination with the fine line between the poignant and the absurd. All three motifs were visually striking and minimal; the first saw three cream-coloured geometric shapes glide slowly across the floor, like clouds across a darkened sky. When Sarah finally emerged, draped in beautifully-dyed wings, the self-styled “cocoon” was both poetic and comic; that was likely Sarah’s intention, for in the final stage of her piece we beheld Sarah carefully placing various solid planks across her body and spinning in an impressive feat of balance — the action would have been hypnotic but for the less-than-musical accompaniment that was the wailing of fellow artist Daniel, who also insisted on audience participation. The whole situation was absurd indeed. Absurd but effective.

James Batchelor’s Escape to the Infinite, meanwhile, offered us a study of the construction worker — of the contradiction between man-made order and the natural physicality inherent in its achievement. Based on Batchelor’s film studies of construction sites in Melbourne, Sydney and Bangkok, the rhythms of sixty-four cinder blocks being dropped, dragged, arranged and re-arranged provided both the soundscape and sense of order underpinning the piece. While highly suited to treatment within contemporary dance context, the piece was unnecessarily slowed by the ambitious 64-block live construction the dancers carried out in tandem with the movement study; the piece would have been tighter, more powerful and less drawn out had the construction been carried out with fewer blocks.

The third piece of the evening, Body of Work by Atlanta Eke, promised to explore “the paradox of how the ‘present’ is a point of tradition from the past to the future as well as a permanent rewriting of both past and future.” Body of Work proved equal parts intimate and bizarre, seeing Eke don a futuristic helmet to step down to the stage like an alien stepping down to earth from a spaceship. It was, however, an intellectual piece of substance and imagination which provided a unique vehicle for some very interesting ideas. Eke’s piece made effective use of technology to capture movements within her performance on to which she artfully mapped new movement sequences, highlighting through this process the tension between performance and the documentation of performance.

The final piece of the night was Shaun Gladwell’s Dead Flag Blues which analysed the gestures of soldiers operating under pressure within the field and in training. Although the subject of this piece too seemed highly promising, the ideas were not clearly set up or imaginatively treated, and the piece proved disappointingly monotonous. Although Gladwell made much use of props, their use seemed superfluous; a heap of grass, we discovered, was actually a dancer in camouflage, but the costume served no other purpose than to be immediately discarded.

It will be interesting to see which two of these four pieces will move on to the finals in Sydney to compete for the grand prize of $30,000 and a People’s Choice award of $10,000. My choices would be Sarah Aiken and Atlanta Eke for their ability to effectively realise their concepts at the emotional and intellectual level, with Eke’s piece the standout of the night. No doubt it will be a close competition, however, for the lucky eight finalists.

Post Script: Congratulations to Atlanta Eke who was recently announced the inaugural winner of the Keir Choreographic Award in Sydney.