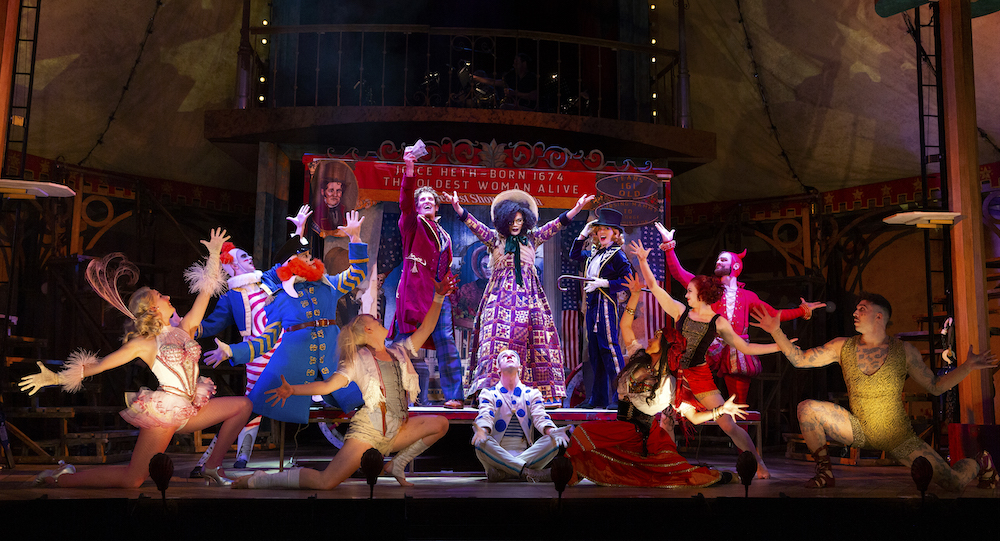 Barnum: The Circus Musical is a biographical musical of impresario P.T. Barnum. The original Barnum musical opened on Broadway in 1980, with book by Mark Bramble, music by Cy Coleman and the lyrics by Michael Stewart. The man P.T. Barnum, who is the archetypal American trickster, lived from 1810 – 1890, was infamous for being a purveyor of dubious freaks in sideshows and is credited with the phrase ‘There’s a sucker born every minute.’ He went on to become a politician and the founder of the famous Barnum and Bailey Circus.

Riding on the coattails on the recent success of the film The Greatest Showman on Earth, this latest Australian production of Barnum: The Circus Musical is directed by Tyran Parke together with choreographer Kelly Aykers. The production is unusual in that it is a collaboration with National Institute of Circus Arts (NICA). The circus is brilliantly integrated into the musical theatre form and vividly imagined and directed by Zebastian Hunter.

This Australian season stars Todd McKenney as Barnum. He is a seasoned performer, and we feel in confident hands with him leading us. Rachel Beck delivers a solid performance as the long-suffering wife. Kirby Burgess is compelling as she mutates through multiple characters.

Although they serve the production largely as a supporting ensemble, it is the circus kids from NICA who, with sparkling effervescence and precision, deliver the freshest elements in this production. They are well versed in the musical theatre form, and deliver the dance forms easily. Sure, they may not have the nuance, range and ease of McKenney, they may not have the vocal elegance of Beck, but as clowns they delight, and as acrobats they enthral, and they are alive with love for the work.

It is unusual to see circus integrated into the musical theatre, and this production is worth seeing for that reason. The NICA kids will not disappoint.