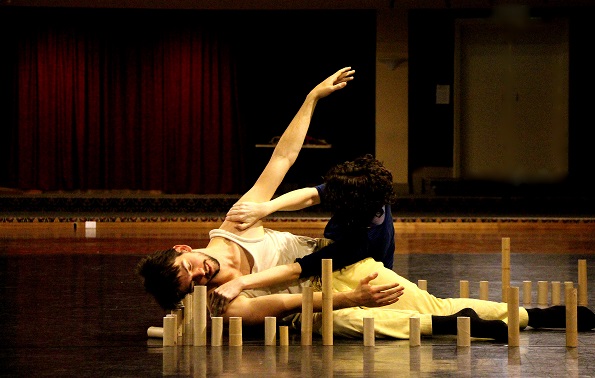 Following the success of Pomona Road and Involuntary, Katrina Lazaroff of OnePoint618 Dance Theatre is now well into the development of Wasted, a meditation in movement and sound upon self-criticism, discarded dreams, and the spectre of failed potential.

I spoke to Katrina about the evolution of Wasted, including the universality of its theme, the integration of words and music, and its ongoing development through a Pozible campaign.

When asked about the project’s genesis, Katrina revealed that Wasted began as a proposal for AC Arts. She had a vision of one dancer and a cello player, trying to be better, faster, and never quite getting there. “Later, I started to think about the dancer and the human being.  Often in life people don’t feel they reach their potential; we judge ourselves or others judge us. It’s like that monkey on the shoulder, the voice in the head that creates self-doubt,” she revealed.

This culminated in Life as a Toilet, what Katrina describes as a meditation upon “all our wasted ideals, visions and dreams going down the toilet, along with the waste we create and how it impacts on the world.” Eventually, these ideas proved catalysts for the development of Wasted, a work which proved challenging as Katrina played with the notion of representing interior states of mind.

“There are literal ways to get into it,” she maintains. “For example, showing a monkey on your shoulder and going with the symbolism of that.  But when I’m trying to tell a story to people who aren’t dancers as well, I try to integrate concepts we can all identify with.” Katrina’s experiences gathering sources such as documentary footage of alcoholics attending AA meetings sharpened her focus. “I realised this is a massive social issue about people escaping themselves. It tends to be accepted, and so it becomes a deep-seated problem.”

The sociological ramifications of addiction have provided Katrina with a way forward in Wasted. “From there I can now go into territory that is a bit deeper, like needing someone else in your world to trust, which leads into concepts like co-dependency…This can also be a socially accepted thing, but we can get into so many ruts in that relationship.”

A key element for Katrina is translation of these concepts into movement that ‘sells’ a relatable idea. “Once I’ve got those ‘linchpin’ ideas really clear, I feel free to go ahead with them.  I still work abstract moves into it, but I have universal themes that ‘read’ clearly with the audience.”

“It’s a collaborative process of finding text.  This process can be quick or it can be long and tedious, as I’m not a writer as such.  One element that happened this way in the last development is the ‘self help coach.’  I think this will become a key theme of the work.”

I was curious about the implied humour of the ‘life coach’ figure, and Katrina sees it as an opportunity to exploit dramatically.

“This irony is important to my work – trying to touch something deep with something light.  A recent development you can see on my site (www.onepoint618.com.au) was looking at ‘self help’ being so encouraging, and then turning against itself; criticising and pulling someone down by getting too self-involved and absorbed. This often happens with our leaders and coaches…they can end up destroying what they create.”

So is this ‘destructive relationship’ idea integral to Wasted? “It’s linked into that co-dependence thing,” says Katrina, “where two people don’t allow each other to grow anymore because they are caught in a holding pattern…It’s a very personal part of the work for me. You, with the best of intentions, can still be holding someone back and they can hold you back. I’ve experienced this quite deeply and it’s become a new driving force for my work.  I always try to bring part of my life to what I’m making, and hopefully in doing that, everyone else can identify.”

And what about the people onstage Katrina is assembling to portray these relationships? Did she craft any pieces with particular performers in mind?

“Usually casting evolves as I go,” she says. “This is because it’s a question of when funding comes or doesn’t come, and who keeps showing interest; I may be interested in someone but they may not be available.  Casting is complicated. Sometimes it’s clear a part goes with a particular person and we develop it from there and work out the nuances with that person.  People are given particular roles and characters towards the end of the main structuring of the work.”

The primary support for Wasted is being generated via a Pozible campaign. “This came about,” says Katrina, “because I didn’t get funding from the Australia Council.  The concept of a Pozible campaign is that you already have a project happening and support behind it, but you need just that little extra support to actually make it happen.  Unfortunately, I desperately need it now, because all my other projects are rolling through the year and I’m on a bit of an edge. The $8000 won’t cover everything, but it will certainly enable it to happen.”

I finished up by asking Katrina if Wasted carries a personal focus for her, and if it also deals with a theme that will be embraced widely.

“In regards to the message of the work overall,” she says, “we can all get bogged down in what society or the media tells us in this busy, technology-driven world, or we can focus on our individuality; our personal and unique reasons for being alive.  We can notice and reflect on our lives and not just get dragged along, following other people’s dreams or being someone we are not just to make someone else – parents, teachers, partners – happy.  There are a lot of unhappy people because of that; a lot of war and hardship because people somehow think that following their own truth is self-indulgent.  We are taught that to do so is wrong.  But perhaps if we were taught it’s okay, then we’d have a better world.”

To help fund Wasted pledge your support at www.pozible.com/project/180416. Then catch the world premiere of the work in 2015.