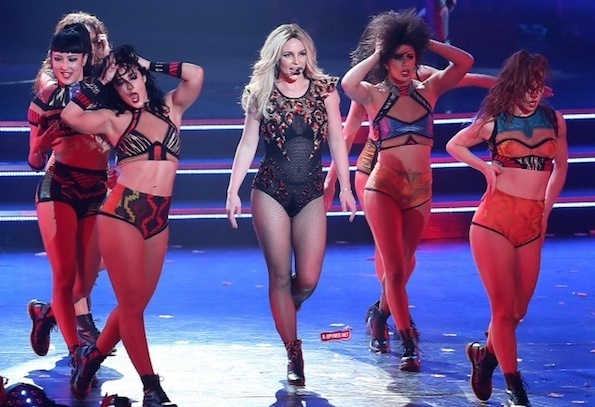 Dance Informa recently got the chance to catch up with the uber talented Morgan Choice, who is currently performing in one of the hottest dance gigs, Britney Spears’ Pieces of Me show in Las Vegas.

Choice has also had some wonderful experiences leading up to this opportunity. Here, she shares what her life is like as a professional dancer thus far.

To introduce you to our readers, can you tell us a little bit about your initial training?

“I started dancing when I was around four years old at Brent Street Studios with the usual – tap, jazz, ballet and contemporary, but I don’t remember there being hip-hop back then. I did all these styles until I was about 13, and then I started really heavily going into contemporary. That was something I really wanted to do initially. My dad (Leonard Choice) was a contemporary dancer so I wanted to follow in his footsteps.”

Was he in a company?

“Yes, he was in Alvin Ailey American Dance Theater, ADT [Australian Dance Theatre], Bangarra and Dancin’ Man – you know the David Atkins show. He was Mr. Bojangles in that. So he’s been around… I wanted to follow in his footsteps. So I quit school when I was 15 or 16, in year 10, and I did the Brent Street full-time ballet stream. Once I got to be 17/18 years old, I changed to the performing arts stream, and I graduated when I was 18. We were exposed to really great teachers and I couldn’t have asked for better. I think I owe them a lot for training me.”

So you originally wanted to go down the contemporary path. What changed?

“Contemporary was what I wanted to do, but I knew there were other things as well. I felt that if I was going to be locked into a company I wasn’t going to have the freedom to do other things… if I wanted to be in a musical, or if I wanted to be in a music video, I knew I wouldn’t have that opportunity. I thought, ‘I don’t know if my career is going to be as long because I know that [contemporary work] is really taxing on the body.’ So I went into performing arts again. I got into Fame the Musical pretty much right after I finished full time, so I guess it worked out in the way I wanted at that time. That was such a great experience, and the chance to work with Kelley Abbey was incredible.” 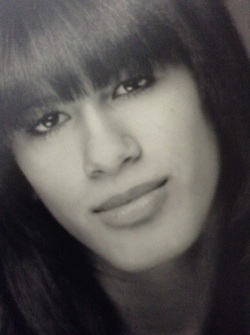 So what was it like to work on The Great Gatsby?

“I get lost for words when I think about it. It felt like a dream. [Baz Luhrmann] creates this work environment where you feel like you are not in real life. You feel exactly like it was seen to be in the movie. I couldn’t wrap my head around how genius he is. In regards to my role, it was nerve wracking, because we were the Speakeasy girls, so we had to dance for Leonardo [DiCaprio] and Toby [Maguire] and that was awkward. It wasn’t the quaintest choreography; it was a little seductive. I think he likes to push everyone and make you feel uncomfortable, but I also think it’s a good thing because you get the best out of people when you do that. I was a little star struck… I had the best time and I wish I could do it all again… He should make a Gatsby 2! Hint hint!”

On the transition to the USA, and working for Britney… How did you make it happen, in terms of a Visa?

“I was a little luckier in this situation because my dad is American, so I could get a passport. I didn’t really have to go through the massive process that most dancers have to go through. It still wasn’t easy though.”

How long have you been there now?

What has been the best part of the transition to L.A./Las Vegas?

“I live in L.A., but I go to Vegas and pay for an apartment when I am there [for the shows.] When I first moved, I got an apartment in L.A., so that is where I live, but when we have shows, which is every month or every few months, I rent a place in Vegas for that time.

I think the most exciting part of the transition was the first day of rehearsal [of the Britney Spears’ show.] It sounds corny, but it was really overwhelming – when you’ve been wanting a dream and then you finally find yourself in it, and you are dancing with dancers you look up to. Meeting these people, they are introducing themselves and they have never met me, but I definitely know a lot about them because I have been watching them on YouTube etc. for years! The experience of finally being somewhere I have always wanted to be has been most exciting.

To meet Britney was the biggest thing that’s ever happened to me, but half of these dancers have already done tours with her, and worked with her in the past, so for a while I was the crazy wide-eyed kid in the corner!”

What was it like to audition for one of the biggest stars of today, Britney Spears?

“Full on! I had a couple of video submissions that I put in from here, but Britney was like, ‘We can’t just use her from a video, we need to see her in person.’ So I had to go to L.A. and audition in front of her. 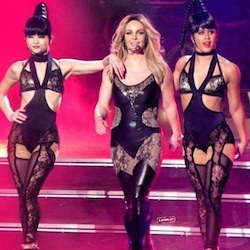 Morgan Choice, right, with Britney Spears in her “Pieces of Me” show in Las Vegas.

When I went over there, the only flight I could make was one that got me there the morning that I had to start auditioning. So I got off the flight, got a cab there, and then I am out in front with all these American dancers I have obviously never met before, and I looked like crap because I had just got off the plane! I was waiting outside and Kaylie Yee [assistant to choreographers of The Squared Division] had told me that my audition was at 10, so I was chilling, thinking, ‘Oh, I’ve got time’ … the next minute she runs out  like ‘We’re on!’ I was like running in, sweating and stressing… it was a little crazy!

I had actually missed a full week of auditions before I got there. I thought for some reason I was coming for one audition, the final call back, but they were still cutting when I got there, so we had to do maybe five or six rounds. There were three combinations and we did those maybe four times each round. I think all up we danced about 30 times. And their choreography is not easy; it’s not relaxed, so I was exhausted! I believe they [Australia’s The Squared Division choreographers] just weren’t finding any dancers that they were falling in love with for the job, which is why I think they approached myself and Kaylie. We have been dancing for them for about six years in Australia, and they wanted someone who just knew their stuff. So when I got there for the last bit of the audition process, I think that was a little difficult for everyone else who had been there for the whole week. Everyone has told me it was one of the biggest auditions that they have ever done.

After we had been cut down to the last six girls, they said, ‘Um, guys can you come in here?’… And Britney’s just sitting there in the middle of the panel and I was like ‘Ohh…’ It just felt so surreal seeing her. I have never danced so hard in my entire life.

I wasn’t actually nervous, except for when she was in there. I had no control over the situation so I just made sure I danced the best that I could – I knew I would regret it if I didn’t.”

Do you interact with Britney much while you are on the show?

“We did a lot in the rehearsals but we don’t see her that much now that the show is up and running. We kind of just see her before she comes on now.”

Is there anything else in L.A. that you are involved in?

“I haven’t really had a lot of time there to be able to know what’s going on. I am with an agency over there, but the first month I was there I was just trying to get a bed and get a room and try to live!

Next year, we will probably tour around the States, and possibly internationally, so that will be good next step.”

You were choreographing a bit before you left, especially through the group Tannos + Choice. What is happening with that?

“At the moment it is not a focus. Definitely in the future, but I want to get some more knowledge behind me before I start doing it again. I still love choreographing, but it is not where I am at…”

What would be your next ultimate gig?

“I have been thinking about the next thing I want to do. I’d love to dance for Justin Timberlake, Janet Jackson and Madonna. But I guess whatever comes my way, I’ve just got to take it. L.A. is such a big city with so much stuff happening. So, I think I’ll just continue until I see what happens!”