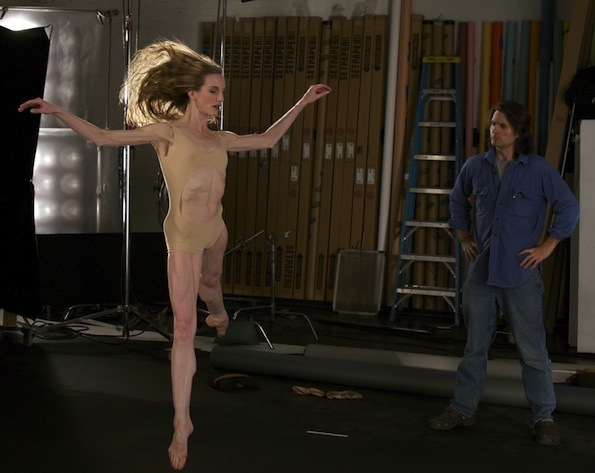 You may well have enjoyed a slow dance before, but not this slow. New York artist David Michalek’s ultra slow-mo celebration of the body, the dance and the human spirit takes slow dancing to new heights.

We are used to the spectacle of speed and we thrill to the sight of dancers executing precise moves at great velocity. In a way this is a modern staple of the artform. But what if it all slowed down? Would we still watch?

When New York-based artist David Michalek first conceived of the idea of Slow Dancing with his ballerina wife, neither of them could have guessed the extent to which this inspired and avowedly simple concept would enrapture audiences. By utilising both massive scale and incredible slowness, Michalek’s paean to the human form and the beauty of dance has become one of most talked about ‘film projection’ works on the public art and festival circuit. In 2014, it will grace the (very big) screens at the global music love-in that is WOMADelaide.

Slow Dancing is a series of 43 short film pieces featuring dancers and choreographers from around the world and across the genre spectrum, each of them filmed in ultra-slow motion (1,000 frames a second, compared to the usual 25). These five-second dance phrases are then slowed to fill up 10 minutes and projected in triptych form onto enormous, four storey screens.

As its creator, David Michalek explains, “I got interested some time ago in working with slowness as a medium; and that means a lot of different things. Not just decelerated images but slowness as a concept.”

Together with his wife, New York City Ballet artist Wendy Whelan, Michalek set out to realise his fascination with slowness as a work of moving portraiture. “I wanted to make a spectacular portrait of her,” Michalek recalls, “a portrait that looked very much like a still photograph but had what I kept calling a ‘motion principle.’”

This led the husband-and-wife team to search out the best motion analysis cameras, the kind used by golfers and ballistics experts to minutely dissect both tee shots and gunshots. Eventually they chanced upon what, at the time, was brand new technology. “When I first did this at the Lincoln Center Festival back in 2007 I can say with a high degree of certainty that I was using a camera that was not even on the market,” Michalek says. “It had been invented in an engineering lab and the cooling system wasn’t even perfected. We kept the camera cool with frozen peas.”

Slow Dancing not only unites art and science but also brings together an extraordinary array of dancers, all of whom performed their brief pieces on Michalek’s specially constructed and rather small set. From legendary choreographers like William Forsythe to street dance stars like Lil C, the project celebrates both the diversity and universality of dance.

“Every dancer I worked with was sort of a master dancer and I wanted them to bring something that was indelibly theirs,” Michalek enthuses. “I’m not really a choreographer. I’m more of an arranger, and so because I was working with all of these dance makers, I really let them bring something, a movement sequence, that felt right for them.”

The result, despite the immense scale and time distortion, is an incredible intimacy. “Both of them allow the viewer an opportunity to travel within the image. With scale and deceleration I really give people the chance to explore micro expressions and micro stories. With dance, yes they might do a certain kind of sequence, but within that there are hundreds, if not thousands of things that are not necessarily gestures or positions but are transitions between those things; and they’re filled with wonder.”

However, Michalek’s drive for slowness was not simply about velocity, but quality. “I was always looking for a certain speed; and as I said to Wendy [Whelan], I was looking for something to move at the speed of clouds passing overhead. I wanted to play that same game we play as kids where we lay on the ground and watch clouds and make shapes.”

The obvious question here is whether Slow Dancing is a work of beauty (art) or simply an object of fascination (spectacle). In response, David Michalek rubs his hands with glee. This is clearly his territory. “When people first saw it, I think it was the first time in history that anyone had seen other people moving in uncompressed high definition on that scale and at that rate of deceleration. So yes, there was fascination. They were like, ‘How did he do that?’”

Even though the technology has become more mainstream and lobotomy TV now airs programmes that centre on the ‘what would it look like slow’ idea, Michalek insists that Slow Dancing is no mere trick of size and speed. “Anyone can get their hands on a tool but that’s not where the art is. We all of us use tools but they are only a part of what we do. I mean, the real meaning of technology is technique with knowledge. Y’know, if I don’t bring an idea that’s bigger than my technology then it’s not worth much.”

Indeed, it’s this very blurring of distinctions, (old/young, black/white, high/low culture, etc.), that sits at the heart of this massively downtempo artwork. It allows us to appreciate something of what we might call ‘the beautiful.’

“Dancers are attractive people,” Michalek concludes, “and part of what we appreciate as beauty is what they emit. If I bring someone beautiful into my studio but treat them like crap they won’t really feel like giving much, so part of my technique is to treat people really well and allow them to radiate something powerful. Then, when you see that at a 1,000 frames a second and four storeys tall, it turns into a prayer.”

For more information on Slow Dancing visit www.womadelaide.com.au/program/slow-dancing and www.slowdancingfilms.com/about_en.php.