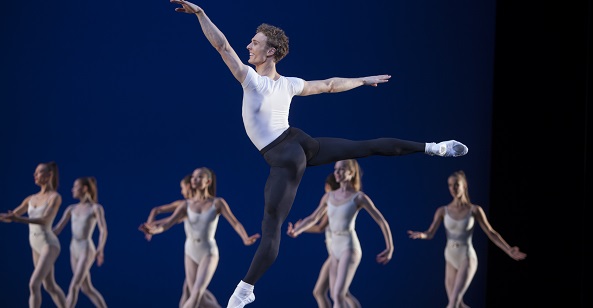 Remi Wortmeyer has come a long way from his first ballet class in Adelaide at the age of three. He is now ranked 15th in Dance Europe’s list of the World’s Top 100 Dancers, is a Principal Dancer with Dutch National Ballet and has danced some of the greatest roles in ballet. This year, he was awarded the Alexandra Radius Prize, which is the top decoration for classical dance in the Netherlands. Christopher Wheeldon, David Dawson, Alexei Ratmansky, Wayne McGregor, Lightfoot-Léon, Krzysztof Pastor, Benjamin Millepied, Juanjo Arqués, Steven Baynes, Graeme Murphy and Nicolo Fonte have all created new roles for Remi to dance in their ballets.

Remi commenced his training with Terry Simpson Studios in Adelaide before graduating from The Australian Ballet School and working his way up the ranks of The Australian Ballet. There he reached the level of Senior Artist before embarking on an international career that has seen him perform with American Ballet Theatre and New York City Ballet, as well as perform many guest roles around the world.

Also a choreographer, Remi has created works for Dutch National Ballet, Melbourne Ballet Company and The Australian Ballet, and has been awarded numerous prizes including a silver medal at the Eighth Asian Pacific International Ballet Competition in Japan. He was also nominated for the trifecta of major Australian performance awards: The Green Room Awards, Helpmann Awards and Australian Dance Awards.

Remi will be returning to Australia in December as a guest performer with Queensland Ballet, playing the role of The Nutcracker Prince in select performances of Ben Stevenson’s The Nutcracker.

Li Cunxin, Artistic Director of Queensland Ballet, said, “We are delighted to welcome Remi to perform alongside our dancers. Remi is a wonderful dancer, and it will be a thrill to present Remi in The Nutcracker to Brisbane audiences.”

On the eve of his return, Remi spoke to Dance Informa about his journey since leaving The Australian Ballet.

You’ve been working overseas for a few years now. How has your time abroad improved your dancing?

I believe I’m only as good as my understandings of life and art. So living in Europe has allowed me to see the most beautiful art from centuries past to the artists of now. I have also had ballets created on me by interesting choreographers, from Paul Lightfoot, David Dawson, Juanjo Arques, Christopher Wheeldon and Alexei Ratmansky to Benjamin Millepied. You learn more about your capacities when you’re working with a choreographer; they push you to new limits.

What have been some of the challenges of having an international career?

Time management! I love to guest and do galas around the world, but it’s important for me to maintain a strong presence and to be a good example as a principal and choreographer for the Dutch National Ballet.

Next year, I will also be the resident choreographer of a new Opera/Dance/Drama company, ODD Continent, in Amsterdam. And I’m very excited that following recent sales in Paris and California, I have my first gallery exhibition of my paintings booked in Amsterdam from April to May 2014. You can check out my paintings at www.remiwortmeyer.com/painting.

Remi Wortmeyer performs in ‘One thing leads to another.’ Photo courtesy of Dutch National Ballet.

What are some of the highlights of your career abroad?

Working with John Neumeier. I danced his Sylvia and he invited me to dance in St Petersburg alongside many inspiring dancers, such as Roberto Bolle, Alina Cojocaru, Mathieu Ganio, Isabelle Ciaravola and the beautiful artists of the Hamburg company. I was also very happy in 2011 to receive the 15th position in Dance Europe Magazine’s 100 Best Dancers in the World, and this year to receive their Critics Choice for most outstanding performance. Winning the Alexandra Radius Prize last month for the Netherlands’ Best Classical Dancer of the Year was a great honour.

You get to do a lot of travelling with your job. Tell us some of the places you have been to recently.

That’s the best part – well, that and the rush you get from performing! Recently, I’ve danced as a guest in Russia, France, Germany, Italy and America. I’m returning to Australia and Japan this month, and then St Petersburg, America and Latvia are booked for the beginning of 2014.

Are you settled in Europe now, or do you still call Australia home?

They say “home is where the heart is” and my heart is here with my husband. But Australia is a part of me. I’m Australian and proud of it!

What do you miss most about Australia?

I miss my family and lifelong friends, the warm weather, the beach and beautiful landscape. I miss having coffee on the harbour with the Bridge to one side and the Sydney Opera House to the other. Lamingtons, Pavlovas, Arnotts, Allen’s and Vegemite!

Why do you think the Dutch National Ballet is so renowned?

I think the main difference and reason the Dutch National Ballet is one of the best companies in the world is that the Netherlands is a small country in the heart of Europe, which relies on international talent. Most of the dancers are expats who have come to the country to dance in the company. In the principal rank alone there is a mix of Dutch, Russian, Georgian, Australian, American, Canadian, Republic of Slovakia, Finnish and Italian. This creates a mixing pot of styles and strengths.