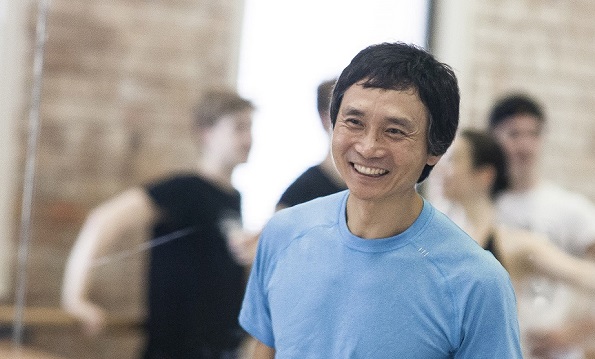 Queensland Ballet’s Artistic Director Li Cunxin has been announced as Queensland’s Australian of the Year 2014. The announcement was made by the Honourable Campbell Newman MP, Premier of Queensland, at a special awards ceremony hosted by the National Australia Day Council at the State Library of Queensland in November.

Li was overwhelmed by the announcement, saying, “I really don’t have the words to express what an honour this is! All the finalists have made such amazing contributions to the community. It is incredibly humbling to have been chosen as Queensland’s Australian of the Year 2014. I am proud to call Australia my home.”

“I congratulate Bronwen Healy, Gail Ker OAM and David Riley, and all the other Queensland Australian of the Year finalists. It is a privilege to be among such great Queenslanders.”

Awarded one of the first cultural scholarships ever endowed in China to study in America, Li subsequently defected to the West in 1981. He went on to dance with the Houston Ballet for 16 years and became one of the best dancers in the world. While in London he met and fell in love with Australian-born ballerina, Mary McKendry, and in 1995, he moved to Australia to become a Principal Artist with The Australian Ballet.

Li’s awarding-winning autobiography, Mao’s Last Dancer, is an international bestseller that became a blockbuster film in 2009.

Queensland Ballet CEO Anna Marsden said the award was richly deserved. “Li’s passion for dance is infectious, and he is inspiring the whole community.”

The announcement comes amidst a sell-out debut season as Queensland Ballet’s Artistic Director.

“The encouragement given to me in the past year has been fabulous, and I am thrilled that my dreams for this wonderful company have resonated so deeply with the community,” said Li.

This month, Queensland Ballet will present a sold-out season of Ben Stevenson’s The Nutcracker. In a new initiative for the company, Li has organised an extra performance of the Christmas favourite so that the profits can go towards establishing a Queensland Ballet Dancer Retraining Fund. The fund will provide assistance through grants and training aimed to support and guide dancers through the transition from a performing career.

“Reaching the end of their performing careers can often be challenging for dancers. We are committed to ensuring our dancers are prepared for their future off stage,” said Li.

Looking towards 2014, Li has assembled a collection of world-class choreographers, artists and designers from around the world for an amazing new season.

“Season 2014 will showcase our company, and this beautiful art form at its very best,” said Li.

Li is honoured Queensland Ballet will be the first Australian company to present MacMillan’s celebrated work, widely considered the best Romeo & Juliet in the world.

“It is an incredible coup for Queensland to secure this exclusive production of Sir Kenneth MacMillan’s Romeo & Juliet. This super-star production will attract world-wide attention, placing Queensland Ballet on the global stage,” he said.

Audiences will also have the opportunity to enjoy new dance works from exciting young choreographers and experience the process of rehearsal with Dance Dialogues. The two seasons will be held in an intimate studio theatre at the company’s home, Thomas Dixon Centre.

Regional Queensland is also in for a treat in 2014. The company is taking Ben Stevenson’s sell-out Cinderella to eight regional venues in September and October: Toowoomba, Gold Coast, Cairns, Townsville, Mackay, Maryborough, Rockhampton and Gladstone.