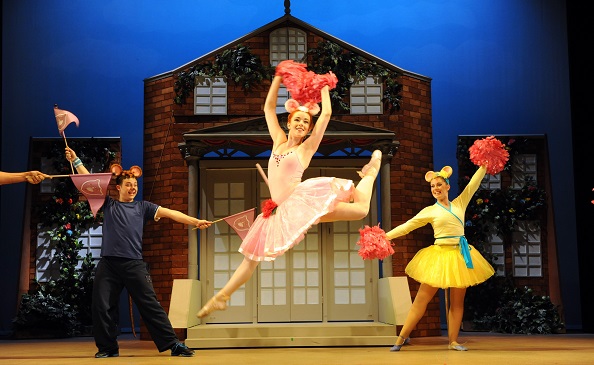 Angelina Ballerina, with a cult following of children all over the world, comes to life in this brilliant stage adaption of the much-loved British TV animation of the same name.  Shown in Sydney at the Opera House, amongst many other venues world-wide, the ‘Mousical’ saw hundreds of young children and their parents come for some quality school holiday entertainment.  It was a terrifically fun and entertaining show that was really well conceptualized and presented for this demographic.  With simple concepts and catchy songs, the moral of the story had the mice of ‘Camembert Academy’ (also the very catchy title song) learn to work together on a very important project.  The concept of ‘ballet girls’ and ‘hip hop boys’ made for a fun show that was relevant to kids that are into the magical world of ballet, but also hip hop and things such as super heroes, monsters, fairies, and everything in between.

The scripting, costumes, songs and concepts were all brilliant and well pitched for the young audience.  Bright colours and lights, big bold and constantly changing sets, and a small cast of six carried the show off in a big way.  In many ways, this show was incredibly fun, and really entertaining for everyone, including the adults that accompanied the children they brought.

Unfortunately the cast lacked a considerable amount of dance training, including Angelina.  She was capable of all the movement, including the trademark pointe work, but there was no sense of the level of grace or technical ability that should be demonstrated in this role, considering who Angelina is supposed to be (young but an aspiring professional dancer in training?).  The remainder of the cast was also seriously under-trained for a professional role in any form of dance (except perhaps Angelina’s best friend Alice), and this became a bit of a distraction. 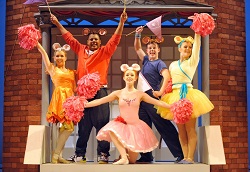 What the cast lacked in dance ability, however, they made up for in acting talent and were perfectly cast in regards to their ability to be their character and engage with the young audience.   Angelina was a perfect Angelina in this respect.  If the dancing had been of a better standard, this would have been the perfect kids show.  Angelina Ballerina’s TV reputation preceded the show and it would have been nice to see at least an above average ability in the dance department, considering the show itself is based around this art form.  It can be forgiven only for the fact that it is a kids’ show and the kids are (mostly) not going to notice this.

It was also lovely to see local dance students from the Caper School of Performing Arts invited to be a part of this show and join in one of the final dance routines.  What a fantastic opportunity for these students, and students from schools chosen to perform in the other venues along the tour!

Looking around the audience it was really lovely to see children of all ages captivated by the show and enjoying themselves, joining in when encouraged to participate, and leaving with broad smiles, chatting excitedly as they left the theatre.

Angelina Ballerina the Mousical is recommended for ages 3-8 and is great holiday fun for this age group. Make sure you take your little ones to see it when it comes to your city!