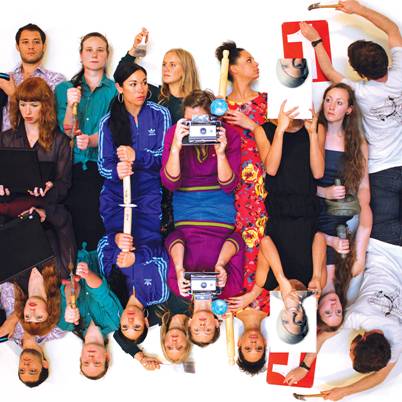 Big dance in Small Chunks was a showcase of the choreographic and versatile talents of The Dance Makers Collective.  The DMC in a relatively newcomer to the independent dance scene, and was set up as a platform and networking opportunity for young and emerging dance artists to create work and develop their choreographic and collaborative voices.

Big dance in Small Chunks was a fantastic first show for the Collective and shows a very bright future for independent dance in Sydney.  It was in fact, a real breath of fresh air.  Short, punchy pieces all had their own idea to explore and their own atmosphere to create in a small amount of time, and yet somehow, with so many different pieces, the night did not feel too packed.  There was humour, thoughts were provoked, questions were asked, and senses were stimulated.  Some works involved multi-media, but most kept it fairly simple.  Some interesting concepts were used, and some great movement phrases emerged.

The choreographers were all from the Collective, as were the dancers.  They were all very interesting individuals in their own right, so it was great to see them used in multiple contexts and styles.  There were so many different styles used within the night, so there really was no chance to get complacent as an audience member.  If you weren’t particularly loving one piece it would be over in five minutes and the next piece was guaranteed to be completely different.

There were quite a few standout works, and it would be great to see some of them expanded, particularly Dancing With by Matt Cornell, Pass Pro Toto by Rosslyn Wythes and Zeitgeist by Sophia Ndaba who had some great movement concepts and thematic ideas.   All works had something interesting about them, and as a whole the show really was quite complete.  It was incredibly good to see such fresh concepts and movement being used.

Some works had the level of development and concept expected of a student fresh out of university, but all showed the potential of the creator to make something exciting and innovative.  There wasn’t the feeling of having to be stuck in a box or do what was expected.  It had a lovely fresh voice that can sometimes get lost when an artist is more established.  A developed voice very much has its place, but it is always lovely to see the new and unproven, especially when it is on its way to being well crafted.

Worth mentioning are Marnie Palomares’ two snippets 23, 24, 3o and Triple Threat. They were hilarious, taking a seriously funny look at aspects of a dancers life.  Humour is very difficult to choreograph a whole piece around, and even though a lot of the work may have been improvised, it was well structured,  with key moments impeccably timed.

All the dancers and choreographers brought their own unique flavour into this melting pot of a dance feast, and it will be very exciting to see what they bring in the future, what they go forward with, which, if any of the works will be developed further, and if The Dance Makers Collective continues down this innovative path.