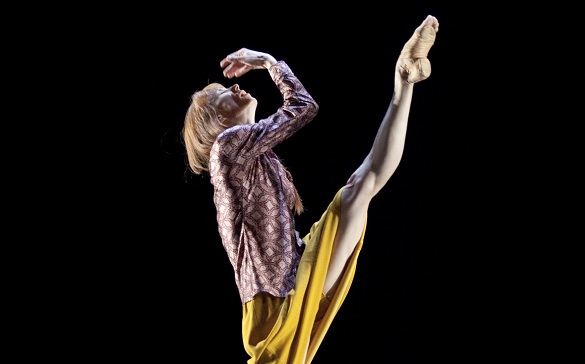 6000 Miles Away, held as part of the 2013 Melbourne Festival, offered the city’s dance fans a chance to see Sylvie Guillem, the world’s most celebrated ballerina, in performance. She danced in two of the three featured works, all of which were created by world-renowned choreographers who have enjoyed a strong collaborative relationship with the ballerina over the course of their respective careers – Jiří Kylián, William Forsythe and Mats Ek.

The first offering of the evening was Kylián’s 27’52’’. Wonderfully supported by Dirk Haubrich’s score, dancer Aurélie Cayla is electric, twisting and twitching between moments of calm as though opposing magnetic forces are somehow occupying her body simultaneously. Fellow performer Kenta Kojiri is at times her aggressor, violently pushing her away; at others, he is her ally, her hide-and-seek partner or her seductive counterpart in this complicated series of solos and duos. The alternation of short, sharp sequences with more meditative passages is extremely effective in engaging the sustained attention of the viewer, as, no doubt, is the fact that, for much of this piece, Cayla is bare-chested.

William Forsythe’s Rearray, is far more coolly cerebral. Forsythe’s life-long fascination with the classical dance vocabulary remains the driving force in this work as he pulls apart and recombines the conventional flow and sequence of movements so commonly employed in the ballet classroom. Being the academic exercise that it is, this piece is the least accessible of the three. However, it provides a remarkable showcase for the partnership of Sylvie Guillem and Massimo Murru. Though casually attired in what from afar could be mistaken for a t-shirt and jeans, Guillem’s technical faultlessness is, as always, breath-taking. Though the aesthetic and spirit of the work is contemporary, a salute to tradition and the dancers’ respective years at the Paris Opera and La Scala Ballet Schools may be discerned by astute ballet fans.

The highlight of the evening is Mats Ek’s Bye, in which his characteristic wit is in clear evidence everywhere. The piece opens on an empty stage, but for what appears to be a rectangular screen onto which a live close-up of Guillem’s eye is projected. Guillem plays with the audience and the camera until, rather unexpectedly and to the delight of the audience, she reaches out and steps sideways out of the screen and on to the stage.

Guillem’s movements retain a certain gravity for much of this work, though her arm and leg flicks remain detached and light. Intentionally or not, she seems to compel us to consider our own dissatisfaction with our physical limitations, which a part of us always wants to escape. This struggle between reality and the dream is, like this work, occasionally comical. This quality of everyday whimsy pervades the work, whilst rare expansive sequences intermittently burst forth, providing the viewer an unexpectedly profound sense of release.

6000 Miles Away offers three very different works with little connection between them. Though some may question the wisdom of pairing these pieces together, those who are guided by their desire to see Guillem featured in a program of works by choreographers who have made their stamp on her career, and vice versa, will view the selection as a rare delight. After decades on the stage, Guillem remains as formidable a performer as ever and Melbourne’s dance world is undeniably privileged to bear witness to her extraordinary talent.