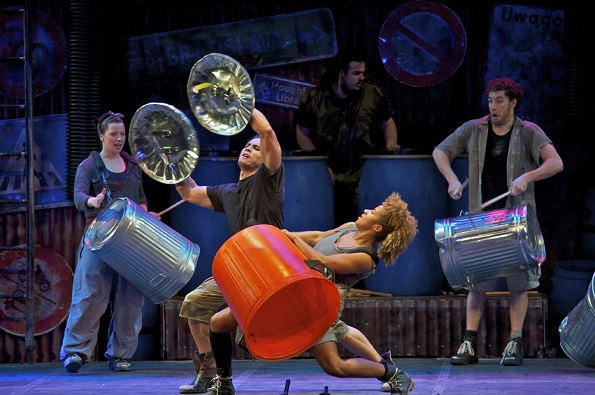 The Broadway, West End and international sensation STOMP is back – and it’s better than ever!

Following their acclaimed performance at the Closing Ceremony of the London 2012 Olympics, STOMP returns to Australia from August 13, with new routines, new choreography and new music.

Wordless, witty and fun, STOMP has become a global phenomenon over the last 22 years. Its universal language of rhythm, theatre, comedy and dance has resonated with audiences throughout the world, setting feet stamping, fingers drumming and adrenalin rushing for over 15 million people in 50 countries across five continents. STOMP is currently playing in the UK, US, throughout Europe and South America.

Eight performers use everything from supermarket trolleys to Zippo lighters, plastic bags to bin lids, and even the kitchen sink to hammer out an explosively feel-good rhythm.

Two new routines that have been introduced in 2013 include Trolleys and Frogs. Trolleys taps into the everyday experience of negotiating a busy shopping aisle with a fully laden supermarket trolley, with the piece transforming into STOMP’s first ever fully fledged drum corps march. Certainly an eye-catching spectacle! Frogs explores the bizarre sonic possibilities of a variety of plumbing fixtures. It has to be heard to be believed!

Producer James Cundall, CEO of Lunchbox Theatrical Productions, says, “STOMP has to be one of my favourite shows. It is a unique and supremely clever idea, to create music from everyday objects and combine it with side-splitting comedy and intricate choreography to produce a polished theatrical performance, the likes of which you’ve never seen before.”

STOMP last visited Australia in 2009 and enjoyed a sell-out season. “We are really excited about coming back to Australia,” says STOMP’s Co-Creator/Director Steve McNicholas.

WIN a Double Pass to the opening night of STOMP in Sydney at Theatre Royal on September 10th.

To Enter: Email info@danceinforma.com with your Name, Date of Birth, Email Address, Postal Address and Phone Number and answer this question: “What two new routines are featured in STOMP 2013?”
Entries close August 27.