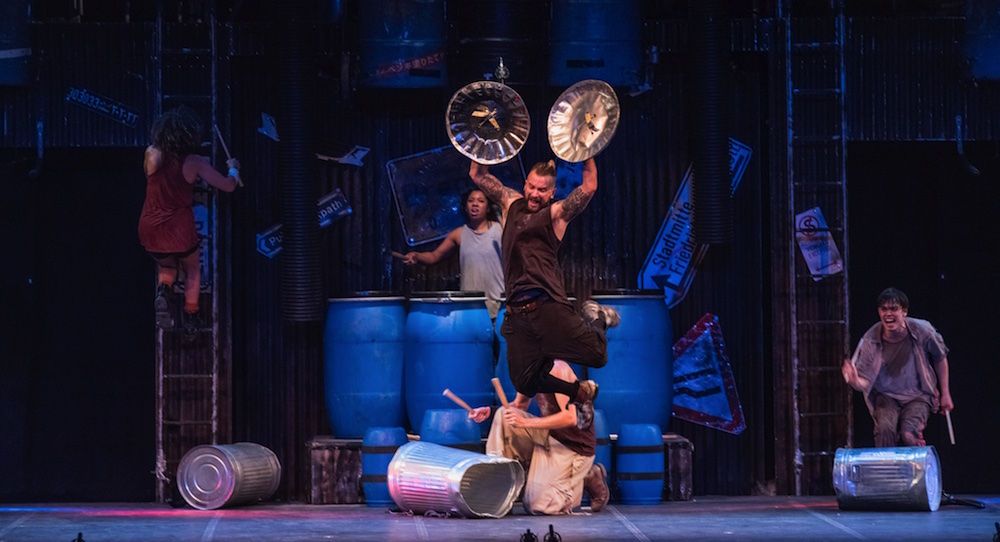 After a successful season in 2013, STOMP is back in Australia, and is funnier and louder with even more hard-hitting, highly energetic complex rhythms this time around.

It’s been over 25 years since STOMP made its debut in London, and this explosive show continues to delight audiences worldwide. Bringing their percussive beats to Sydney’s Capitol Theatre, the small cast of six male and two female performers weren’t the only ones making some noise. The audience also got in on the act, clapping and stomping their feet. With no dialogue in this show, it was up to performer Phil Batchelor to demonstrate the rhythms, and the audience soon caught on and had plenty of fun trying to keep up.

Set in an urban junkyard with large drums and a range of percussive objects mounted on steel fence panels, this provided the perfect playground for the performers. In casual tradie work wear with steel capped boots, shorts and t-shirts, this eclectic group of performers entered, each with a broom, as they brushed, knocked and hit it their way around the stage in this signature piece. Using different angles of the broom to create different sounds both in unison and also more complex counter rhythms, it was no surprise that with their sheer energy and force, a few spare brooms were needed on standby.

Without a narrative, STOMP delivers a collection of short performances punctuated with humour and innuendo. Angus Little provided many moments of comic relief as the odd one of the group who always seemed to draw the short straw. His comedic timing was on point and had the audience laughing throughout.

Part of the appeal of STOMP is the imaginative way they take everyday, ordinary objects and turn them into musical instruments, from paint cans, zippo lighters, pipes, basketballs, matches, newspapers, inflatable donuts, garbage bin lids and even the kitchen sink! Each object leads the performers to create different rhythms, and together as an ensemble with careful timing and precision, they produce catchy musical compositions that will leave you in awe. A crowd favourite was the quieter zippo lighters, as not only did these create a gentle clicking sound and sweet melody, but these were also visually interesting as the zippo lighters flickered on and off on a dark stage. Shopping trolleys were another unique instrument that looked like a lot of fun. The performers were riding the trolleys, gliding from one end of the stage to the other, as well as crashing them together, twirling them around and using the objects inside them to create even more rhythms. There were definitely no sticky wheels on those trolleys!

As well as making music out of objects, the performers used body percussion to create rhythmical grooves. Batchelor performed a standout solo, energetically stomping, clapping, slapping and cheek popping, using different parts of his body to incredibly become his own instrument.

STOMP is a one-of-a-kind percussion show filled with musicality, rhythm, high energy, fun and laughter. It’s only here for a short time, so you’ll need to be quick to catch it before it disappears.

STOMP is at the Capitol Theatre Sydney until 5 August. For tickets, visit stomptour.com.au.