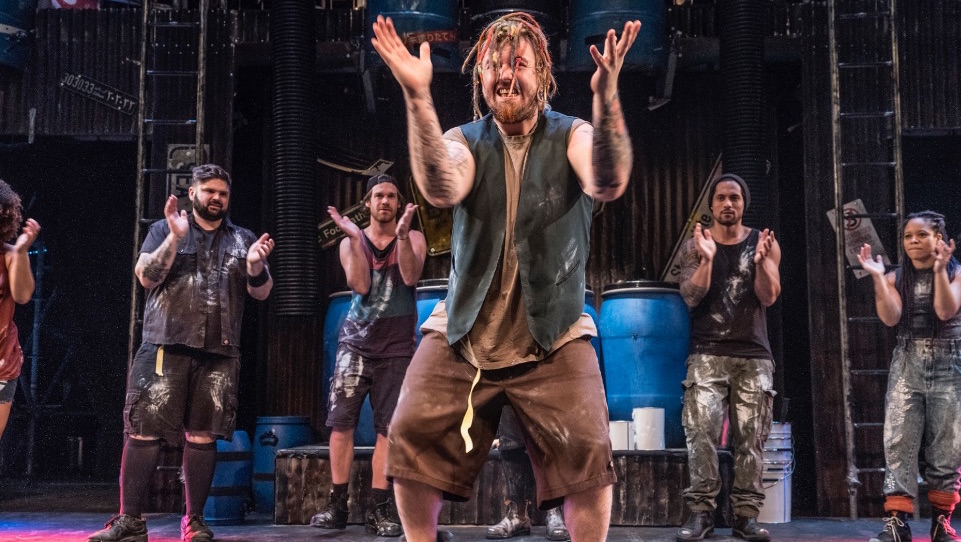 Performing in a highly successful show and doing what you love in front of sell-out audiences around the world is the dream for many performers. Fifteen years on and still going strong, Australian Angus Little is living the dream as a cast member of the international touring company, STOMP.

It’s been a full circle journey for Little. “I first saw the show in Melbourne in 1992, when I was 10 years old when they were first touring the Melbourne Comedy Festival,” he recalls. “My father is a comedian, actor and writer, so he was doing a comedy show in the same venue in Melbourne, and as kids, me and my brother saw them a few times. We got given little brooms to play with as kids and we’d mess around. I never expected to be part of the show. I fell into it, really. I was never a musician. I learnt piano when I was six or seven, but I never really stuck to any instrument. They really had to teach me how to be a drummer when I started. I could move, I was funny, but I wasn’t so drum savvy, so that’s something I’ve learnt over the years, and I’ve got better and better at it of course.”

In STOMP, the eight performers on stage use an array of ordinarily mundane objects to create musical magic. Little explains that the composition of the show’s percussion numbers are cleverly and precisely orchestrated. “The show starts with brooms,” he says. “There are eight of us on stage, and if you think about it, there are eight beats in a bar. So, if you’re a six, you have to wait and play your six, so all together it becomes music. We make tunes with Zippo lighters, and it’s about when you open and light the Zippo. Everyone is playing exactly the same line, but because you’re playing it at a different number, it becomes this tune. Then we change out for smaller lighters, and then the whole routine becomes like fairy lights because it’s the first time that the audience gets to see the rhythm rather than just hear it. It’s really pretty. It’s like watching fairy lights that are made by humans. It’s not programmed in by computer.”

While most of us use Shopping Trolleys for our groceries, on stage these become another unusual percussion instrument in the show and one that is Little’s favourite to play. “There are a whole lot of different sounds you can play with it, and we play it in 5/4, so it sounds like the Mission Impossible tune,” he describes. “Luke Cresswell, who wrote the show, has put triplets on the top of it, so when you’re learning all the different parts it doesn’t make sense, but when you put it all together it makes this crazy tune, plus you get to ride them around like go-karts. When the routine kicks in, it’s really tribal because we’re stamping our feet and bashing these trolleys and we treat the trolleys like you wouldn’t treat them in the supermarket. We slam them together and we really mash them up. It’s really good fun!”

So when playing all these interesting objects, has anything ever gone wrong on stage? “Oh yeah!” Little shares. “Things don’t always go smooth. We rehearse every day two hours before a show, but there are routines that if it falls down it’s not easy to get back, like “Basketballs”. If you lose a basketball and you don’t get another one quick enough, everyone else has to wait for you, and that’s when we have to talk on stage. We have a character called Sarge, and he’s like the boss man, so if anything falls down we look to him, and he’ll tell us what we’re doing and how we’re going to get it back. But yes, it does go wrong, but not as much as you’d think with a show like this.”

In such a rhythm-filled show, it’s no surprise that Little finds it hard to switch off creating rhythms in his everyday life even when he’s not performing. “I’m always doing it, and I don’t even know I’m doing it!” he says. “Sometimes I’m tapping on things, and if I get in a lift or somewhere that makes a good bang, I find myself trying to find the base drum and the snare, and I just play on everything.”

Returning to his homeland, Little is excited to be bringing STOMP to Australian audiences. “STOMP is a hard core industrial high octane show, and it’s always different,” he explains. “If you came one night and came the next night, it would be the same music but the comedy and all the nuance will be different. It’s kind of fresh every night, and it’s pretty spontaneous, too. The audience is involved as much as they can be. We break the fourth wall as soon as we start, and the audience know they’re allowed to get involved. So you can come see the show and see it again, and it will be different and you will still enjoy it. I think that’s why it’s been such a success, because it’s never the same really.”

STOMP will premiere at the Comedy Theatre Melbourne from 1 May, The Star Gold Coast from 31 May, Adelaide from 6 June and the Capitol Theatre Sydney from 31 July 2018. For more information and to purchase tickets, visit www.StompTour.com.au.