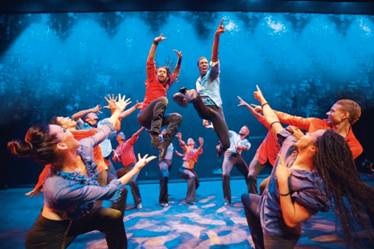 Direct from Cuba, the international sensation, ‘Ballet Revolución,’ is, in my opinion, the most dynamic, sensual and engaging ballet performance that has been brought to Sydney, Australia.

The evening began with a beautiful neo classical pas de deux centre stage as three couples shadowed in the background.  With the lighting progressively growing stronger, it revealed the immaculate and sculptured body of each dancer that became ever more present, as their disposition of strength and sound technique immediately captivated the audience’s attention.

Within minutes the stage transformed into a vibrant fiesta with intoxicating rhythmic beats and full colour from costumes through to lights, all which fused contemporary elements of street dance and jazz with a hint of blues.  Round kicks were effortlessly executed as were each lift and turn.

The men were to die for.  Delicious extensions, sensual contracted curves, pronounced stance and propelling power with each jump, all displayed with an ease of smooth masculinity.  Heat absolutely oozed from the stage, as did the passion for dance.

The women on the other hand were just as incredible in their fun, sexy, flirtatious, elegant, yet edgy manner.  Jenny Sosa Martinez was the most refreshing ballerina of 2013 to hit the stage!  She lit up the stage with a particular dynamism and strength, completely enveloped by grace.  Lianett Rodriguez Gonzalez had a Rhianna like attitude and coolness that simply demanded ones focus and she became the favourite of many spectators. This company is full of young and brilliant athletic dancers who prove their diversity.

Choreographic pieces were created to hits by Usher, Shakira, Beyonce, Enrique Iglesias, J-Lo and Prince, fused with Cuban and Afro beats, classical interjections and a hot tango remix of the hit song Roxanne by The Police.  The dancers were accompanied by a live band that brought authentic Cuban flavour to the evening – not to mention the bongo solo that brought the house down!

It was such a hot, diverse, powerful and entertaining performance.  The way dancing should be!!  The dancers actually looked like they were going to combust from being so alive on stage.  They were immersed by energy and life that was exerted from every fibre of their being.  It was HOT HOT HOT!!  One can only say ‘thank you’ or ‘muchas gracias’ for bringing such a revolution to ballet!