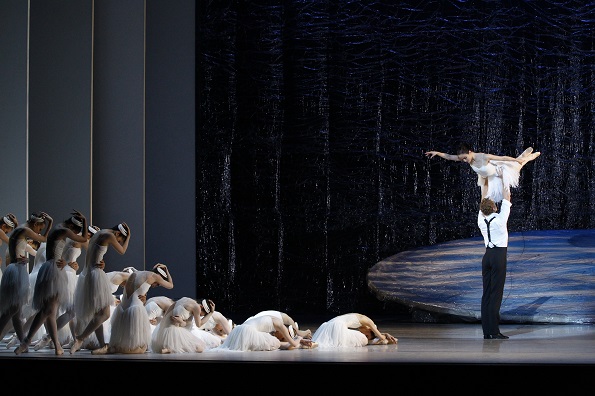 I officially have a new all-time favourite ballet. Get ready for some serious gushing, because I just had my mind blown by Graeme Murphy’s Swan Lake.

Where to begin? Let’s start with the design. Kristian Fredrikson is indisputably a master in his field and the joining of forces with Murphy and lighting designer Damien Cooper creates a dream team indeed. As the curtain rose on each act, I caught myself audibly gasping at the sheer glory. The costumes, while still elegant, are more modern than in the traditional Swan Lake, plus there are no men in tights, so we can safely bring our non-dancing friends. The design of Act 3 is particularly breathtaking, almost gothic in its darkness, seemingly illuminated only by dazzling gowns and jewels.

The classic Swan Lake story has been modernised and is disturbingly relatable. Most importantly, rather than the traditional Odette/Odile double role, the character of Odile has been re-imagined as the calculating ‘other woman’, the Baroness von Rothbart, danced tonight with fearsome prowess by Lana Jones.

Tchaikovsky’s precious score is used in a whole new way, and it works. The traditional black swan fouette music turns up where you least expect it, and in some ways is more fitting and meaningful.  Nods to the traditional Swan Lake are made at just the right moments, such as in a beautifully twisting take on Cygnets, or in the releves at the end of Act 2. The use of black/white symbolism for good and evil is turned inside out, with many layers of subtlety amounting to something incredibly striking. There is so much detail in Murphy’s choreography; it is so cleverly crafted and so exciting from start to finish. Some may argue that there are almost too many ideas, too much happening at once visually, but I found the fullness exhilarating.

Ballet certainly has the ability to stir emotion via beauty, but to move on a deeper level, I find, is rare. I go to the ballet to be transported to a world of exquisiteness, but expect to get my dose of emotional enquiry from a contemporary dance work. Tonight, however, I empathised to the point of tears at the scene in Act 1 where Odette is driven to a point of absolute desperation by a philandering Siegfried. It is the single most human thing I had ever seen depicted in a ballet, and it was only the beginning. When she makes her triumphant return in Act 3, she makes exactly the kind of impression every woman dreams of making when running into her ex at a party, but of course, the worst is yet to come.

What absolute marathon roles for Amber Scott and Adam Bull, respectively Odette and Prince Siegfried. Both dancers are sublime technically and artistically, and brought wonderful depth, maturity and realism to their characters.

It is easy to see why this production received standing ovations in New York in 2012, and won Best Foreign Dance Company at the UK Critics’ Circle Awards in 2005. Watching it, I was in a state of rapture from beginning to end. Beyond being a magnificent visual and aural explosion, Graeme Murphy’s Swan Lake did to me exactly what art is supposed to do: it provoked thought and real emotion. OK I’ll stop now, I seem to have run out of superlatives.