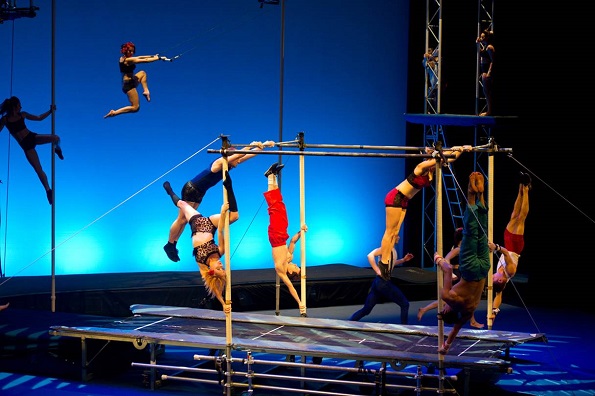 On a freezing cold mid-week evening, an eclectic crowd of circus lovers packed the theatre at Australia’s premiere circus institute to see what the second year students had to offer.

The National Institute of Circus Arts (NICA) provides aspiring circus performers with a three year Bachelor of Circus Arts that readies the students for a demanding career under the big top.  One False Move drew its inspiration from the events and characters that inhabit the fictional world of the Film Noir genre.

The Film Noir theme gave the performance an almost seedy undertone that mingled well with the light hearted aspects of the genre and set the stage for  myriad tricks, tumbles, trapeze, tightrope and of course, comedy.

While One False Move had all the elements of a circus show you would hope to see (German wheel, tumbling, slapstick, hula hoops, juggling and balancing acts), what was most entertaining were the moments where an ordinary object was utilised in a unique and unexpected way.  There was a fantastic number that involved the whole ensemble and a humble wooden table.  The performers tumbled, leaped, crawled and twirled over, under and around the table.  It was brilliant.  Another routine that bears special mention involved an egg and a single performer.  It was expertly performed and thoroughly entertaining.

Meredith Kitchen and Megan Jones co-directed One False Move and the influence of Kitchen as the students’ dance teacher was obvious.  The show incorporated dance more than I have ever seen at a NICA show before and the students moved with added refinement.

The strength and ability of the performers is truly extraordinary and it was only when a hula hoop was dropped or a ball went astray that the audience was reminded that this was a student production and not a group of professionals.  Even more amazingly, these are only second year students so I can’t wait to see what they can do next year!