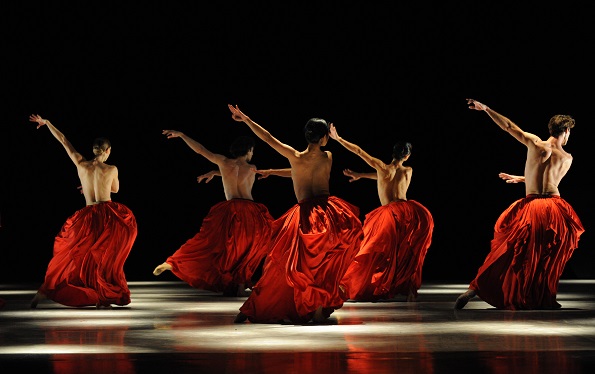 I love a triple bill, and Vanguard is the best one I have seen by The Australian Ballet in years. It presents a perfect cross-section of contemporary ballet since, well, since ballet met contemporary.

The man largely responsible for that shift towards a new ballet aesthetic was, of course, George Balanchine. One of his definitive works, The Four Temperaments, opened Vanguard and was performed with breathtaking precision and grace. To make something this intricate look effortless while maintaining synchronicity as a group is a huge achievement; it was so pleasing to behold that I could have gone on watching it for a lot longer.

Choreographically, The Four Temperaments is a blizzard of clever configurations, changes of weight and direction, and fluid, expansive lines. Design-wise, it’s clean as a whistle. The dancers are meticulously turned out in Balanchine’s signature belted leotards and tights; the stage is bare and backed with a rich blue cyc. Choreographed nearly 70 years ago, this is a work that still feels fresh and modern; Mr. B. was clearly an artist ahead of his time. 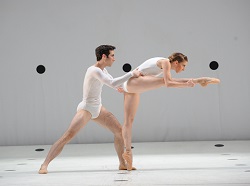 Brett Chynoweth and Lana Jones of The Australian Ballet in ‘Dyad 1929’. Photo by Branco Gaica.

From post-war New York City to mid-90s Holland, the second act of Vanguard brings another masterwork from another master choreographer. Bella Figura is a beautiful example of the work of Jiří Kylián, an artist who is well-known and loved for creating a brand new language, a perfect blend of classical and contemporary. His movement is so fluent, rich and warm, full of soul and with moments of humour.

I was particularly impressed by Ingrid Gow, a dancer of the corps de ballet who featured prominently in Bella Figura (and also stood out in The Four Temperaments). Graceful, self-assured and with fierce technique, Ingrid is definitely an artist to watch.

Vanguard is capped off with Dyad 1929, the first half of a Ballet Russes-inspired diptych by British choreographic heavyweight, Wayne McGregor. It’s an exciting end to the programme. The vocabulary is kooky, complex, lightning-quick and ferociously athletic; the dancers execute it like weapons of mass articulation. The work builds to a frenzied climax, a fireworks display of bodies flying across stage in some secret mathematical formula.

It is interesting to note that McGregor, now the Resident Choreographer of the Royal Ballet, had no formal ballet training. His style is certainly idiosyncratic but it makes full use of the outer reaches of the classical technique, pushing its performers to their limits.

What a challenge for the orchestra, and for Music Director and Chief Conductor Nicolette Fraillon. Musically, Vanguard comprises such a vast variety. In the case of Bella Figura alone, the work of five different composers is used, from Vivaldi to a 20th century piece by German-American Lukas Foss. Then of course, there is Steve Reich’s quite frankly insane Double Sextet, used for Dyad 1929. Bravo to Ms. Fraillon and Orchestra Victoria.

I always think The Australian Ballet are fantastic but this is the most ‘together’ I’ve seen the company look. Vanguard gets five stars from me.

Photo (top): Artists of The Australian Ballet in Bella Figura,  as part of Vanguard. Photo by Branco Gaica.