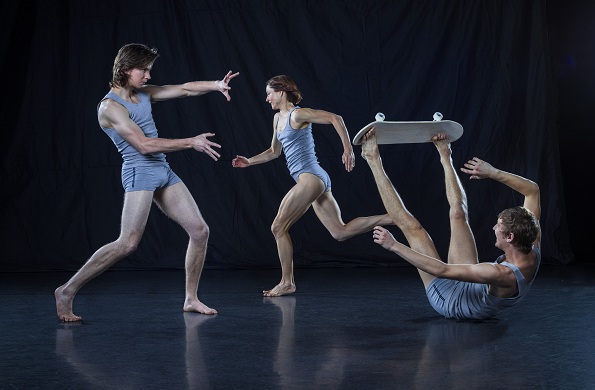 Take 206 bones and make them dance. This is the challenge currently consuming one of Australia’s brightest young choreographers, Larissa McGowan, as she puts the finishing touches on her first full-length work, Skeleton.

Brisbane-born McGowan has been on an upward trajectory ever since she graduated from the VCA as the “Most Outstanding Talent” and moved to Adelaide to join the internationally renowned Australian Dance Theatre. Green Room gongs, Helpmann Awards and SYTYCD guest spots ensured her star kept rising. When Garry Stewart made her Assistant Choreographer at ADT in 2008, McGowan’s elevation was all but sealed.

Five years down the line and Skeleton is set for twin seasons at both the Adelaide Festival and Melbourne’s Dance Massive event. It’s a key moment in her career. “Yeah, I’ve been trying not to think about that too much,” she admits. “But I guess I’ve always been someone who has put herself out on a limb, both in my dancing and the work I’ve made; and this definitely is.”

Although Skeleton is not her first foray into choreography, Larissa McGowan is fully aware of its significance. “This is my first full-length work, but in saying that, I’m wondering what full-length actually means. I know I get impatient after about an hour.”

As the title suggests, the work seeks to peel away the skin and get down to the bones. “I think with all of my work I’ve been interested in one body system or another,” McGowan explains. “I like how that informs the kind of movement you can make; but also not make … As part of our research we looked into what happens when certain bones break or age. What happens to the body and our capacity for movement? How would this then influence a dance piece?”

While admitting that this might sound “a bit morbid” McGowan insists that the work is actually a high velocity piece with incredibly intricate staging involving the use of “x-ray screens.” To help her keep such a technically precise work coherent she engaged theatre director Sam Haren. “There’s no narrative with this, it’s just reflections, memories and ideas, so it’s been really great to work with him because he’s been able to help us with flow, with how things lock together.”

In addition to staging and choreographic challenges, McGowan is also one of the five dancers in Skeleton. “When I’m on stage I just have to think about myself and be focused,” she says. “I really don’t have a choice in that. In the studio it’s been really interesting. That’s where it’s been really good having Sam on board, because it’s really hard to step outside yourself and see yourself on stage.”

However, amidst the precision and the bones McGowan still manages to insert her love of pop culture. By utilising objects like BMX bikes, skateboards and high heels she juxtaposes the transitory and disposable nature of pop with the near permanence of the skeleton. “That’s just it,” she enthuses. “These objects, they were just things I grew up with. They’re part of memory really. It’s really interesting how kind of skeletal memory is too, and how it gets sketchier as you get older.”

Perhaps paralleling her penchant for pop culture is McGowan’s commitment to the ‘e’ word – entertainment. “I’ve always wanted to make work that was fun,” she declares. “I’ve never really been into what you might call self-indulgence. It’s good if an audience can feel that they get something. I think they get more involved that way rather than just staring at beautiful movement all night.”

Entertainment notwithstanding, Skeleton will not be heavy with puppet on a string, dancing bones-style choreography. But it will be fast and exacting. As McGowan states, “It’s very much pushing the dancers to the limits of what their bodies can do. This is different for each dancer and that’s exciting. Each body has its peculiar traits, its own history and moulding them into something coherent is one of the real challenges of making a work like this.”

Featured alongside McGowan onstage will be her friend Lisa Griffiths and three young male dancers from Adelaide. Describing the boys as “really good movers,” she can’t help but allow herself a joke at their expense. “Yes, it’s three young boys working with two experienced women; and we’ve definitely been moulding them.”

Luckily for the lads they are in very good hands.