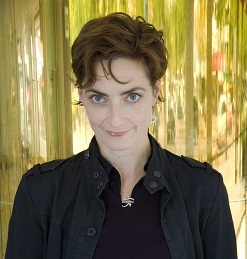 “It’s just like Holland!” Anouk van Dijk exclaims cheerfully as she arrives at the Chunky Move studios. It’s 10:30am in late February and Melbourne is doing that thing where – after a prolonged streak of stifling weather – it’s really, really raining.

Van Dijk and I are meeting up today to talk about her new work for Chunky Move, 247 Days, which will premiere at the Merlyn Theatre on March 15. The new creation will be her second work as Artistic Director, having taken over from Gideon Obarzanek last year. Her 2012 work An Act of Now was a huge success, or in her words, “a total blast. Very outgoing, very site-specific and with lots of people involved. It was really an event.”

Presented as part of the Melbourne Festival, An Act of Now won best new Australian work in The Age Critic Awards. From van Dijk’s perspective, it was an excellent way to begin work with a new group of collaborators, to break her into her new role in a new country – and now the time has come to go deeper.

“I have to start looking at things from different perspectives, inevitably,” she explains. “Moving to the other side of the world, moving to another culture, how do you communicate with people? In Europe, we all speak English with each other because that’s the only language we can all share. You develop a particular kind of language together, which people call ‘eurenglish’. For the last couple of months, I’ve been trying to understand how to speak English here.”

This question of communication and human interaction forms the basis of 247 Days. Van Dijk is interested in how we view the world, and how the world views us. “Do we behave as expected, or accept who we truly are?” asks the press release for 247 Days. “If we could observe ourselves in an unguarded moment, what would we see?”

To begin finding answers to these questions, van Dijk and her dancers made “a few thousand beautiful pictures” with celebrated dance photographer Jeff Busby, who also collaborated on An Act of Now. These images, amongst other devices, became the inspiration which has informed the choreography.

“I wanted to literally capture a moment in time, so we started to make photographs of people in movement; the dancers, their families, their friends, the staff, their families,” says van Dijk. “I wanted to capture these moments when people are taken off guard, or about to recover from something or surrendering into something. For me, this also stands for this moment in time, the discovery process we’re in.”

The cast of 247 Days includes five dancers from An Act of Now and one new addition, Tara Soh, formerly of Australian Dance Theatre. All in their early or mid-twenties, they are at a point of discovering new ways of moving and new ways of thinking about dance, van Dijk explains. “They are all discovering certain things for the first time and becoming aware of certain patterns and mechanisms, in themselves and in society. It’s a really exciting departure point for a dialogue, for all of us,” she says.

Part of the dancers’ discoveries can be attributed to learning Countertechnique, a method of thinking and a practice that van Dijk has developed over the past 20 years. The basic principle is that, rather than working with a ‘centre’, one works with energy directions. Every direction has an opposite and the two of them together create the balance. This application of this idea results in more freedom in the joints, freedom of mobility, ease of directional changes, and the ability to retain speed, momentum and balance. “That’s the mechanics we work with, and I’ve developed a toolbox full of practical knowledge the dancers can use in order to achieve this,” says van Dijk. “It enables them to be more proactive in their training, to deal with injuries better… and it makes movement less exhausting.”

247 Days is being presented as part of Dance Massive, a bi-annual festival of contemporary choreography. It’s an intoxicating time for Melbourne dance fans, with works being presented by Stephanie Lake, Larissa McGowan, Lucy Guerin, Antony Hamilton, Jo Lloyd and many others. “I would like to see everything,” van Dijk says emphatically. “That’s very frustrating, because in the first week I can’t see anything. It’s a really exciting way for me to get to know, in a short amount of time, many Australian artists that I don’t know yet.”

The spirit of curiosity, exploration and discovery is all around her, it seems. She left her European homeland last year to take up the coveted post of Artistic Director, the first person to take the helm of a much-loved company after the founders. So, while it also means “what’s going on in people’s consciousness 24/7”, the title of her new work also stands for the amount of time she has been in Australia.

As we head into Spring, these stifling days will become a memory, documented in part by a dance work created to capture the moment. And, with the next 247 days of van Dijk’s journey sure to bring more of our famous weather, I’m sure she will feel right at home in Melbourne.