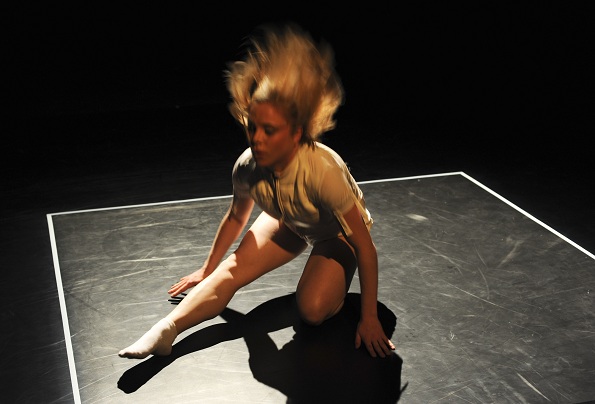 You Move is where true artistry is being developed.  What a treat this show was. Tucked away in the unassuming Marrickville locale, Sidetrack Theatre played host to this artistic gem.  Tenofus was a collection of five solo works by five dance artists collaborating with five choreographers. Each work was individually crafted, emphasizing a new step in the journey for both the dancer and the choreographer.

The night opened with Compact Homosapien by Anton. Performed by dancer Anna Healey, it was freakishly amazing.  ‘Freakish’ because of the costuming, which was a suit designed to give the illusion of the skeletal system, and because of the movement quality, which was as completely mesmerising as it was intense.

Based on the “compressed universe of constructed limitation where a performer is placed into a small squared cube as a physical experiment”, Compact Homosapien explored this concept on many levels, not just peeling back the first layer, but reaching into the depths of what this experience might entail.  It was brilliant.  You could not take your gaze off the dancer as she explored her limited space and the psychology of feeling trapped.  Very real in its approach, it wasn’t performed as you would typically expect. It was the movement quality and choreographic elements developed through the process of working with this subject matter that really shone. Anton continues to out-do himself with every new work he creates.  A driving force in the independent dance sector, he is developing a completely unique voice that is one to be reckoned with.

Second in the night was Ephemera by established choreographer Narelle Benjamin.  In her trademark eastern world influenced style, she created a piece on dancer Jayne Field, a long term You Move’r who, along with every other performer in the show, has really come an incredibly long way in her journey as an independent dance artist.  Beautifully performed, with such a sense of strength, the choreographer’s work shone through this dancer. Field has had the chance to perform quite a few of Benjamin’s works, so this piece sat very well on her.  She was able to push the work to another level, making each moment her own, whilst staying true to the authenticity that comes through in Benjamin’s work.  The work referred to the life cycle of an insect, reflecting on the prime of youth and the fragility and fleetingness of both.  Most significant in the work was the use of a Chinese fan as the only prop. The performer continued to manipulate and snap it, as if to say each life and season comes and goes so quickly, like a snap of the fingers.  It was a beautifully crafted work.

Third came Palimpsest by Tony Osborne, in collaboration with performer Imogen Cranna.  It was an interesting work using spoken verse layered to create an effect of repeated words and merging sentences (a spoken technique called ‘palimpsest’). It represented a search for sanity amongst the confusion of dementia and Alzheimer’s. Explored in a very pedestrian manner, the performer took us on the visual and vocal journey that was quite intriguing.

Next was Table for One by choreographer Vicki Van Hout, performed by dancer Melinda Tyquin – another dancer who has really grown into her own as a performing artist.  In her signature style, Van Hout used the influence of Australian Indigenous contemporary movement merged with a current context to create the work.  It was completely fascinating with many layers that unfolded to explore the effects of ‘social’ media, which seems to lead to some increasingly ‘anti-social’, obsessive, and even illegal behaviour.  This work was humorous, intriguing and not at all predictable.

Finishing the program was a work by choreographer and performer Angela French.  It was a statement on the exploitation of the poor, specifically how well-off communities in their desire for ‘nice things’ compromise the water supplies of poorer communities.  The work had a great message but was a little disappointing in its presentation. This work is one with loads of thought, yet it was undeveloped to its fullest potential, needing further exploration and development.  It would be great to see this piece in 12 months’ time when it has been taken that few steps further into innovation, so that it can have the impact intended.

All in all, this show was a success, and it cannot be stressed enough that more of the dance community, from all walks whether it be commercial, classical, or another artistic medium altogether, need to see You Move Company at least once in their lifetime.  The creativity that comes with every presentation is always so invigorating and fresh.  Artistic Director Kay Armstrong and all the collaborators should be applauded for their fantastic efforts.