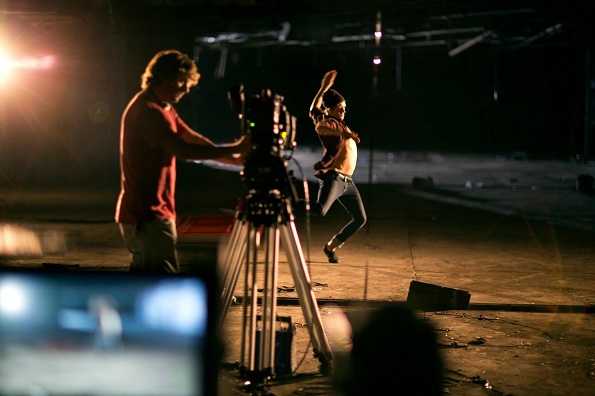 If you haven’t yet encountered Travers Ross, you are bound to at some point.  Hailing from Coffs Harbour, he is a dancer that can do it all and if he hasn’t done it yet, it won’t be long until he does!  Travers is a born choreographer and dancer. He started creating works on other dancers from the age of 12 at Julie Ross Dance Studio, owned and run by his mother.  Travers has performed overseas and he choreographed on Australia’s So You Think You Can Dance.  He also has his own dance band that comprises of a group of musicians who are also dancers, has been involved with a Bollywood company, and has a long standing association with Stalker Theatre which is Australia’s premier physical theatre company.  On top of all of that, Travers was the star of an ABC Australian Story documentary when he was still a dance student.

Travers movement vocabulary is so rich that he told Dance Informa that he can put on a piece of music of any kind and not only dance to it but create a piece simply by free-forming rather than pre-choreographing.  Travers also composes music and is interested in dance as therapy to help people heal. He has created workshops that allow dancers to achieve emotional and mental breakthroughs.

A scene from the trailer of ‘Just Dance’

A keen surfer, Travers was in Byron Bay last New Year’s Eve when he encountered Sheena Reyes who approached him to work with her on a movie script she had written.  Sheena had researched dancers on the internet and found Travers. She felt that he was a perfect fit for her work and that he would be able to bring her script to life.  Their New Year’s encounter lead to a friendship and blossoming partnership, and the exciting dance film, Just Dance, began to evolve.

A soon to be released teaser trailer for Just Dance features the following talented Australian cast:

Still a work in progress, the film’s final cast is yet to be determined. Having just relocated to Melbourne to immerse himself in the city’s diverse arts culture, Travers is now overseeing the production of Just Dance and will be sourcing some of Australia’s best dancers, dance troupes, and performers.  The film will be shot on location around Melbourne and Travers and Sheena are seeking investors to bring Just Dance to movie theatres around the country.

When Dance Informa spoke to Travers, he talked about the fact that Australian dance films have been thin on the ground for many years now. He’s ready to bring dance back to the big screen, especially now that it isn’t on local TV anymore.

In Just Dance, the story follows a girl whose parents are very strict. They wish to see her become a lawyer, but she just wants to dance. The film follows her journey of self-discovery and Travers promises a twist in the story that will be surprising enough to enthrall even non-dancers!

If you are interested in being a part of the film, or becoming a supporter, contact Jessica Miller: 0401 212 691. For more information visit www.sheramaafilms.com.au (live soon). Stay tuned for the teaser trailer, coming soon!