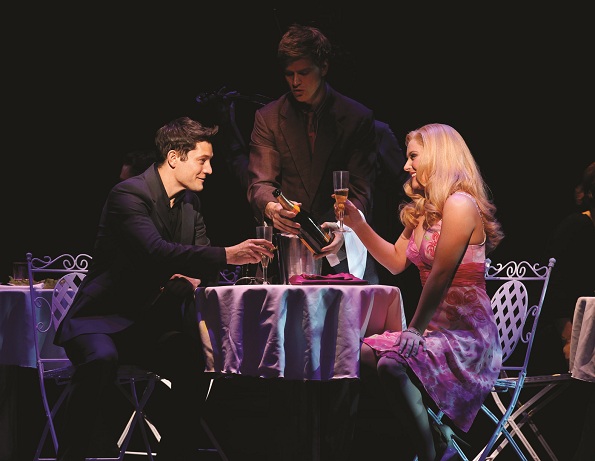 Omigod You Guys! Legally Blonde The Musical is straight-up good fun. It’s your ultimate romcom, with just the right amount of humour and wit.

Lucy Durack plays the role of Elle Woods perfectly; her comic timing is spot on. Portraying a spoilt and dizzy Blonde from Malibu, she also manages to capture great moments of vulnerability and plays the mantra of ‘don’t judge a book by its cover’ right down to a tee.

If you haven’t seen the original film featuring Hollywood star Reese Witherspoon, here’s the run down. Elle Woods, studying fashion merchandising at the University of California at Los Angeles gets dumped by her boyfriend Warner, who gets accepted into Harvard Law School and decides he needs a more serious girlfriend. Elle is determined to do whatever it takes to win him back, persuading the head of Harvard to let her in. Starring opposite Lucy Durack, is ladies favourite Rob Mills who uses his stellar vocals and charm to play cad Warner Huntington III. 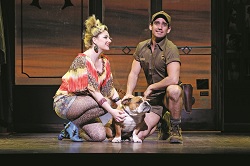 Helen Dallimore as Paulette and Mike Snell as Kyle in Legally Blonde. Photo by Jeff Busby

An actor who I think does not receive enough credit is David Harris in the role of Emmett Forest. Compelling, with great singing and acting skills, David is definitely one to look out for on the musical theatre scene.

We didn’t really get to see much of Cameron Daddo in his role as Professor Callahan, however he does have a comparatively modest role in the whole production.

Unlucky-in-love hairdresser and salon owner Paulette, played by Helen Dallimore, was a great inclusion in the musical. Her love interest, delivery boy Kyle, was a definite hit with the ladies in the crowd.

In her musical debut, model and entrepreneur Erika Heynatz got right into the role of fitness queen and murder suspect Brooke Wyndham. Singing “Whipped Into Shape” with a chorus of dancers, Heynatz looked phenomenal. Although a small role, her stage presence was definitely felt.

As expected, the show features a lot of pink, camp characters and sugary lines, but what’s most unexpected is how smart and witty the whole production is. U.S.-based choreographer and director Jerry Mitchell did a fine job in ensuring it wasn’t too cheesy and had just the right amount of tongue-in-cheek humour. It’s light, fun, fast and frothy.

Costumes were on the mark as well, but the definite showstopper would have to be Elle’s final number. What looked like a Swarovski studded pink dress garnered gasps and cheers from the crowd.

There were some terrific dance routines throughout the entire production. Elle was often surrounded by a supporting group of cheerleaders who would follow her journey from fashion to law student.

Legally Blonde The Musical is definitely a feel-good show. You can’t help leaving the auditorium with a huge smile plastered on your face. Receiving a standing ovation, it was obvious that the cast enjoyed delivering the performance as much as we enjoyed watching it.

Snaps for such a great show!

Top photo: Rob Mills as Warner and Lucy Durack as Elle in Legally Blonde the Musical. Photo by Jeff Busby.