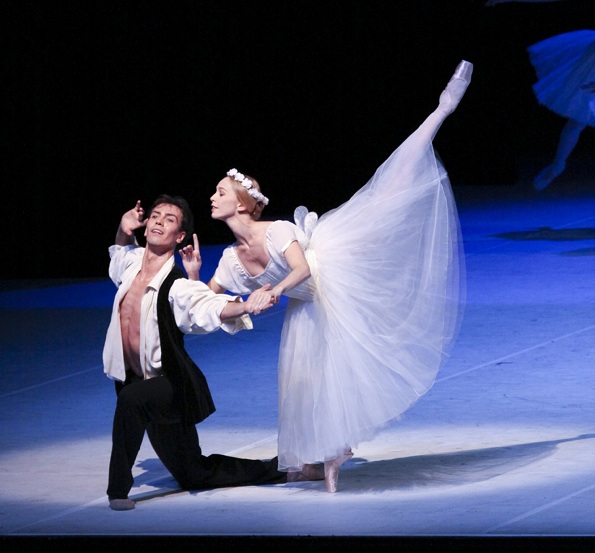 The Hamburg Ballet’s choreographer John Neumeier found it fitting that “the 40th season of my company begin with a tour to a new place, half-way around the globe, to communicate with a new audience the importance of Nijinsky.”

Nijinsky is Neumeier’s homage to the enigmatic and brilliant Russian dancer/choreographer Vaslav Nijinsky – ballet’s first international male superstar. Achingly beautiful and disarmingly emotional it has become one of the company’s signature works.

Neumeier paints a grand portrait, combining the intimacy of Nijinsky’s creative vision and memories with broad brushstrokes of world history, moving from the sparkling Belle Epoque to the darkness of World War I. The depth of this portrait combines the German willingness to express the rawness of human misery with an enticing quality of sensuality.

In two parts, the ballet opens as Nijinsky prepares for his final performance that he dubbed his “wedding with God”. Guests walk onto the stage – couples, individuals. We see the distinctive signature hat of Serge Diaghilev, we hear the guests speaking – it’s the Tower of Babel, Portuguese, Russian, Italian, Chinese, German…the diversity of the Hamburg Ballet Company foreshadows the sense of fragmentation and madness that will come.

Part I is a stream of consciousness where Nijinsky, imagining the appearance of Diaghilev, fills the stage with his past memories of family, relationships, his sensational career with the Ballet Russes and famous roles – the Harlequin, the Golden Slave in Schéhérazade and the Poet in Les Sylphides.

It also portrays his search for a new choreographic language and the ensuing artistic breakthroughs of L’Après-midi d’un faune, Jeux and Le Sacre du printemps.

In these dreamlike sequences Nijinksy the man is always present, simultaneously dancing with his various alter-egos, creating confusion in the audience’s mind as indeed for Nijinsky. Alexandre Riabko in the main role is intoxicating, his eyes seek the audience, conveying innocence, vulnerability, fear and madness.

Part II of the ballet immediately shifts to a somber and oppressive mood. The audience witnesses Nijinsky’s descent into madness as he sees the world around him going crazy – a brother in a straightjacket, Diaghilev with a new lover and protege, uniformed soldiers signaling the advent of the Great War.

Poignancy and oppression culminate with the appearance of Nijinsky’s Petrouchka, brilliantly portrayed by Lloyd Riggins. In Petrouchka we see Nijinksy himself, a vulnerable and misunderstood troubled soul who can only unleash a tragic, silent scream.

The cast of dancers who portray Nijinsky’s fevered memories are not only superb dance technicians but also charismatic actors who engage the audience with immediacy and raw emotion. They draw us into the ebb and flow of relationships – between Nijinsky and those in the world around him as well as Nijinsky with the troubled and sensitive inner world of the man himself.

The cast is impressively large and the sets are simple, but effective, relying strongly on Cubist primary colours and geometric shapes. Only the first and the last scene make use of a realistic villa-style intimate performance space. A stirring score of emotion-charged music from Chopin, Schumann, Rimsky-Korsakov and Shostakovich heightens the dramatic intensity – this is powerful stuff.

Neumeier combines the classical ballet tradition from which Nijinsky emerged and the modernist breakthroughs which he introduced. The broad spectrum of Nijinsky’s career is a juxtaposition of various moods and forms of dance: white ethereal visions from Les Sylphides; splashes of jewel colours and a gold-clad Nijinsky in Shéhérazade; the purity of Mariinsky Theatre ballerinas contrasting with the distinctly ‘camp’ and barely covered nymph from Spring and the uninhibited animalistic faune.

Neumeier’s Nijinsky is a living portrait capturing a man whose consciousness was a rich tapestry of memories, hallucinations, symbolic myths, hardened realities and emotional hardships.  This portrait continues to entrance audiences today as it did with Brisbane’s QPAC theatre, culminating in a rapturous standing ovation and no less than 5 curtain calls.