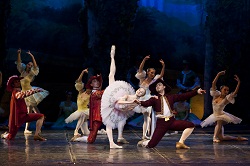 In Australia, the public is fortunate to have a youthful, dynamic national company in The Australian Ballet, but it is always a treat to see an international company perform on our stages. Presenting the classic Sleeping Beauty, The Imperial Russian Ballet rode into Melbourne on high expectations, showcasing their own flair and style.

The principal dancers were technically assured. Nariman Bekzhanov in particular stood out as a dynamic and exciting dancer and Radamaria Nazarenko-Duminica’s Princess Aurora was careful and steady. Several of the fairies looked nervous whilst performing their variations, but this was no doubt due in part to fatigue from the company’s tight rehearsal and performance schedule. The company is performing in 25 cities and towns across Australia!

The relatively small stage on which the company performed at Her Majesty’s Theatre noticeably restricted the dancers, particularly in passages of leaps and turns, making it difficult for the dancers to really let go and do justice to the choreography. However, there were magical glimpses of the performance the company might have given on a larger stage, particularly in the third act divertissements such as the Puss in Boots pas de deux, in which performers showcased their great chemistry and natural cheekiness, and the Little Red Riding Hood/Grey Wolf pas de deux, through which the dancers displayed great flair for the dramatic.