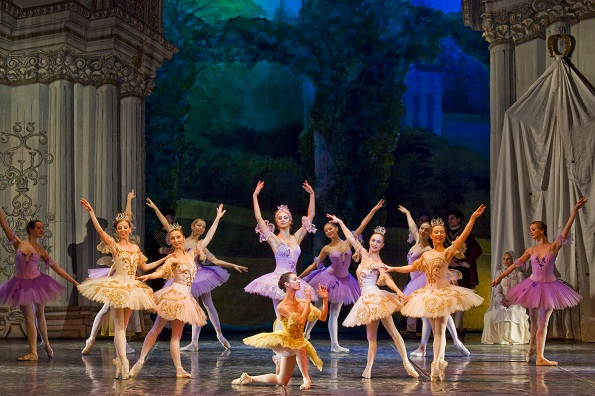 Some things endure, like fairy tales, the ballet and the Russian people. Throughout centuries of brutal Czarist and Soviet rule, numerous wars, regular famines and political upheavals, the Russians have turned to vodka and classical ballet as a solace and as a source of considerable national pride.

When the Imperial Russian Ballet Company returns to these shores to tour their full scale production of Sleeping Beauty all of that tradition and pride will be on display. Indeed, there is nothing more Russian than the ballet (vodka notwithstanding).

For the founder of the Imperial Russian Ballet, Gediminas Taranda, it comes as no surprise that his compatriots continue to be enamoured by classical ballet. Speaking from a sunny Moscow with the aid of his interpreter, Taranda says simply, “Classical ballet is part of our national tradition in Russia going back over two hundred years. Apart from that, Russian people love to dance and that’s why so many of them put their children into ballet school.”

Whereas in Australia we have sport, in Russia they have ballet. “The main reason is that for Russian people life never used to be very good,” Taranda expands. “There were very tough conditions and they used to go to the ballet in the evening to protect themselves from reality.”

So entrenched in the Russian psyche is the ballet, (think Bolshoi, Kirov, Pavlova, Nureyev, etc.), that despite its obviously aristocratic aesthetic, the former Soviet regime held it in the same regard as cinema and space travel. However, after the fall of the CCCP in 1991 and the liberalisation of the economy, life for Russia’s cossetted ballet community got a lot tougher.

“About eight or ten years ago it wasn’t a good time for the ballet,” recalls Gediminas Taranda, “but now it’s coming back and all around Russia, even in the smaller cities, audiences are returning. Most importantly in all of this is that the government has started to support the ballet again.”

Back in 1994 when Taranda stepped away from his career as a Bolshoi soloist to create the Imperial Russian Ballet Company he could have been excused for thinking that he had taken a huge risk. However, his tenacity, talent and extensive networks ensured that both his and IRBC’s star rose rapidly. The Sleeping Beauty tour will be the company’s fourth in this country.

“I am very impressed with Australian audiences,” Taranda declares. “There are lots of ballet lovers down there, which surprised me because usually it’s Europe and Russia that love ballet. It’s probably because of the Australian Ballet, who for the last fifty years have been a very famous company.”

This year those antipodean ballet fans will get to feast their senses on one of the genre’s defining classics, the Tchaikovsky scored, two hour plus spectacle that is Sleeping Beauty. Although the dance community is busy embracing contemporary and ‘street’ forms, the technical, narrative and musical traditions of classical ballet remain popular with audiences.

According to Taranda, “It’s the beauty of the story itself combined with the great music of Tchaikovsky; that’s the most important thing. It’s also very technical in the choreography and to be able to watch such a beautiful story in the ballet language is very spectacular. For us, it’s an honour to perform it, so for the people watching, they can see that, they can see our joy.”

Mounting grand scale productions is not only a technical and financial challenge but a huge physical work load for the dancers. With IRBC’s Sleeping Beauty clocking in at around 140 minutes, the cast need to be Olympic fit. As Taranda says, “First of all the dancers have to start in the ballet school for eight years of training, six hours a day. For this show the dancers rehearsed long, long hours; so if they can get through all that they are probably very strong and fit; like athletes.”

However, peak physical fitness is just one aspect of the dancers’ preparation. “The most important thing is to inject the dancers with the joy of the ballet, to make it enjoyable, to make the language of the ballet a part of them.”

In this, the 51 year old Gediminas Taranda is surely an example. When asked what keeps him fresh and inspired, he laughs heartily and responds in English. “In the morning, in the studio, it’s like a very good breakfast – and I love breakfast. Then in rehearsal it’s like drinking fantastic wine and afterwards, in the performance, it’s like a fantastic celebration for me. I live my life in the ballet, in celebration. I can’t understand how I could live without it.”

Get your tickets to Sleeping Beauty. Visit www.russianballet.com.au