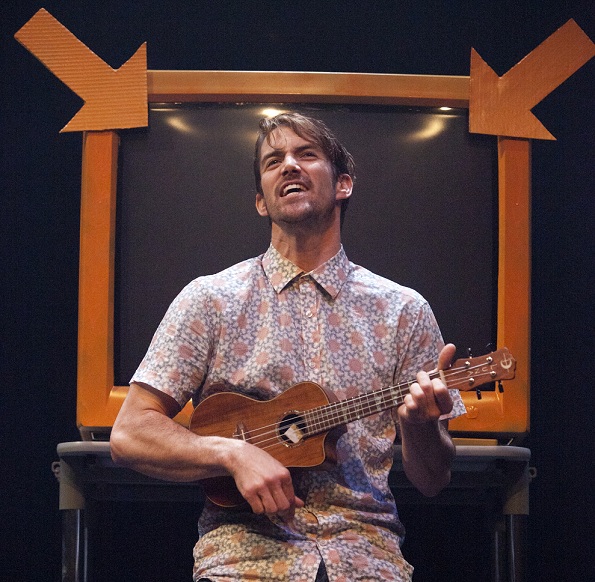 The iOU Dance Solo Series featured six home-grown solos by talented choreographers, each performing their own unique work showcasing their versatility as an artist. This solo series was originally created as a tribute to the Io Myers Studio at the University of NSW, where many independent artists research and develop their works. From the rehearsal room to the Opera House, Spring Dance curator, Rafael Bonachela, has given these vibrant artists an iconic platform to share their creativity and artistic spirit to a much wider audience.

The evening started with a fascinating performance of Anton’s SuperModern 2.1, an adaptation of his full length work, SuperModern – Dance of Distraction. Dressed in a plain t-shirt and sweat pants with his feet firmly planted on the ground, Anton’s structured improvisation of his upper body with hectic and repetitive. Shaking and twitching movements from his head to his fingertips seemed to demonstrate the unrest we can feel by the constant bombardment of technology in our lives. Strong and powerful lighting direction enhanced this work, with light streaming onto the stage to form a square box. This conveyed a sense of being trapped, and that Anton was energetically trying to break free. Anton’s choreography and execution was highly engaging, and I’m eager to see how it translates into his full length work.

Another highlight of the evening was the simplicity of Craig Bary’s modern choreography, and his ingenious use of a chair in his work titled Awaken Absence for Josh. Craig explored the notion of how you can still feel a presence when a space is empty, as if it should be occupied. A specially commissioned music piece by Eden Mulholland, provided the momentum for Craig’s swift movements. His interaction with the chair was as if this object was a person, and he used all parts of his body from his hands, legs and even his head and neck to glide the chair effortlessly around the stage. His strong yet fluid movement saw him playfully jump, turn, tumble and envelop himself around the chair. Craig’s strong sense of emotion in his performance allowed him to easily connect with the audience.

Martin Del Amo presented two short works. Part 1, Disorientation and Part 2, What Good Is Sitting Alone In Your Room, a tribute to the style of Bob Fosse. In his second work Martin unexpectedly appeared in a short black dress and stuck a series of poses and static movements that mimicked the characteristic silhouettes of Fosse’s choreography. This highly unique work by Martin paid homage to one of the greatest choreographers of our time that has influenced both cabaret and jazz dance.

Bringing a spiritual flavour to the evening was Narelle Benjamin’s piece titled Nobody, inspired by Hindu Goddess Kali. With the jingling sound of bells and use of a sword, Benjamin’s amazing flexibility and core strength allowed her to twist and shape her body into yoga inspired poses and headstands that marvelled the audience.

It was wonderful to see incredible women showcased in this solo series including Kristina Chan. In her work Lost and Found, Kristina sought to find her place in the world. With a strong sense of curiosity, her movement at times was reminiscent of an animal in the way she twisted her arms behind her, along with alert and sharp head movements. Although this work did not showcase fully Kristina’s amazing ability as a dancer, it did strongly deliver the message of being on a journey to discovery.

The last solo of the evening by Timothy Ohl, was a departure from dance in its purest form, to physical theatre. In this highly entertaining work, Timothy took on the persona of a reality TV star named Jack. Not taking himself too seriously he made fun of pop culture and the need for people to find fame. Essentially he is a ‘jack of all trades and master of none’. Competing to win a reality dance contest, Timothy showed his breadth of dance styles from tap to break dancing and even included a flash back to the era of 80s jazz dancing, complete with a sparkling blue unitard! He engaged the audience through his use of humour and cleverly incorporated technology into his work where he sang a duet on stage with himself on a TV screen. Even though this work pushed the boundaries of dance and entered the arena of physical theatre, the audience appreciated its relevance and gave it the greatest response.

With a varied and eclectic program, the iOU Dance Solo Series has successfully put independent dance theatre on the map for all to see, showcasing the diversity of talent within this dance community. Even in a world renowned venue like the Sydney Opera House, the artists couldn’t resist bringing a sense of local community to the theatre, inviting the audience after the show to join them in the Opera House foyer for a chat and a snag from the Aussie BBQ.