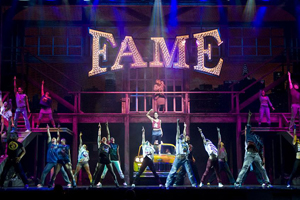 Fame: the musical is a fun and energetic romp full of big dreams and dashed hopes with a healthy dose of romance thrown in. If you are a fan of the film, you’ll love the musical.

Based on the movie released in 1980, Fame follows a group of high school students at New York’s esteemed High School of the Performing Arts. The musical focuses on several main characters: Carmen Diaz, a sexy Hispanic student and confident performer obsessed with fame; Schlomo Metzenbaum, the son of a famous violinist and himself a gifted flautist who is tired of the world’s expectations; Tyrone Jackson, a talented but illiterate hip hop dancer from a disadvantaged background; Iris Kelly, a graceful but socially insecure ballet dancer; Mabel Washington, an overweight dancer desperate to lose weight but who finds food irresistible; Serena Katz, a shy drama student, and Nick Piazza, a serious classical actor.

Opening with the energetic prologue Pray I make P.A, the relatively young principals make for a believable set of teenagers, fitting their characters like a glove. The remaining cast are evidently strong dancers with the ensemble dance scenes both polished and vibrant. 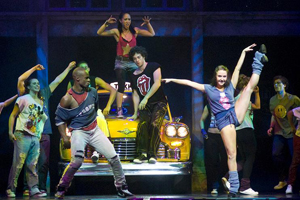 Perhaps one of the hardest things to get right in any musical is the casting of talent in the lead roles; in Fame, there is one crucial decision that needs to be made for each character: to cast a singer-who-dances, or a dancer-who-sings?

As singers-who-dance, American import Darlene Love (Miss Sherman) and Jazz Flowers (Mabel Washington) raise the calibre of the overall production. Love’s powerful gospel tones reach their pinnacle in the number These Are My Children, in which she palpably conveys her character’s misunderstood love for her students. Flowers gets her moment in Mabel’s Prayer, a hilarious plea to the powers above to stop her from becoming the world’s fattest dancer.  At points her vocal control and athleticism threaten to bring the house down.

On the other hand, the characters of Tyrone and Iris are given to dancers-who-sing, which is an understandable choice given that both roles require far more dancing than singing. Banking on the success of So You Think You Can Dance Australia, 2009 finalist Timomatic and winner Talia Fowler make their appearances together as the famous dance leads. The results, however, are somewhat mixed.

Timomatic’s strength, the hip hop sections of the musical, provide some of the most powerful, electric dance moments of the evening. This is partly because of the ensemble dancers’ tight performances. But Timomatic is also a soloist and in one scene, he is duplicated on several large screens positioned behind him as he busts out a series of dance moves, including the moonwalk in a show-stopping moment. Indeed his larger-than-life role more than makes up for the odd moment of insecurity in his vocal performances. As the demure Iris however, Fowler suffers more obviously from the disparity between her dancing and singing skills and ultimately, the pair were lacking the necessary chemistry as the famous love-hate couple.

But at the end of the day, there is no doubt that Fame will secure fans an entertaining night out, and is guaranteed to have you humming catchy tunes for days. Cheesy, fun, dynamic and voyeuristic, it bears all the hallmarks of a classic musical. What more could anyone ask for?