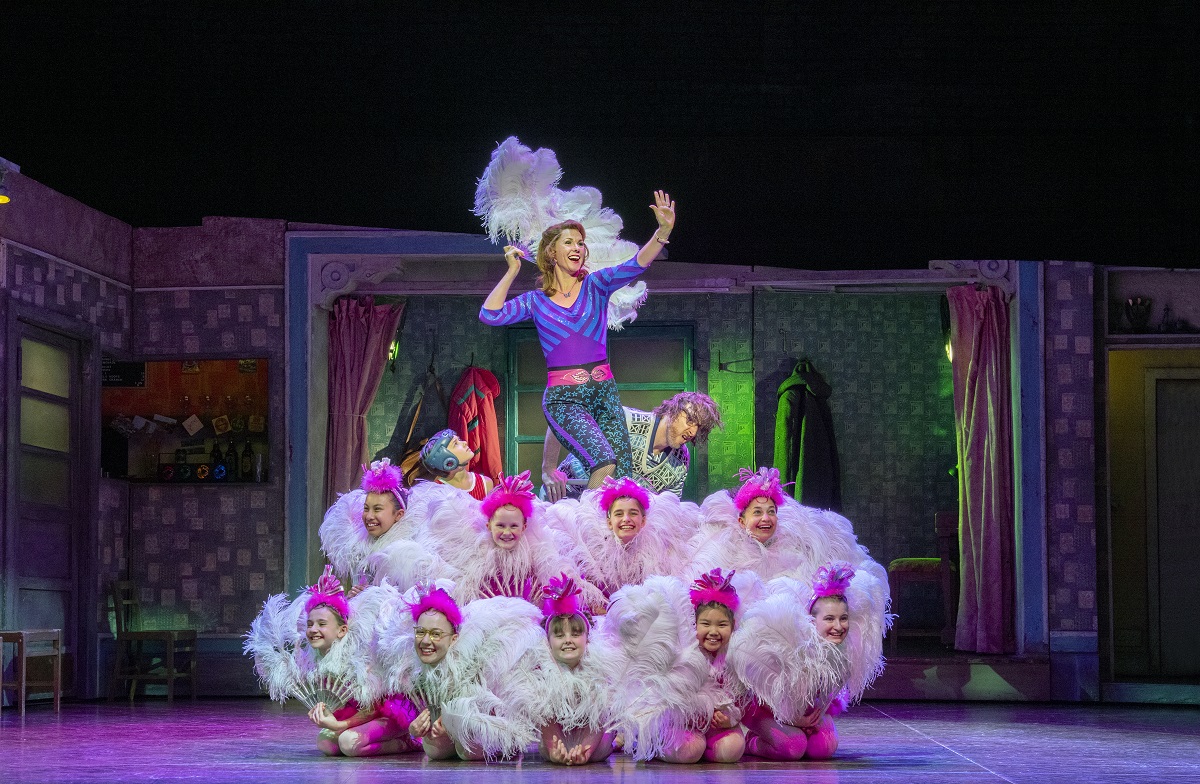 It’s a Thursday afternoon, and resident choreographer Danielle Bilios is at Sydney’s Lyric Theatre in rehearsal mode putting the Australian cast of Billy Elliot through their paces. It’s a role she’s easily transitioned into after starting her career as a dancer in the ensemble of major musical theatre shows, including Wicked, Fame and Matilda.

Securing the role of Dance Captain/Swing in Matilda was a turning point for Bilios in her transition from dancer to resident choreographer. “I had never dance captained or swung before Matilda,” she explains. ”It was my first introduction to the other side of a production. Straight after that, I did a small residency with Matilda in New Zealand, and then my first big show as Resident Choreographer was Mamma Mia! The Musical. I feel like it seamlessly happened, and I was very fortunate that the company offered me the role.”

Associate Choreographer Tom Hodgson provided Bilios the opportunity to join the creative cast of Billy Elliot, having worked with her on Matilda and Mamma Mia!, and she jumped at the chance to be part of this large-scale production.

With many facets and multiple casts, Bilios has the demanding task of looking after the shape of the choreography, ensuring the performers’ energy, passion and love for the show stays alive for the full season. From the swings and ensemble to the lead, any movement they do falls under her responsibility to ensure that every performance is consistent with what was set in the rehearsal room.

With the season underway, when the performers aren’t on stage, Bilios’ time is spent in rehearsals. “If it’s not a double show day, we will always rehearse two of the four boys (Billys) and maybe some covers underneath. It’s a big responsibility to play Billy Elliot, so myself and the resident team constantly try to help them improve and get the most out of their show. It’s an eight-show week from Wednesday to Sunday, and so we try and do as many cover calls and standby calls as well, so it’s quite a busy and full week.”

When Bilios is not backstage with the cast, she is in the audience scrutinising each performance. “I’m in the building every night, whether it is watching or rehearsing. I usually try and watch at least five out of the eight shows a week, because there are four boys, and I like to see one boy at least once do the show from top to tail, as well as seeing the ensemble and the principal cast to make sure it’s all running as smoothly as possible.”

When it comes to the choreography, Bilios is full of praise for Billy Elliot’s original choreographer. “Peter Darling’s choreography is really like no other. He is so inventive and can somehow make pedestrian movement into such a creative dance. For me, it’s sharp, it’s intense, it’s quick, but it’s so very clear and completely about the storytelling of the show. I think that’s what is so important about his choreography, that it’s never just movement. I really love ‘Shadow Dance’, which some people may not know happens. It’s where Billy has just been catapulted into a ballet class that he wasn’t prepared for, and he ends up out in the street under a streetlamp, and he finds his shadow in the light. It really is the first moment in the show that we introduce the audience to Billy finding shape and movement and him understanding how far his body can stretch and what kind of shape he can make in that shadow. I love that part in the show because I feel it really sets up his love for dance and his creativity that catapults him for the rest of the show. And of course, there are the big numbers like ‘Solidarity’, ‘Angry Dance’ and ‘Electricity’, which you can’t help but love because they are complete showstoppers.”

Darling’s choreography spans a variety of different dance styles, which stretches the capability of the performers. “The boys on their own do a lot of ballet, tap, and they do a fair amount of street funk and commercial style dance,” Bilios says. “I think there really is not a style of dance that is missed from this show. The adult ensemble really push through and do more grounded, earthy, realistic movement, but then at the finale, they have to whip out four minutes of tap, so it really will give you everything you want to see in a show. To have a 11-12-year-old boy perform all those styles is pretty amazing.”

Bilios has a great connection with the kids who take on the role of Billy Elliot (Omar Abiad, River Mardesic, Wade Neilsen and Jamie Rogers). “They are all different from one another, and that’s definitely what we celebrate. They all came to us with slightly different skills, but they all had a certain something that was exciting about them, which is what makes up Billy Elliot.”

Bilios explains that the boys went through a number of rounds before the final four were chosen. “We had a group of boys who went into training and did ballet, tap and acro classes before we even finished the final rounds,” she recalls. “Once we finished the final rounds and the boys were cast, that’s when we went into more consistent training in their home cities with teachers who were working with the show so they had a little bit of a head start before they got into the rehearsal room. Once they get into the rehearsal room, that’s when it becomes the pedal to the metal, and you really start to see them grow quicker. They’re in front of you every day, and they start to do actual work from the show and improve at such a quick rate. Once they’re in the show, they still do their ballet and acro classes each week, as well as rehearsals and the show. I love their drive, creativity and passion for what they do. It’s outstanding to see how hard 11-, 12- and 13-year-olds work and how much they can self-motivate and understand the ins and outs of a show and what they need to do to get that show across. I think it’s been pretty unbelievable to see how much they have achieved in a short time.”

When reflecting on the kids in the cast, including the boys who play Michael and the ballet girls, Bilios loves seeing the show through the eyes of a kid. “Seeing kids rise to the occasion and taking on every little bit of what this show entails is awesome,” she says. “You can never underestimate a child and their goals, passion and dreams because they just love it, and it’s awesome for us to watch that, too, because they have no limit, and they keep growing and improving.”

Bilios recalls a special moment recently, seeing the reaction on the faces of all four Billys when Elton John, who composed the music for the show, paid them an unexpected visit. “Elton was watching, and Omar didn’t know that Elton was in the audience until we finished up,” Bilios says. “Elton ended up coming on stage and being part of the company bow and surprising the Billy who was on that night. He’s doing such a massive tour around the world, and it was just really special for the company to have him join everyone on stage for the bow. It was awesome. They were blown away and never expected to meet someone who was so heavily involved in the show from the beginning.”

It’s clear that Bilios is enjoying being part of the creative team of Billy Elliot, and all her hard work has paid off. “I think if you find yourself wanting to transition to a more creative role, you have to take on every aspect of what that role entails. It’s just as much a managerial role as it is a creative role. You will take on many things that you have never done before, including scheduling the show and making sure everyone is in the right spot at the right time, all the covers know what they are doing, all the swings know what they are doing. If you have that eye for detail and that love for what makes up a show, then just go for it.”

Billy Elliot The Musical is currently showing in Adelaide, and will be showing at the Melbourne Regent Theatre from February 2020. For more details, visit billyelliotthemusical.com.au.