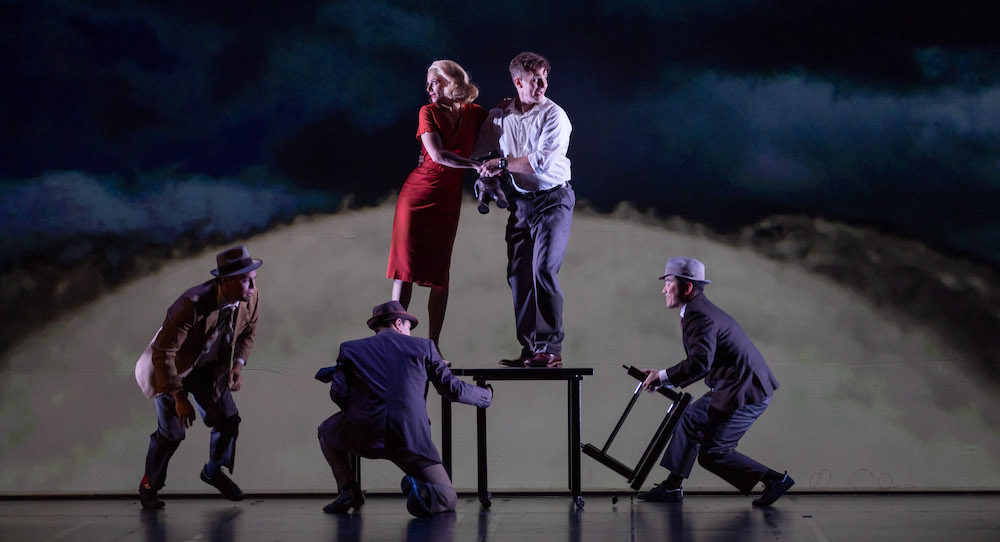 North by Northwest is a delightful stage version of an Alfred Hitchcock classic. The 1959 American spy thriller film was a massive hit, Hitchcock calling it one of his best, and it is often referred to as one of the best films of all time. Hitchcock fans will not be disappointed with this wonderful adaption by Carolyn Burns. It has all the suspense and surprise told in the humorous and dramatic fashion of the cult classic.  It is a wonderful flashback to a by-gone era of charm and Hollywood classic glamour alongside a tantalising-to-the-end mystery.

The plot is based around the mistaken identity of advertising executive Roger O. Thornhill, who is framed as being a murderer named George Kaplan, on one side running from the law as he tries to clear his name, on the other interfering with the objective of the villain, Phillip Van Damm, who is selling national secrets in microfilm. In classic Hitchcock style, the contents of the microfilm are never revealed, and the details about why the villains care about who Kaplan is remains somewhat a mystery, with the excitement of the chase being the main feature of the film. Thornhill’s desperate attempt to clear his name is loaded with car chases, train chases, and the famous scene where a crop duster nearly takes him out after being falsely lead to the ill-fated location by way of femme-fatale Eve Kendall, played by Amber McMahon, catching the bus headed north by northwest to a remote location. All of Thornhill’s fast and furious tripping from one disaster to another, culminate in a final, dramatic chase on Mt. Rushmore, right under the noses of the stone carved Presidents. Perhaps a comment on the current political climate of the day, perhaps a comment on the nature of the mysterious Kaplan. Everything about this play is witty, cleverly drawing on the era, but timeless in its ability to entertain a current audience.

Brilliantly directed by Simon Phillips, multiple roles are given to each actor apart from the lead (David Campbell as Roger O. Thornhill), bringing out their versatility and skill, with an all-star cast including Bert La Bonté as Phillip Van Damm and others, and Genevieve Lemon as Mrs. Dinah Thornhill and others. Campbell was absolutely wonderful as the charming but perplexed and desperate Thornhill, with an ability to play the 1950s leading man with all the physicality, larger than life personality and timing with finesse. It was an absolute treat to witness the genius that is Sharon Millerchip playing Maggie/Mrs Townsend and a host of characters, showcasing her highly acclaimed versatility in a subtle and highly nuanced manner. Tony Llewellyn-Jones was charming as The Professor (and others), and it was heart-warming to witness a lead of his lengthy career, still going strong and shining brightly. The physicality of the cast in the way they traverse the stage, interact and embody the era is fascinating, with detail found in their posture, blocking, and timing that adds to the believability and subtleties of the play.

The scenery is modified by the actors throughout, using projections onto the cyclorama as the main form of scene change, with a few versatile set pieces here and there. The projection was itself a major player, with cameras set up either side of stage edge, where actors were placed the to-scale set pieces and manipulating them for the projection onto the cyc., which had a 1950s style filter. The earlier way of making a scene in a film in front of a green screen involved the same kind of set manoeuvring. CGI didn’t exist in Hitchcock’s day, and therefore bringing this element into the play, set the atmosphere for the genre. It was delightful to see this incorporated into the play as if it were an actor in its own right, full of life and personality. These manipulations of the scenery is where the choreography gets interesting, as the actors embody the scenery with perfect timing playing a critical role here, bringing vitality to the entire space. A highlight was the four Presidents’ faces, being four of the actors’ faces, projected onto the cyc., and the crop duster plane, a tiny model in real life, but a life-threatening danger to Thornhill on the stage. The projection was a fantastic element that added humour and life to the work as a whole.

Costumes designed by Esther Marie Hayes, stylistically stand out in a classic, timeless, sleek and sophisticated manner that represent the film and genre to a tea. The worn-out grey suit that Thornhill wears the entire play, changed men’s fashion in its day. Influencing not only the fashion industry, but many creative endeavours in its wake. Mad Men-esque in its vibe, North by Northwest oozes cool.

This classic stage adaption of a cult Hitchcock film should not be missed. It is an education in and of itself in not only this fascinating era in the timeline of show business, but in one of the foremost storytellers and influencers of the mid-20th century. A brilliant play that entertains from start to finish, don’t miss North by Northwest, now showing at the Lyric.