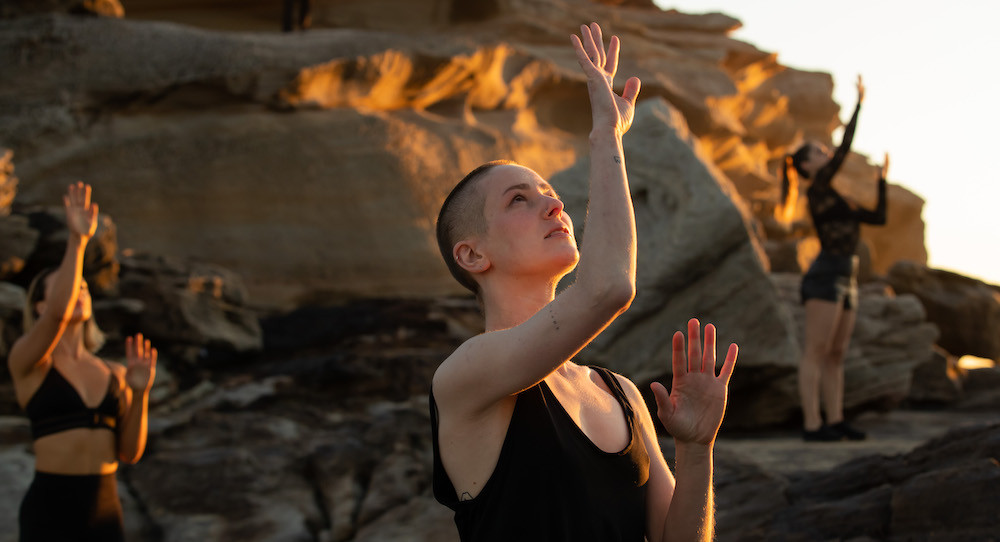 Dance Informa chatted with 2020 New Breed choreographers Jesse Scales, a Sydney Dance Company dancer, and Raghav Handa, an independent Sydney dancer who has found the current climate for independent dancers difficult to navigate and was over the moon to be chosen as one of the New Breed.

This is not Scales’s first time to create a piece for New Breed. She first presented a piece in 2016, entitled What You See. But what was the most frustrating part of the process this year for Scales?

“Initially, I thought, ‘How can I do this with everybody elsewhere? We’re not together; how do we create something that is cohesive?’ she says. “But the dancers were fantastic. We used Zoom, did a lot of texting, a lot of talking and, yeah, I think that has worked brilliantly for what we needed.”

For Scales, trying to develop her piece was difficult, as she had started work on it this past March and April, and then lockdown came and it was hard showing movement via Zoom. “The other issue was probably having to use Zoom and not being able to work in the studio together and also being mindful that the dancers on stage will need to follow social distancing rules,” she adds.

With 11 dancers in Scales’s piece, it was particularly difficult to get through the work. Scales initially showed the dancers her application for New Breed so they understood what they would be trying to achieve, but dancers trying to dance in their bedrooms watching Zoom isn’t ideal, so they’re all very happy to be back in the studio and working face to face.

We asked Scales about the inspiration behind her 2020 work for New Breed.

“My piece is called ​Inertia,” she explains, “and I’m relating it to the bystander effect and how, with a group of people, what sort of force would you need in order to become an active bystander and go and help someone? I’m realising more and more that this is so fitting for the world that we’re in.”

She continues, “I first started on this idea when I became the subject of inertia at Town Hall station. I can remember overheating; I felt the train coming with the breeze. The next minute, I woke up, and I was on the ground. The train was there. The doors were open. And I had fainted. And no one batted an eyelid. It was a packed platform.”

Scales says that after her first New Breed creation in 2016, she has since been itching to get another chance to try out her choreographic skills.

“I just kept applying and re-applying, because it is such an amazing opportunity to work with this company,” she shares. “And I think my first piece, What You See, led me to Inertia.”

Scales will be using an orchestral cinematic soundtrack, “Let My Key Be C”. “As a choreographer, I’m really interested in the many layers of what choreography is,” she says. “So for ​Inertia,​ I have two sound tracks. One is by Johann Johannsson which is called ‘The Rocket Builder’. And the second one is ‘Let My Key be C’ by Nils Frahm and Anne Muller. I just really enjoy those pieces of music. They’re quiet and orchestral and cinematic.”

With only 10 minutes for the performance, Scales likes to work with a dystopian view on the world “because it’s a great way to draw audiences in in a short amount of time, and the cinematic soundtrack adds to the feeling of being completely drawn into what’s happening on stage.”

Handa has just started on his work, having been in the studio for only a few days. What does this opportunity mean for him as an independent dancer and choreographer and his challenges?

“Let me just say straight up how luxurious this opportunity is, and how rare this is for independent choreographers and performers in the current landscape to have an ensemble of eight amazing, amazing technicians to be just given to you with the opportunity to ‘just have a play with them,’” he says.

Of his motivation or inspiration for his work, he says, “It’s a strand of an idea, and I’ve been thinking about it a lot – the idea of ecology now, where we are now, as well as where we have been, so drawing comparisons.”

Handa adds, “You know, we all go through these things as humans – COVID, for example — and we can’t help but reflect on the past. So, for me, it was more or less thinking along the lines of hundred years back and reflecting on how much the world actually has changed. Then, that idea made me think about my own self and my family and how we do things now and the way things happened in the last 50 years, and prior to that, even 2,000 years ago and where they are now. So to draw an anchor for you, it’s about the use of the swastika.”

Handa’s family culture incorporates the use of the swastika almost on a daily basis. “In our family, we draw it in front of our house, particularly during Diwali time, the Hindu festival, and Indian festival. Every time we start a prayer, my mum would be there drawing things. It’s part of our culture; that’s what you do. But, of course the swastika symbol comes with a weighted inflated significance. So if I use that as a base and I think of what the swastika is, or was, or has been, then for some people, it’s a visualisation of power. It visualises and expresses the cult that people can get into. But it is just a sign; and if you take that power away from it, it is just a sign. And by giving it power, we imbue it with such force that it has the potential to do great harm. Yet if it becomes something that is the duality of it, that is actually meant for something, that’s completely the opposite.”

He adds, “So the question remains: do you still keep using it to be part of your family and part of your own tradition and your own mythology? Or do you let it go? And the question then becomes, ‘How can you actually de-weaponise the imagery?’ I would love to keep using the imagery, but without any judgment from myself or from anyone else. I’m under no illusion that I’m being provocative, but I’ve got to start somewhere. And this is just me at the beginning of this, and this provocation idea might turn into a bigger work. But that’s okay.”

For music, Handa has chosen a score designed by Sydney-based composer James Brown, as well as a tabla drummer who will create a few rhythms. And Handa says he might incorporate some wording to go with the rhythm, which is important in his tradition.

“I’m trying to give the symbol a language, a sonic language of ​swastika,” he explains​. “So right now, we are playing with this new language. It will be a physical language with what it means to me, inspired by my family’s texts and my mother’s information. Everything that has happened, and what was said, she has passed the knowledge on to me. And the score will provide it with a sonic language.”