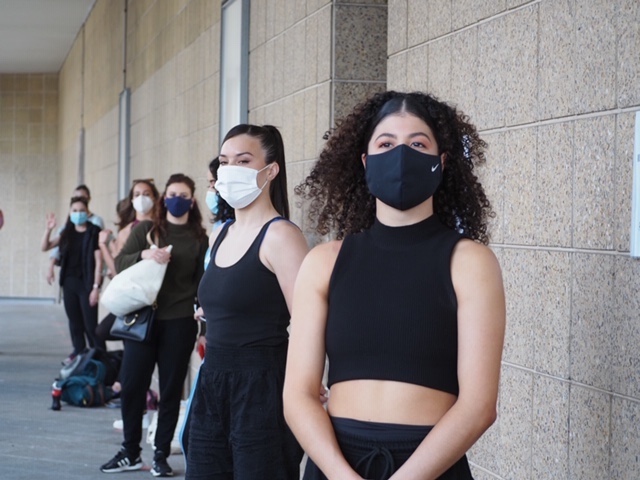 Looking at the girls who had been in the callback for PIPPIN, patiently waiting on the outdoor balcony of The Star, they were all wearing a mixture of different requisite masks, having had their temperatures checked and keeping a measured 1.5 metre distance from one another. There was no doubt that this was no usual audition. Why? Due to COVID-19 with a number of stringent requirements.

Dance Informa had the opportunity to talk to both the choreographer, Mitchell Woodcock, and Ian Phipps from IP Publicity, as well as watching the rehearsals as Woodcock took the girls through the choreography.

Why PIPPIN and why now? Phipps explains, “Firstly, the [Sydney Lyric] Theatre was available, and the owner was looking for a production that would bring in an audience. PIPPIN had just finished in the US, and the owner had literally bought all the costumes for the show.

So they had the costumes and the choreographer, who himself had just come off the show on Broadway. And the owner of The Star wanted to stage a production, rather than having an empty theatre with no patrons.

So why is this show a good production for the current climate?

“PIPPIN has a lot of joyful elements, and it takes us into a fantasy world where we can escape for a while, which seemed to be just right for the times,” Woodcock says. “You know, getting out and just enjoying the spectacle of a show. Being cast out of Sydney was also one of the main reasons we could mount the show because usually we would travel the country doing auditions, but this production is Sydney-based.”

But of course, given COVID-19 and its constraints, there were going to be differences with the auditions for the show.

“The main problem with COVID-19 is maintaining social distancing in a theatre,” Phipps says. “What we have done is to ensure that everyone will go in one direction. No one will be able to go back over their own tracks. So in relation to the auditions, the girls have their own space to warm up, with chairs at the appropriate distance from one another, and once they have finished, they will move to the stage where Mitchell will take them through their paces with the final part of the choreography. After which, if they’re called to do their singing audition, they will go to yet another space.”

He adds, “And when the patrons come into the theatre, it will be based on the same strategy – with patrons coming in via one door, leaving by another, and on no occasion will there be the opportunity to retrace your steps. It has been shown that going back over your tracks can create a potential COVID issue.”

Watching Woodcock in rehearsal is a delight. He is patient and gives individual feedback. Firstly, the women learn the choreography in their soft shoes before having to put on their heels, which they’ll need to dance in once they’re on stage.

We spoke to some dancers during a break in the auditions. “How do you feel?”, we ask one female dancer, who responds with, “I’m always a bit nervous, but that’s part of the process, and it’s exciting as well.”

“How do you think it’s going?”, we ask another hopeful dancer at the end of the rehearsal. She replies, “Mitchell is great, and he gives individual feedback which is unusual.”

Then the numbers were read out as to who would go through to the last part of the audition, which was the singing, and one of the girls we spoke to was on the list, so she headed upstairs somewhere to hopefully get through this last stage.

PIPPIN will run at the Sydney Lyric Theatre at The Star from 24 November. For tickets and more information, visit pippinthemusical.com.au.