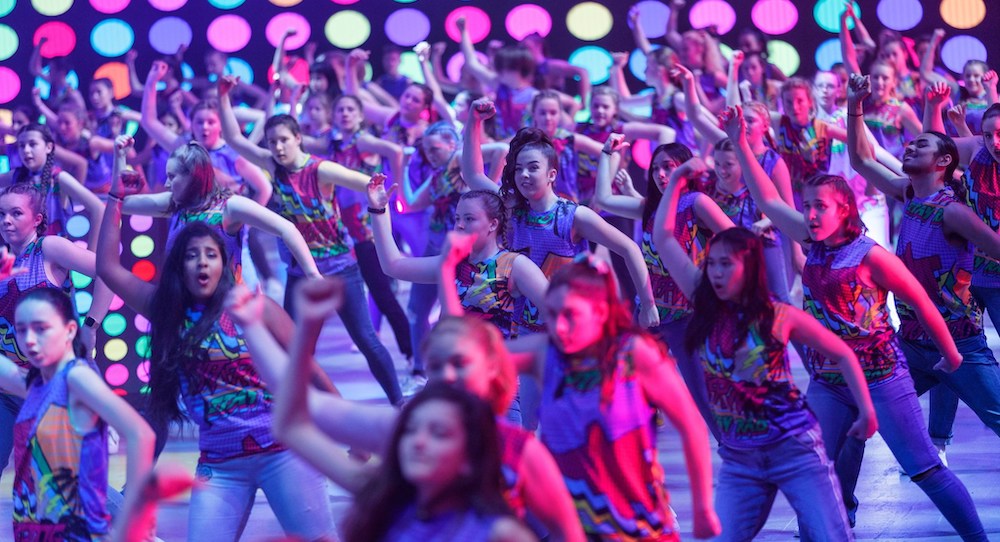 The 2020 Victorian State Schools Spectacular was due to be performed twice on Saturday 12 September at John Cain Arena. Instead of bumping in and out of the arena, makeshift film studios have been bumped into the homes of main cast members across the state to produce a made-for-TV special which will be broadcast by the Seven Network later this year.

While the live arena event cannot proceed, this year’s modified, alternative performance outcome has inspired more than 2,000 students to put in much effort during a time of upheaval in their life. This year’s Spectacular features performances reflecting themes of resilience, rising up and the art of connection.

Victorian State Schools Spectacular students have dedicated countless hours across many months involving approximately 2,000 Zoom sessions since April preparing for this show. Persistence, dedication and determination have been the overwhelming traits these students have exhibited in 2020. The year has been like no other, and they have maintained engagement and passion throughout difficult times. Supported by a dedicated team of people striving to give them a whole new perspective on how they can reach audiences through the art of performance, this has truly been a once-in-a-lifetime opportunity for them.

“Spectaculars come in many shapes and sizes!” said Creative Director Neill Gladwin. “By moving the production into the virtual and made-for-TV space, the Spectacular ventures into a new arena. Effectively making 14 music videos all with different styles and themes, the songs capture the spirit of the cast who decided not to give up but to give into the delight of music, song and dance in the pandemic’s lockdown days. From hip hop to soul, from Vanessa Amorosi to Beethoven. (Yes, it’s the 250th anniversary of Beethoven’s Ode to Joy, and this is performed by the Mass Choir and the VSS Choir.)”

Gladwin continued, “Great songs of resilience from Emilie Sande, Aloe Blacc, Stevie Wonder, Goanna and John Farnham carry the show. Featured artists include the Victorian State Schools Pasifika Choir, the VSS Mass Choir and the Victorian State Schools Choir — now all performing as virtual choirs, headed up by the stunning talents of the principal vocalists, dancers and orchestra. This Spectacular delights in the expression of hope, light and life seen in the eyes of all of its young participants.”

Parents and siblings have become crew members – helping performers to set up a TV camera, lights, microphone, laptop and large green screen in their sheds or lounge rooms. Several film kits rotated through the homes of the principal vocalists and dancers, with detailed cleaning between each delivery. Production team members connected virtually to the students at their scheduled times from all their remote locations for various sessions including wardrobe, lighting, sound and stage management training before they then recorded their performances – as if they were all together in a TV studio.

The dance team alone has run over 50 sessions in three weeks via Zoom and Webex to teach all the students new choreography that had to be totally revamped from performing in an arena with massive floor space and to three sides of an audience, to what can be danced in a contained space in front of a green screen, in front of a fixed, unmoving camera.

The members of the orchestra, backing vocalists and members of the Victorian State Schools Choir also worked through countless online rehearsal and recording sessions adapting to the new format with students making DIY sound booths out of their wardrobe, blankets, cushions and boxes. The production team virtually recorded each of them individually before mixing and mastering tracks to accompany the visuals.

“This year has been a true testament to the transformative power of music and music education,” said Musical Director Chong Lim AM. “I am truly inspired by the resilience, determination, talent and commitment to the project shown by each and every one of our music performers this year. They have bravely chosen to overcome their personal fears and uncertainties during this lockdown period to rise above the occasion and deliver stunning performances. I am so proud of them for adapting to the online tutorials and recording processes we have specially designed and introduced to them and have emerged with flying colours and a new set of skills as well! They have all done so with cheerfulness, enthusiasm and a hunger to perform to the best of their abilities with grit and determination. I can’t wait for the rest of Australia to hear and see their superb performances in the virtual concert we have collectively made.”

In addition to that, students from 83 state schools across Victoria forming the mass choir and mass dance ensembles are recording their performances to numerous songs on their mobile phones, laptops or e-pads. These are uploaded for processing by the technical team for inclusion into the numbers. This includes audio and vision splicing work for each student, for each song, to bring together voices, faces, and dance moves into magical backdrops for the TV broadcast.

Since its inception in 1995, the Victorian State Schools Spectacular has been helping students to get training and mentoring as singers, musicians, dancers and specialty performers. The Spectacular supports the Education State targets of more students reaching the highest level of achievement in the arts; ensuring kids are happy, healthy and resilient; and building pride in their schools. It also provides students an invaluable performing arts opportunity, encouraging development of their creative skills, discipline, perseverance and confidence over months of rehearsals. The environment is non-competitive, allowing students to learn from one another as much as from the mentors. Lifelong friendships are often made on this incredible journey.