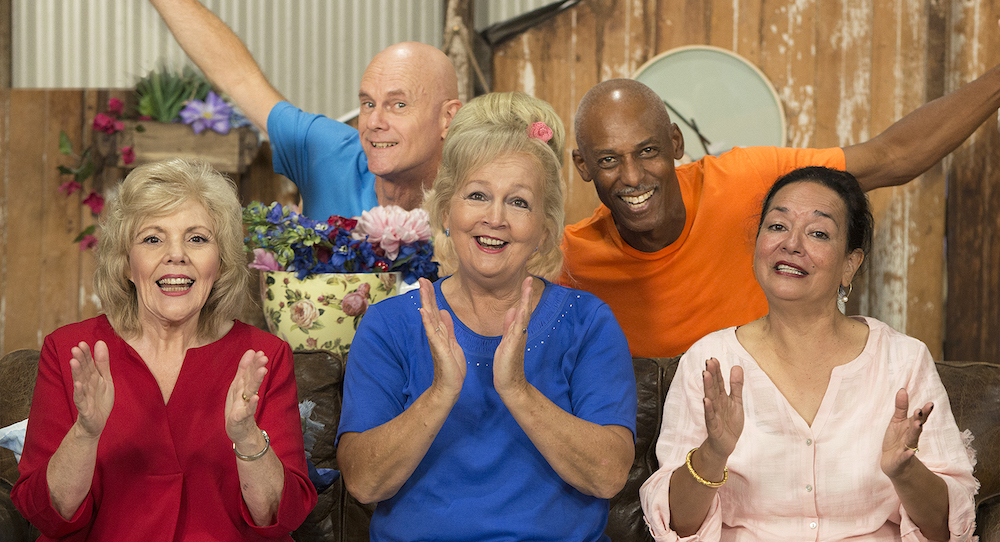 ABC Kids newest sensation for pre-schoolers are grandparents! The Nannas and The Poppas are five real-life grandparents who will have young children everywhere moving, grooving and bopping to some very catchy beats. The series launched on ABC Kids on Sunday 25 October, which also happens to be National Grandparents Day.

The Nannas and The Poppas was initially created by pre-school entertainment whiz Maree Kirkland-Morris when she could see a gap in current programming for young kids. With so many children being minded and entertained in their homes by grandparents, it seemed a no-brainer to her that grandparents should also be entertaining kids on their screens. “With so many parents needing to work, grandparents have become integral to how families function day-to-day,” Kirkland-Morris said. “Not only are they providing child-care, they are also an important link in helping young kids understand their heritage and learning fun things like how to fish, cook a cupcake and, most importantly, pop your cheeks!”

Sharing this vision, partner Lyndi Adler has worked closely and tirelessly with Kirkland-Morris over the last year to bring this concept to life. “When Maree first approached me about The Nannas and The Poppas some 18 months ago, it immediately resonated with me,” Adler recalled. “Not only did I love the concept from the get-go and recognise that it was an obvious gap in children’s entertainment, I also knew that I needed to become integrally involved in its development.”

Music legend John Field, who has written more than 450 mega-hits for The Wiggles, was totally smitten by the concept from the get-go and leapt at the opportunity to write and music direct all the songs. “I couldn’t believe someone hadn’t done this before!” he said. “The kids are going to love the grandparent’s silliness and warmth.”

All of the cast have worked as entertainers for many years, and they have relished the opportunity to bring their talents as vocalists, dancers and comedians to a kid’s audience.

As grandparents themselves, they each bring an interesting perspective. Poppas Tony and Calvin are experts as being long-distance grandparents – Tony’s grandson Max lives in Austria and Calvin’s granddaughter in the U.S. Nanna Maggie enjoys a close relationship with her step-grandchildren, and Nanna’s Kokil and Patti are both enjoying watching their grandkids blossom and bloom into little individuals. Their backgrounds as grandparents have helped their Facebook site, The Grandparents Club, grow to a following of more than 50,000 in less than six months!

The Nannas and The Poppas is a music series that not only reflects the incredibly important relationship between grandparent and grandchild, but it also provides real engagement and relatability for pre-schoolers, their parents and, of course, Nan and Pop.