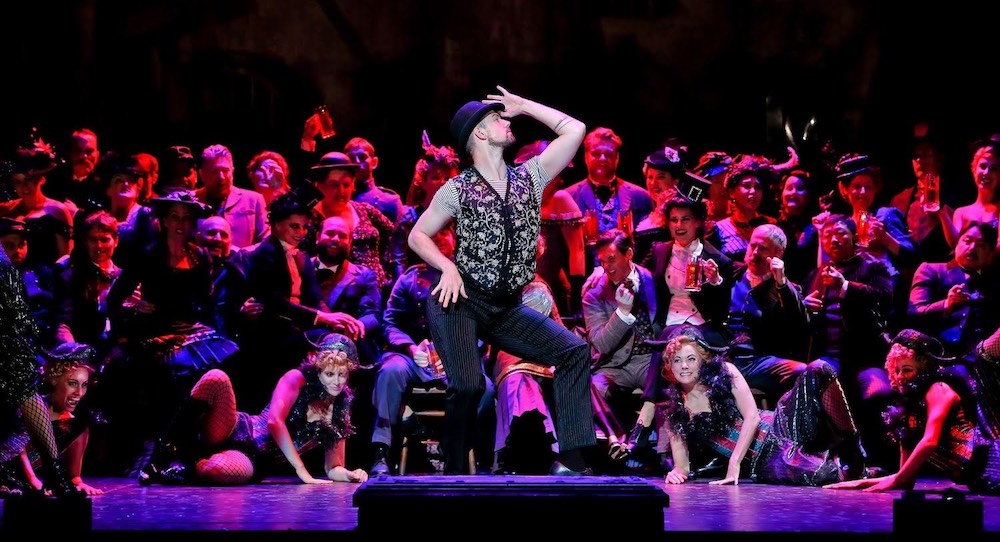 Melbourne dancer Tyrone Anthony is back in Australia. After an exhilarating few years at the lavish Moulin Rouge in Paris, Anthony has just starred as the principal male dancer in Faust by Opera Australia in Melbourne and Sydney. Although theatres are now closed during this crisis, Anthony won’t be away from the bright lights for long, with his eyes now set on a career in the States once the world can return to normal. Here, Anthony speaks with Dance Informa about his jam-packed career so far and his exciting plans for the future.

What was your big break?

“I graduated from Spectrum Dance and went straight into Disney Live’s Three Classic Fairy Tales, playing the role of Gaston in Beauty and the Beast. It was incredible, especially coming from someone who was so dance-driven to then going into a more acting/singing role. It was interesting to look back and see that my training helped me with that a lot.”

When did you transition into cruise ship work?

“We did Southeast Asia for nine months, and then we did two months in Australia, which was amazing. A couple of weeks after I finished, I auditioned for Royal Caribbean, and two months after the audition, I booked my first ship which was Mariner of the Seas. I got the principal jive role on the show Center Stage. I got booked as the lead Latin and jive performer. During that contract, I got offered my next contract. So, I was home for six weeks, and then I went back to Miami and jumped on the Quantum of the Seas. It was a very quick turnaround at home to see my family and have a good rest. Then, I was straight back to work.”

Tell us about your time with the Moulin Rouge?

“Halfway through the contract with Quantum of the Seas, I came home to audition for Moulin Rouge, and then, by the time I finished my contract I had booked Moulin Rouge. So, I moved my life over to Paris, and then three weeks into the rehearsal period, I got asked to do Can Can Solo. I did Can Can Solo and was an onstage swing for just under two years. I was so lucky, I did the the Can Can Solo for their 130th birthday celebration! That show was incredible!”

Did you enjoy living in Europe?

So what are your plans for the United States?

“I was lucky because I met up with a connection that I made on my second ship. His name is Doug Johnson, and he runs E-Plus Entertainment in the States. He was the person who came up with our show on the ship. He is now sponsoring me to come over to America. E-Plus Entertainment runs one of the biggest production companies out of LA and Vegas. They do shows like the Grammys and the NFL, and about three different casinos through Vegas.

I was honoured to receive this message from Doug Johnson recently: ‘We are delighted that you will be making your way to Los Angeles to pursue working in the entertainment industry! You won’t have any problem working in our town, especially with your gifts and talent. We truly enjoyed working with you overseas and appreciate your professionalism and exceptional talent. We would absolutely love to have you onboard the E-Plus team as a principal dancer in upcoming events and productions.'”

So what areas of the industry would you like to pursue in LA?

“I would love to work with an artist and go on tour. I’d love to do something so foreign to me, like live on a tour bus and go from city to city and just dance for tens of thousands of people every night who are just loving what you are producing with the artist! I also love creating that relationship, that family, with the cast that I meet. And I think the scale of things on a tour is amazing. They put so much money and so much production into it that it’s a great opportunity for me to really take a hold of.

I’d also love to do TV and award shows. America has such a great vision on how to shoot dance for TV. If I could learn that side of things, it would be mind-blowing. Hopefully, I can learn as much as I can. I would love eventually to transfer into creative, choreography and direction. I feel like that’s a really natural progression and a really cool step.”

“I don’t like to sit around or stop for too long. I get really itchy, and I just need to keep moving. I don’t love wasting time. Our life as a dancer is not just to sit around and wait for something to happen. You’ve got to pick it up. I just want to keep dancing, working, performing and getting out there.”

You’ve been so blessed to keep working and having so much career success. What’s your secret?

“I like to pride myself on cleanliness and on the fact that I can hit a clean line.

When I started training, I was at the Victorian College of the Arts in Melbourne, so my ballet training was strong. When I transferred over to the commercial world, the lines and the clarity that I have from ballet really, really helped me. But other than that, I think the versatility from training every style has been important. These days you can’t just be a jazz dancer or a hip hop dancer. I don’t feel, personally, like that’s a thing. Honestly, if you’re a dancer, you’re a dancer. Period. You can do Latin. You can do jazz. You can do tap. You can sing. You can act. You need to have all of that in your little tool belt so that if the job comes up, you can be ready to go.”

Due to the current COVID-19 climate, Victorian Dance Festival (VDF) has been postponed until October. But I heard that you have been selected to assist contemporary dance legend Desmond Richardson, from New York, at the Festival? What are you most looking forward to about VDF?

“Just being around his knowledge! Just watching Desmond Richardson teach and listening to what he has to say, his wisdom. I can’t even put it into words! He is just a star, and I think that if I could get just one percent of the knowledge that he has, then I would be so lucky to take that away. It’s such a blessing. It’s incredible that he’s coming to Australia, and holding an audition, and that we as Australian dancers have the opportunity to dance for him, in front of him and share a space with him.”

Although we can’t share a space presently, we all look forward to the day we can dance together again, attend festivals and perform on stage under the bright lights. Soon enough, we’ll be watching a US award show and saying, “Hey, that’s Australia’s Tyrone Anthony on TV!” Tyrone, we are excited to see where the future takes you!