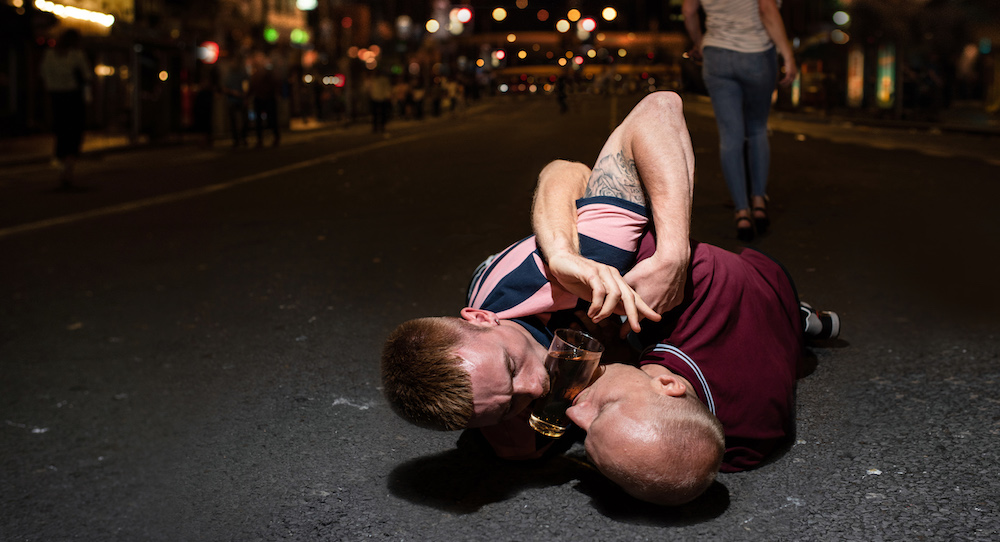 The last time DV8 Physical Theatre performed Enter Achilles at the Adelaide Festival, it was 1996. Since then, the nascent internet has become a virtual utility, the Brexit/Trump genie has emerged from its bottle to rattle the cage of post-Cold War, Western triumphalism, and the #metoo movement and various clerical scandals have shattered the cultural silence around sexual violence and abuse. Indeed, it may well be argued that Lloyd Newson’s much vaunted mid-’90s meditation on masculinity is now more apt than ever.

For, when Enter Achilles is restaged in Adelaide in March, as part of 2020 Adelaide Festival, it will land in the midst of a fractious, meme fired moment of polemic political theatre. Election season will be warming up in the US, and the backwash from Brexit will be flowing across Europe. As far as director/choreographer Newson is concerned, this is an appropriate time to re-visit a work that focuses on eight men at one pub on one night.

Speaking from London (where he is rehearsing the show), he observes, “I think there’s a lot of the chattering classes that would like to think that the world has changed, that the themes of Enter Achilles no longer exist.”

However, from the perspective of the ‘working class man’ and, furthermore, from within the often restrictive silo of traditional masculinity, the intervening 24 years have made little difference. “What I realised was that all those things that were regular working class issues back in 1996 are just as pertinent now,” Newson adds.

Having been invited to bring Achilles back to Adelaide, Newson pondered its relevance, before throwing himself into research. Reflecting on that, he says, “It’s not long before you realise that masculinity is not going to disappear quickly. Traditional masculinity, that is. Working class masculinity. But I’ve got to say, this work is not a condemnation of traditional masculinity; it’s much more complicated than that.”

In Newson’s case, that complication is rooted in the personal. Born in Albury, the young Newson moved around the country with his Air Force family and was exposed, in numerous locations, to the expectations and limitations that hover around orthodox notions of maleness. For a young, gay man growing up in the regions, this was problematic.

“I have a very complicated relationship with the whole notion of working class masculinity,” he admits. Yet, he still considers himself working class and feels “connected” to that community. This, despite moving to the UK in 1980, and enjoying a stellar, award-winning career in dance.

“We accept that men have traditionally oppressed women,” he continues, “but how oppressive have men been to themselves? [And so] in making this work, it’s very important to me not to vilify, particularly now. I definitely don’t want to vilify working class men…because I understand their rage against the cultural elite.”

Little wonder the company he co-founded in 1986, DV8, has a reputation for challenging the aesthetic and class norms of contemporary dance. As he notes, he is known for saying “dance is the Prozac of the artforms.” He consciously and consistently breaches the stylistic and physical parameters of dance and, indeed, is no great fan. “After about five minutes, I’m bored of the pointy feet and the pretty lines and the abstraction.”

In this light, the narrative and aesthetics of Enter Achilles make even more sense. “But it’s not about every man; and that’s very important,” he clarifies. “I think sometimes people want to generalise, particularly when they come to see dance. They tend to think in huge universals.”

The controversy around the sex doll that features in the work is perhaps emblematic of this. As Newson explains, there has been “some debate” about whether the doll “represented all women”, which it clearly does not. “Dance audiences,” he argues, “seem to have trouble understanding that you can have something difficult or controversial in your work but that you do not support it; and I don’t know why that is.”

Of course, what the doll and antics of the “eight blokes” point at is the ongoing, and often nasty, gender discourse and, beyond that, tribally mandated orthodoxies around manhood. What is a man? What does a man look and feel like? How are these norms policed? “Even as a gay male choreographer,” Newson elaborates, “I am conditioned as a man.”

In turn, standard gender expectations created a casting issue for Newson. “As soon as I walk out the door, I see all the men I could want. They look perfect for the piece, they just can’t dance,” he explains. “But when I go into a dance audition, I look around and out of a hundred guys, I might see two who have the physical look.” Indeed, it was only after a lengthy six-month process, involving auditions in London, Barcelona, Amsterdam and here in Australia, that Enter Achilles found the required eight blokes.

Having already won an Emmy (for the BBC screen version in 1997), the work is set to further enhance its place in the dance pantheon and to underline Newson’s reputation for being a singular and somewhat disobedient dancemaker. In 2020, Achilles and Newson will perhaps ask even more uncomfortable questions than they did in 1996. Questions like: “What I find incredible…is that, if men are in control, why are they three times more likely to take their lives?”

And here is where Achilles enters. Invulnerable, we’re told, except for that heel of his.

DV8 Physical Theatre will present Enter Achilles from 13 – 15 March 2020, as part of the Adelaide Festival. For tickets and more information, visit www.adelaidefestival.com.au/events/enter-achilles.